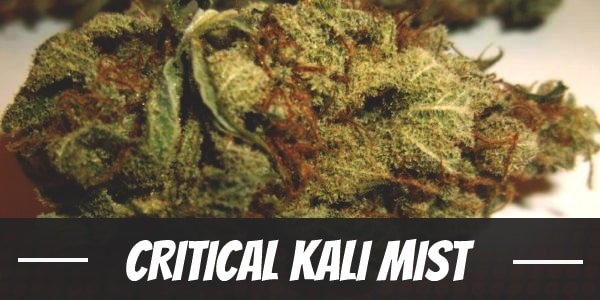 It is difficult to find fault in a strain like Kali Mist, an award-winning Sativa whose claim to fame is its high-flying, energizing effects. In fact, it has become the go-to bud for many enthusiasts looking for a psychedelic experience. Moreover, it has a delicious scent that entices almost everyone in its presence.

Still, Delicious Seeds decided to improve upon its flowering time by crossing it with a sturdy Indica dominant plant. Critical Mass is an exceptional performer in the grow room. It flowers quicker than most strains. A heavy yielder, it also produces a massive amount of heavy-weight buds which it passed on to Critical Kali Mist.

Critical Kali Mist, the resulting Sativa-dominant hybrid, boasts equally high levels of THC (22%) as its parents. In many aspects, it is much like its Kali Mist parent with regard to effects and scent but with the hardy and quick-flowering qualities of Critical Mass.

Critical Kali Mist carries an impressive 22% THC. At that level, one would think the strain is exclusively for experienced users. However, novices may still enjoy the strain with the help of a seasoned friend along with the right amount of caution.

With that said, the bud performs just like other Sativa-dominant strains. It hits incredibly fast with many users experiencing its euphoric effects minutes after the first two or three puffs. The behavioral change is almost immediate too. Smiles stretch from ear to ear and giggles turned to heartfelt laughter escape the mouth.

After about an hour or two, a tingling sensation trickles down from the temples and swarms the body. It soothes each muscle until it releases built-up tension before fully enveloping users in deep relaxation. Keeping it from sinking users into the couch is the persistent uplifting buzz from the mental onset.

Overall, Critical Kali Mist is best smoked during mornings and afternoons. It can also be used just a few hours before a social function such as parties for an added boost of confidence and energy.

Critical Kali Mist smells largely of incense, earthy and woody. Enhancing it is a sweetly refreshing tinge of pine as well as notes of musk that intensifies once the buds are broken apart or combusted. Though many find its scent generally pleasant, likability remains to be a personal preference.

Drawn in, Critical Kali Mist fills the palate with the taste of hardwood and incense. Its strong woody hints are accompanied by the flavor of wet soil which make the bud seem freshly picked. On the exhale, the same subtle sweetness is present as the refreshing aftertaste of pine washes over the mouth.

When it hits, the fast-acting and potent effects of Critical Kali Mist can make users feel dizzy when it hits. In addition, it can also cause some to feel a little paranoid. Although newbies mostly experience this, seasoned users can too especially in high doses. For this reason, it is important to practice moderation during sessions.

All cannabis strains cause consumers to get a cottonmouth to some degree. Don’t get worried though as that reaction seldom causes discomfort. In any case, there’s a quick and easy way to manage it. To do so, all that’s needed is to stay hydrated before, during, and after using Critical Kali Mist.

Critical Kali Mist busts out stress with its high levels of THC, but that is not all. In inducing its happy high, it temporarily appeases symptoms of depression and other mental health issues like PTSD. It calms the mind and gets rid of the overwhelming dread that often destabilizes hormones essential for mood management.

The same psychoactive compound also provides comfort to users suffering from chronic pain including those caused by muscular spasms. Its soothing buzz, which begins from the temples, also calms the twitching pressure from behind the eyes that, if left unattended, can lead to glaucoma.

Critical Kali Mist inherited the sturdy structure of its Critical Mass parent. Its stalk is sturdy in spite of its Sativa-leaning height and is not easily swayed by strong gusts of wind. Moreover, its thick branches do not break easily at the weight of its heavy, compact bud which are more Indica in shape.

But, that is not all that makes Critical Kali Mist a great addition to one’s choice plants. It has high resistance against problems caused by high levels of moisture such as mold, mildew, and fungus. And, despite its propensity for a Mediterranean climate, the plant still performs well in the colder weather of the northern hemisphere.

Indoors, growers may need to top the plant or prune the main stem early to manage its height. Otherwise, it will outgrow areas with limited space and inhibit light distribution to the lower-end branches. Applying the Screen of Green method also helps improve air circulation while improving yield and trichome production.

Because it is available in feminized form, aspiring growers need not worry of male plants or females turning into hermaphrodites.

Critical Kali Mist finishes faster than other Sativa-dominant strain, usually flowering between 8 to 10 weeks. Once mature, users harvest around 18 ounces of buds per square meter.

In a garden or farm in the northern hemisphere, Critical Kali Mist grows just as fast. Flowering around October, from the second to the last week, it yields 35 ounces worth of cured buds per plant.

Have you ever smoked or grown your own Critical Kali Mist? Please let me know what you think about this marijuana strain in the comments below.