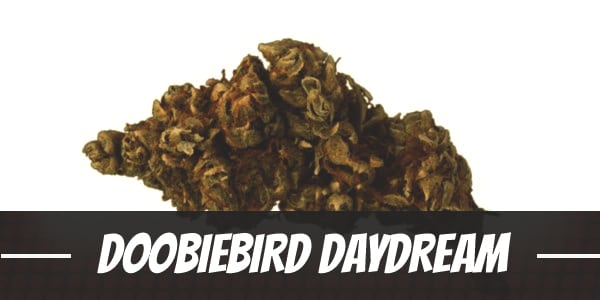 Doobiebird strain finds a place among the top potent strains with its THC levels average at a consistent 22%. It induces a tingling euphoria that uplifts the spirits, clears the mind, and revitalizes the body. Perfect for a wake-and-bake, one could say it can take the place of coffee.

It gains its dreamy aspect and Sativa expression from Blue Dream. It has the sweet scent and taste of ripe berries which gently entice the senses. Upon consumption, users are swept in a dreamy haze that relaxes both the mind and body.

Sanjay Gupta Kush, on the other hand, contributed to Doobie Daydream’s therapeutic qualities. The strain itself is named after neurosurgeon and CNN’s Chief Medical Correspondent after seeing how it has enhanced the quality of life for many medicinal users of marijuana. As such, it should come as no surprise that the bud provides quick relief to a myriad of health issues and is just as effective as pharmaceutical medication.

Medical users of marijuana will find Doobiebird Daydream to be just as efficient as its Sanjay Gupta Kush parent. It provides a powerful reprieve against mental and physical afflictions that would otherwise interfere with one’s wellbeing.

Doobiebird Daydream is a quick-acting strain that delivers its effects within minutes after the first two or three tokes. Its euphoric smoke awakes the mind, clearing away cobwebs that slow it down. It leaves users pensive but also happy as cheerful memories take the place of worries.

Preparing snacks ahead of time would be a good decision. The stimulating buzz awakes the appetite, making dishes seem tastier than ever. Having some food an arm’s length away will be convenient for working enthusiasts, but users are also free to concoct delicious recipes in the kitchen.

A tingling buzz ensues after about an hour or two. It starts around the temples before trickling behind the neck and down to the lower extremities. Bringing with it a deep relaxation, it kneads the muscles free of tension so users can move like a well-oiled machine. This makes Doobiebird Daydream an excellent wake-and-bake strain that gives users the energy to last throughout the day. Moreover, it helps clear the mind of worries, so one stays upbeat.

Doobiebird Daydream has a sweet scent reminiscent of vanilla extract. There is a hint of spiciness which complements its saccharine profile. Crushing and combusting the buds, on the other hand, reveals an earthy undertone.

Its strong vanilla flavors take center stage in the palate. It is sweet with notable hints of berries. On the exhale, it leaves a spicy but earthy aftertaste.

Red eyes and a cottonmouth – two typical reactions to cannabis’ moisture-inhibiting cannabinoids. Although barely noticeable, the long-lasting dry spell is manageable through avoiding caffeine or alcohol and staying hydrated throughout the day. There may also be a slight headache, although that is rare; happening only after going beyond moderation.

Boasting up to 5% CBD, Doobiebird Daydream has many uses outside of the recreational realm. It can alleviate stress, calm the nerves, and melt away worries to replace it with an inner sense of calm. It invigorates the mind too, bringing back one’s lost zest for life as it piques interest.  In doing so, it also helps manage the symptoms of depression, anxiety, and PTSD such as an overwhelming dread and feelings of hopelessness.

It brings back a feistiness in one’s spirits, fortifying the mind and body. In raising energy levels, the Sativa-leaning bud could fight against fatigue. It releases tensions all over the body that tighten the muscles and prevent patients from moving around freely. Similarly, its painkilling properties also assist in the relief of various physical aches and pains.

A potent anti-inflammatory Doobiebird Daydream has the capacity to relieve inflammations and reduce swelling albeit temporarily. It also prevents the muscles from contracting or constricting painfully, resulting in spasms. For long-term treatment and identifying the cause of the problem, seek the help of a medical professional.

Leaning only slightly toward the Sativa side, the influence of Indica in Doobiebird Daydream is apparent. It has a manageable height, growing to a mid-stature rather than towering over other plants. It also has impressive strength in its structure, evident in its above-average resistance, sturdy frame, and branches that do not snap even when weighed down by the density of its buds.

Doobiebird Daydream can quickly adapt to any type of environment – indoors, outdoors, or greenhouses – and media. Soil, however, would be a good choice for increase production of terpenes. After all, the chemical compound’s use is not only limited to flavor or fragrance, but also for a multitude of benefits. However, growers may still use a hydroponics setup to hasten the growth cycle without sacrificing the yields.

Experienced breeders may apply advanced growing techniques like the Screen of Green. It encourages lateral growth by gently weaving the branches into a net situated a few inches above the plant. Pairing it with another method called topping, removing the top colas, will help the Sativa develop multiple budding sites.

Indoors, provisions could be made to accommodate changes in lighting fixtures, as well as ventilation and fan installation. Switching to a 600-watt HID light during the flowering period assists in bud production. Meanwhile, a proficient ventilation system helps reduce high levels of humidity. The fans, on the other hand, are put in place to air out the plant and strengthen the stalk.

TIP: Buy seeds like Doobiebird Daydream at our seed shop

Doobiebird Daydream has a short flowering period of 8 to 9 weeks. It yields between 12 to 16 ounces of buds per square meter once ready for harvest.

With lots of natural sunlight, Doobiebird Daydream can blossom up to 16 ounces of flowers. Harvest usually falls around the middle of October.

Have you ever smoked or grown your own Doobiebird Daydream? Please let me know what you think about this marijuana strain in the comments below.