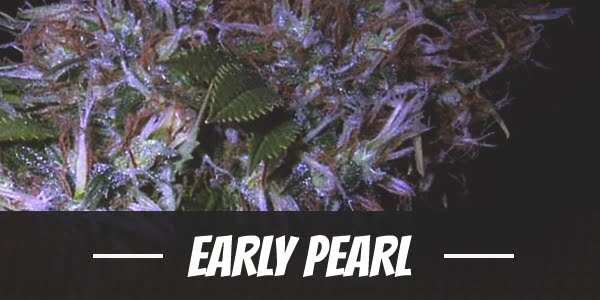 Most cannabis varieties thrive in a warm environment. A few who do survive the colder climate mostly comes lacking in potency. Hence, in developing Early Pearl, Sensi Seeds had a clear objective: that is to create a hybrid that can produce potent buds even when grown in cold climates.

One of the challenges specific to Early Pearl was that it is a Sativa-dominant strain. Typically, these types of plants do not fare as well as Indica in areas where summer season is short.

The solution, therefore, is to engineer the hybrid to have the Indica structure while retaining most of its Sativa heritage. In doing so, Sensi Seeds also created a strain that has proven to be resistant against the damp and humid conditions typical of the northern hemisphere.

Because of its ability to withstand cold, no longer is potency compromised. Early Pearl is a gift for northerners who have long sought for a remarkable Sativa strain that they could cultivate. For over twenty years since its release, it has rewarded growers with massive crystal-coated buds that delivers a highly stimulating mental high.

Go big then go home, that’s the deal with Early Pearl. It first brings users to an energizing high before gradually settling down. Not only is it a fast-acting strain but with 15% to 20% THC, it is also very potent.

Soon after taking a few tokes, Early Pearl induces a euphoric head high that brightens up the day. It causes users to be cheerful and talkative making it an excellent party strain.

Besides feeling upbeat and reinvigorated, the clear-headed high in the early stages also comes with a sharper sense of focus. It inspires users to stay motivated in finishing tasks or chores, for example.

Gradually, the slight pressure felt on the temple of the head starts to ebb down to the body. As it spreads to the extremities, the Indica traits of Early Pearl soothes the muscles. Instead of overwhelming the body, it complements the mental high by inducing a gentle relaxation.

Being such a potent strain, it is possible that some people may end up smoking a little bit too much. In that case, its mental and physical effects can be quite intense. Some may experience a speedy high or simply find themselves in deep introspection. Either way, the chances are high that they end up in a couch-lock as well.

One thing that users can also expect especially as the effects of the strain subsides is feeling hungry. As much as its psychoactive properties can induce a psychedelic experience, it also stimulates the appetite.

Early Pearl has a pungent odor of skunk blending in with the smell of damp earth. It also has a sweet floral fragrance with a hint of wood. After breaking the bud into smaller pieces, it releases a spicy, herbal scent.

The flowery aroma of Early Pearl is evident. However, its smoke may be a little bit rough on the throat. Nonetheless, its sweet note and aftertaste of tea are more than enough to compensate.

Cottonmouth is one of the most typical adverse effects of using Early Pearl or any strain for that matter. Some people may also experience, to a lesser degree, dry eyes. Such conditions are often mild, and most people simply fail to even recognize its symptoms, but that is dependent on the amount of herb used.

As alluded to, one of the manifestations of the strain, when one overuses, is a speedy high. As such, it may overwhelm some people and cause a few to feel a little anxious or even paranoid. As a rule, always use marijuana in moderation.

Like many others, Early Pearl does not have a high CBD value. Hence, it does not have any benefit to people with seizures or epilepsy. Nevertheless, it is the psychoactive properties that give the most benefits to its medical users.

The euphoric high induced by the strain and complemented by its soothing body effects is a great stress-reliever. Because it enhances the mood, it may even provide people suffering from depression or PTSD a degree of comfort. Besides the behavioral changes, its ability to improve focus may be beneficial to those with ADD/ADHD.

Developed by Sensi Seeds to withstand cold climates, Early Pearl is a sturdy plant that even beginners can cultivate. Although it is a Sativa-dominant strain, its structure is more like an Indica. To this end, the breeder has succeeded not only in creating a plant that has a high THC value but also quite a vigorous producer.

Thanks to the efforts of Sensi Seeds, growers in the northern hemisphere have a Sativa-dominant hybrid that they could grow. Even better, its flowering period is only 8 to 9 weeks. Once ready for harvest, each square meter of the plant can produce between 10 to 12 ounces of buds.

Even in cold regions, Early Pearl thrives best when it receives plenty of sunlight. Typically, the flowering period occurs in the second to third week of September. Once mature, growers can expect a yield of no less than 12 ounces.

Have you ever smoked or grown your own Early Pearl? Please let me know what you think about this marijuana strain in the comments below.