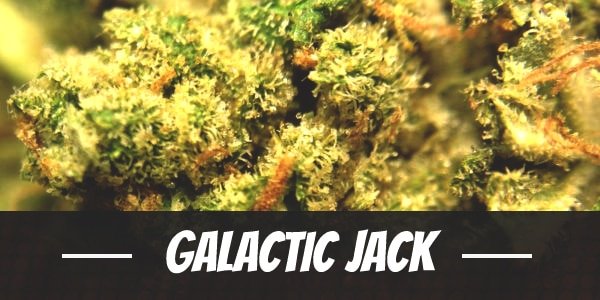 Experiencing the cosmos is now possible thanks to Galactic Jack and its out-of-this-world high. This hybrid, known for its iconic Sativa effects, encourages a general sense of well-being and cheeriness. A cross between two of the finest there is, nothing short of exceptional is expected, and that is what it provides.

TGA Subcool developed Galactic Jack using two mostly Sativa strains. First is a hybrid they named after the famous marijuana activist Jack Herer. It is a universally loved hybrid that was released in the 90s and has since won multiple awards for potency and quality.

The female Jack Herer was then paired with a male Space Queen. Bred by Vic High, this strain is notoriously potent and can induce a trippy and speedy high.

As is expected when crossing two Sativa strains, its heritage is passed on to the offspring.

Man’s final frontier may be space but achieving this doesn’t have to mean leaving the Earth’s atmosphere. In fact, some days, all it takes is a swig of Galactic Jack to reach a cosmic high. With its insanely high THC content of 21% to 23%, be prepared for a blistering buzz.

A great recreational strain, it sends a powerful energetic buzz into the mind and the body in no time at all. While intense, the mental euphoria is not mind-bending. In fact, it clears the head and inspires free-flowing creative thoughts. Users, energized by the Galactic Jack, are likely to find themselves hyperactive with unlimited energy. Getting things done is made more fun by the uplifted mood.

Staying focused is not an issue at all. In fact, most people are more likely able to lock in on tasks. However, overusing the strain can cause the effects to amplify. In that case, users may find themselves on a wild ride across the galaxies.

Galactic Jack emits a sweet and citrusy scent with a skunky note. Its unique aroma also has a hint of pine and herbs.

The lemony aroma of Galactic Jack is quite apparent in its flavor as well as the taste of grapefruit. It also has a mild hint of skunk. In essence, its flavors are exactly like how it smells.

Having dry eyes and a dry mouth are typical reactions to smoking any marijuana, including Galactic Jack. It can also cause slight dizziness or a headache. Typical of potent Sativa, it can cause some people to feel anxious or even a little paranoid.

Through its psychoactive properties, Galactic Jack can provide medical benefits for its users. It delivers a euphoric high that puts people in an upbeat mood. In the process, it wipes out stress. Consequently, it benefits people with mental issues including depression by uplifting the spirit.

As mentioned, this strain gives users unlimited energy. At least, that is how it feels like. Hence, some people use it to ward off fatigue especially if there are things to do.

Currently, there are four known phenotypes of Galactic Jack of which three are more similar to Jack Herer. Regardless of which, all are mostly Sativa and does not differ too much in growing traits. Like most others, growers can choose to plant it indoors or outdoors.

It can be a little finicky though and will require experienced or expert hands. Besides the maintenance, the ambient temperature should also be closely monitored especially when grown outdoors as it does not tolerate abrupt changes well. Hence, beginners should find another strain to cultivate.

The indoor flowering time for Galactic Jack is estimated to be between 8 to 10 weeks. This might seem like a longer amount of time than usual, but it is quite typical of Sativa dominant hybrids. Once harvest time comes, this strain produces about 8 to 10 ounces of buds.

Galactic Jack thrives best when it is cultivated in warm temperatures. With the right amount of care, it can flower as early as the last week of September. During harvest time, growers can expect it to yield no less than 10 ounces of buds per plant.

Have you ever smoked or grown your own Galactic Jack? Please let me know what you think about this marijuana strain in the comments below.