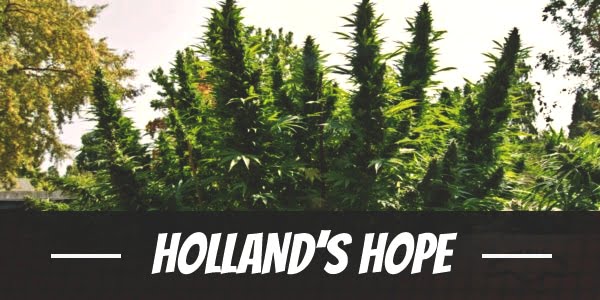 A problem that cannabis growers have in Holland is its climate. As such, many strains are impossible to cultivate. In response to that, one breeder created a hybrid that can grow in poor environments.

But such a strain makes no sense if it does not give effects that please users. Hence, people who are looking for an intense cerebral high and at the same time, feel relaxed should look no further than Holland’s Hope.

As alluded to, Holland does not have a climate that is conducive to the growth of cannabis. Even during the summer months, it is not always warm and sunny. For that reason, the best way to cultivate marijuana is indoor. Hence, there is a need to create strains that thrive in a wet or damp environment.

Such is the premise that led to the creation of Holland’s Hope. As its name suggests, this strain gives hope to people who want to cultivate plants outdoor.

Bred using an Afghan Indica and Dutch Skunk, Holland’s Hope is an 80% Indica plant. Even so, its cerebral effects are much more pronounced than expected.

So, the strain gives hope to the Dutch outdoor cannabis growers. With regards to its effects, is there anything to hope for?

Holland’s Hope is not a fast acting strain, but once it starts to creep in, users feel a fog fading from their minds. Clear-headed, the sensation washes all over the body in which users feel their mood swinging. In fact, it is the uplifting feeling of this strain that many of its regular users sought.

A surge of energy also courses through the body. As ideas come one after the other, the boost in creative thinking and a heightened sense of focus makes users more productive. Accomplishing tasks one after the other becomes easy.

The cerebral effects described here may as well be describing a Sativa plant. But this strain is Indica-dominant, as such, the body relaxation continues to intensify. In most cases, it does not induce a numbing buzz. Instead, users are still able to remain productive. For that reason, Holland’s Hope is an excellent marijuana strain for daytime use.

Keep in mind, though, that it has more than enough potency to leave one stoned if overusing.

Holland’s Hope has a mostly fruity odor with a very mild skunky tone. Anyone who catches a hint of its scent should find it appealing.

While some people may feel that its aroma is underwhelming, it does come with an excellent flavor. Its smoke has a sweet and fruity taste to it with a hint of pine and citrus lingering as an aftertaste.

Using marijuana has its benefits. For recreational users, whether it is for clarity and mood swing or relaxation, there is a multitude of choices. But far more than recreational uses, it is the medical benefits it provides that makes it valuable.

Still, it is not without its adverse reactions. Dry mouth and eyes are very common with the use of cannabis. Also, possible annoyances are dizziness, a headache or even feeling mild anxiousness.

These reactions are not dangerous but more nuisances. But if one overuses, then it can become more pronounced.

Because of its incredible mood-altering effects, Holland’s Hope is deadly when it comes to striking the word stress off the vocabulary. Furthermore, it may be beneficial to people dealing with depression.

By taking away the focus from the pain itself, as well as the relaxing high it brings, patients suffering from chronic illnesses may benefit as well in dealing with discomforts.

A substantial boost in energy levels should help combat the effects of fatigue. In this way, Holland’s Hope is unique as most Indica-dominant strains tend to lead to a couch-lock.

Holland’s Hope, due to its being developed for damp climate, makes it a hardy plant. In other words, that makes it an easy plant to cultivate that even beginners can start with. Furthermore, because it is resistant to molds, that makes it even easier.

Outdoor, it can grow up to 6-1/2 feet. But growers can also choose to grow it indoor. Using hydroponics is the best as it leads to explosive growth. For better flavors, the soil may be a better medium. At any rate, combining it with the Screen of Green training technique can only enhance its yields.

Once thing indoor growers can do is to top early and keep it short. By tending to it with care, it should be ready for flowering in as soon as seven weeks. Most growers, though, opt to delay it for a week to allow the stems to further develop. Once ready for harvest, each square meter has an average yield of 18 ounces.

There is a lot of reasons to be hopeful. One is that the plant itself has significant benefits to both recreational and medical users. Instead of being limited to growing indoor, those who can legally plant it outdoor can do so, even in a climate that is generally not suitable for most cannabis.

Once September sets in, it will not be long before Holland’s Hope starts flowering. In no time at all, growers can expect to pick 22 ounces of buds each plant.

Have you ever smoked or grown your own Holland’s Hope? Please let me know what you think about this marijuana strain in the comments below.