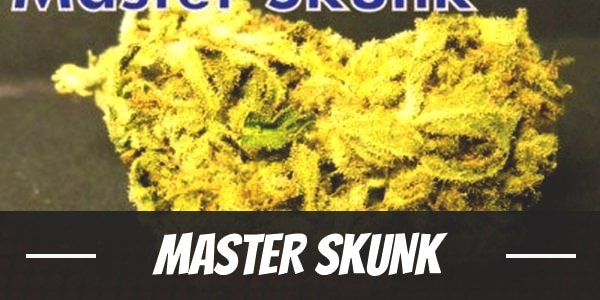 Cannabis hybrids are either balanced or leans towards one or the other end. In the case of Master Skunk, it is a little different in the sense that some people think that it is a balanced strain. Others insist that it is Indica-dominant. Regardless, it delivers a gentle cerebral high complemented by a pronounced body relaxation.

In most part, that Master Skunk would lean towards the Indica side is a result of crossing the balanced Skunk No. 1 with the Indica-dominant Master Kush.

As everyone should know, Skunk No. 1 is among the most prominent family of strains in the world of cannabis. Its genetics has spawned countless others over the past four decades. Among its most notable traits are the energetic buzz that it delivers as well as its ability to crush stress.

Master Kush, meanwhile, traces its roots to landrace strains in the Hindu Kush region. All over the world, many Indica-dominant hybrids deliver body relaxation. As they do so, often, they can also cause a foggy head or mind-bending effects. Master Kush, though, does not have that kind of effect. Its users often feel utterly relaxed with excellent mental clarity and sharper focus.

It appears that the original breeder of Master Skunk is Mr. Nice Seeds. Unfortunately, they have either stopped the production or ran out of stock. Seeds remain available, though, as there are others who have continued the lineage such as Sumo Seeds.

From the introduction, it may appear that we are describing a strain that has average potency. Indeed, cannabis hybrids that exhibit the same traits often have around 12% THC. Of course, that is not true with Master Skunk. The fact that it contains up to 19% making it very potent is a testament to its exceptional genetic lineage. Not to mention, credit goes to the original breeder for the work they did to finally come up with this strain.

Early on, most of the effects delivered by Master Skunk are cerebral. The euphoric sensation is not only pleasing but also uplifting. Users of the strain often feel cheerful and in many instances, are more sociable. The same gentle mental buzz also results in mental clarity and better ability to focus. Also, it inspires creativity. Hence, users are able to go on with their tasks.

Soon, the Indica side of Master Skunk starts to make its presence felt. As the warm body buzz creeps in, users begin to feel their body relaxing. The soothing sensation can be quite intense, but it does not lead to laziness or lethargy. That is not to say that it is impossible for users to find themselves in a couch-lock, though. Use more of it, and that can occur. At any rate, the full-body relaxation is conducive to drowsiness, and most people end up taking a nap or sleeping through the evening.

Skunk No. 1, besides its effects, is also known for its pleasing aroma. As expected, Master Skunk did inherit the same skunky note with a twist. It comes with a sweet lemony note. On its scent, this strain can more than hold its own among the picky cannabis users.

An exceptional hybrid should not only have a pleasing aroma, and that is how the strain is when it comes to its flavor. Much of how Master Skunk smells carry over. Upon exhalation, traces of Master Kush are evident with the lingering woody aftertaste.

The intense body high induced by Master Kush as it blends in with the mental high may cause people to feel dizzy. So, that is something to know and understand before using this strain. Other than dizziness, users can also expect the typical reactions associated with using cannabis – dry eyes and cotton mouth.

Because the strain does not come rushing in like a tsunami, it is easy for some people to assume that it is not as potent as advertised. To a certain degree, that may be true as the THC content of marijuana is largely dependent on its growing condition. All things being equal, though, it is the seemingly gentle nature of its onset that causes some to overuse. Once that happens, it may now lead to mild paranoia or anxiousness.

The cerebral high and its mood-enhancing traits of Master Skunk is evident but not potent enough to crush stress like Skunk No. 1. Still, to a lesser degree, it does induce a sense of happiness that will no doubt be of benefit to people with mental illnesses such as depression.

Master Skunk does have potent Indica properties that help soothe the muscle. As a side benefit, it may also help as a pain reliever. Such traits are often sought after by medical cannabis users who have to endure chronic pains and aches.

One of the best uses of Master Skunk is a result of the full-body relaxation it induces. As most people are likely to fall asleep, it helps patients rest. It also allows people with trouble sleeping find quality sleep.

Cultivating Master Skunk is a pleasure. Not that it is the easiest strain, but beginners should be able to nurture it to maturation. Like typical Indica plants, it grows to around 4 to 5 feet tall. Growers also have a choice of its environment.

The best way to cultivate Master Skunk is to use soil as a medium if flavors are important. Most people prefer using hydroponics for explosive growth, though. It is ready for flowering in seven weeks with each square meter under 600 watts of lighting having a yield of at least 10 ounces.

Master Skunk will thrive in a warm climate. Each plant can produce upwards of 12 ounces of buds. The flowering time typically occurs on the first week of October.

Have you ever smoked or grown your own Master Skunk? Please let me know what you think about this marijuana strain in the comments below.