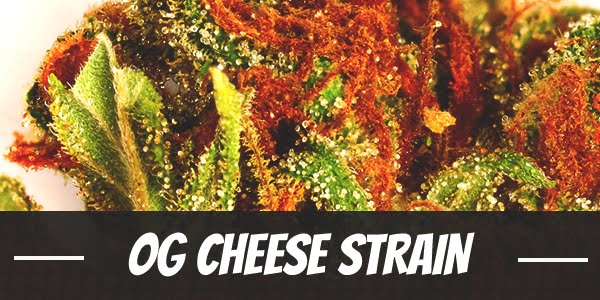 Mac and Cheese, Grilled Cheese sandwich, All-Cheese pizza. Who would say no to that? With its creamy, smooth, delicious sour-salt flavors, cheese has been timelessly tugging at the heartstrings and, of course, taste buds of most people around the globe.

While cheese is a staple ingredient in many dishes and snacks around the world, there is also one for the world of marijuana. Of course, it is not food but a strain so named for its similar flavors.

Developed by GreenLabel Seeds, OG Cheese is a result of crossing Skunk #1 with Afghani. Both of these are deemed to be classic marijuana that has served as a genetic base for countless others.

From Skunk #1, OG Cheese inherited a skunky and melted cheese aroma. It is also a mostly Indica strain – an evident influence of the landrace Afghani.

Smoking this marijuuana fires up the brain with stimulating effects that elicit happy thoughts. Soon after it, a euphoric sensation takes over leaving users feeling utterly elated. Feeling uplifted, users soar to cloud nine with positive mood swing that sets the tone for a fun experience. These cheerful Sativa effects make the strain a perfect choice for socially timid people wanting to become social butterflies.

Being an Indica-dominant strain, the physical effects of OG Cheese not only blends with the mental high but also come on strong. It delivers a numbing buzz that leaves users in a couch-lock while in deep relaxation. Because of that, smoking the strain is a great way to de-stress and unwind after a strenuous day.

Crumbling the bud emits a distinct, flavorful cheese aroma with fruity and creamy undertones. Once combusted, the strain produces a pungent, skunky smell reminiscent of its parent Skunk #1.

For some, especially for strain greenhorns, the fragrance can be strange in a good way. But to those who are used to pungent strains, smoking OG Cheese would leave them without a flinch.

Similar to its smell, this marijuana carries a taste of melted cheese. It also has a tinge of creamy and skunky notes that come through in the first few tokes. Puffing out the smoke gives its users a piney and floral aftertaste.

Experiencing dry mouth and dry eyes are common when taking using marijuana and OG Cheese is no exemption. At times, too, some people may also experience having mild headache or dizziness.

One thing that users must be aware of is that there are also a few people who feel a little bit paranoid. Not that it is a serious concern. Far from it, some people actually enjoy the contrasting effects. However, those who are already dealing with such conditions medically will want to look for other strains.

Medical marijuana users who use OG Cheese are particularly after its potent analgesic properties that can relieve pains and inflammation. Also, people who experience muscle twitching and rigidity, however transitory or persistent, turn to this strain to alleviate the symptoms.

Besides providing relief from physical discomforts, it also enhances the mood. As the strain induces elation, users often forget the stressor as the mood turns from sour to upbeat. Moreover, people with depression can use it to help them deal with the condition.

Lastly, picky eaters and those who have poor appetite can also benefit from OG Cheese. By taking a few tokes of it, the psychoactive properties of this strain can stimulate the appetite.

OG Cheese produces beautiful and dense nugs that can weigh up to one ounce. It is also covered with crystals and resins with visible pistils. Like typical Indica plants, it only grows to 2 and up to 3 feet tall. As such, it tends to be bushy. It also has a quick flowering period regardless if plants indoors or outdoors.

On appearance alone, this plant is a looker. But to make it even better, bring out the purple hue by placing the plant in an area that is 10 degrees colder than the average temperature.

Regarding its yield, growers should look forward to a crop of at least 18 ounces per plant by the 2nd to 3rd week of October.

Keep the plant well ventilated to avoid problems associated with poor humidity especially in the tight areas. Cared for properly, it has a flowering period of 7 to 9 weeks with each square meter producing around 14 to 18 ounces.

In the outdoors, the plant should thrive well in a dry and warm climate. The flowering often occurs between the second to third week of October. Once ready for harvest, each plant can produce up to 20 ounces of buds.

What is the OG Cheese strain yield?

How much THC does OG Cheese have?

What are the origins of the OG Cheese strain?

Have you ever smoked or grown your own OG Cheese? Please let me know what you think about this marijuana strain in the comments below.