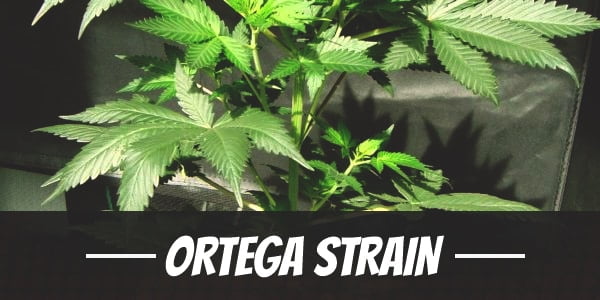 Ortega had been winning users’ hearts since Madonna’s heyday in the 1980s. Being a potent 100% pure Indica strain, it carries all the essentials commonly associated such as relaxing full-body effects, heavy sedation, and hazy cerebral buzz.

It was almost 40 years ago when Ortega first came to be. The original strain, boasting of pure Afghan heritage, was a cross between Nos. 1 and 5 phenotypes of Northern Lights.

In the 90s, Shantibaba did a series of experiments. One of them was backcrossing the original Ortega to Northern Lights No. 1. The offspring was named Ortega No. 3. Work did not stop here, though. In the subsequent years, other people worked on improving the strain. In particular, a fundamental improvement was to remove its morning-after effect.

The modern-day iteration of this classic marijuana produces a profound mind-body buzz that first manifests as a clear-headed high before leaving users in a couch-lock and heavily stoned.

Ortega has between 15% to 17% THC. In some tests though, a batch was tested to have as much as 28%. At any rate, this is one very potent marijuana.

As mentioned earlier, it promotes a clear head at its onset and possibly even inspire creative thinking. As its effects become more pronounced, users may start feeling spacey. Gradually, a warm buzz begins to ebb down to the body.

During this time, as the calming sensation envelops the body, Ortega promotes a sense of well-being. Feeling uplifted and pleased, most users also tend to be giggly.

Meanwhile, the Indica traits start being assertive. With a sedating property that soothes muscles, the immensely relaxing buzz is more than potent enough to put people on a couch-lock.

Ortega does not cause a mind-bending mental high even as it leaves users utterly in bliss. The chances are high, too, that most will end up sleeping.

Ortega emits a sharp fruity, spicy berry scent that is indeed a delight to the senses. Upon breaking or grinding the buds, it releases a distinct dank smell.

The same berry fragrance is evident in its flavors. Upon drawing in the smoke, its fruity blend comes with a spicy pepper note with an herbal quality.

While it’s true that all marijuana strains give users the much needed or craved high, its use does come with some adverse effects.

Even in moderate doses, using Ortega causes “cottonmouth” or, in layman’s term, dry mouth. Furthermore, it can also make the eyes feel dry. Especially for beginners, these symptoms can be a little annoying. But for experienced marijuana users, these conditions are nothing new.

With its powerful Indica traits that comes with analgesic properties, Ortega provides a range of pharmacological values to medical marijuana users.

Kicking off a blissful high, Ortega is very effective at melting away mild to moderate cases of stress and depression. A few tokes of Ortega can relieve a range of pain-related ailments from mild to severe. Some users have reported that using it can significantly reduce inflammation, muscle cramps, and headache. It can also reduce eye pressure that is mostly associated with glaucoma. Depending on the users’ physiology, the strain can also be a helpful remedy for neuropathic pain and fibromyalgia.

Cultivating Ortega isn’t as easy as other strains. But by following plant growing best practices, even beginners are likely to nurture it with considerable success. Like many others, it can be planted indoors or outdoors. Under expert care, it rewards the tender loving care with a bountiful harvest.

Because of its rich Afghan origins, Ortega reaches maturity around the first week to the third week of October, when grown in the northern hemisphere.

Inside the house, Ortega has a flowering period of only 6 to 8 weeks when grown with the Sea of Green training method. Per square meter, growers should look forward to an above-average yield of 18 to 26 ounces.

This marijuana strain reaches full maturity in the first to third week of October. Hardworking growers will be able to harvest 20 ounces or more each plant.

What is the Ortega strain yield?

How much THC does Ortega have?

What are the origins of the Ortega strain?

Have you ever smoked or grown your own Ortega? Please let me know what you think about this marijuana strain in the comments below.