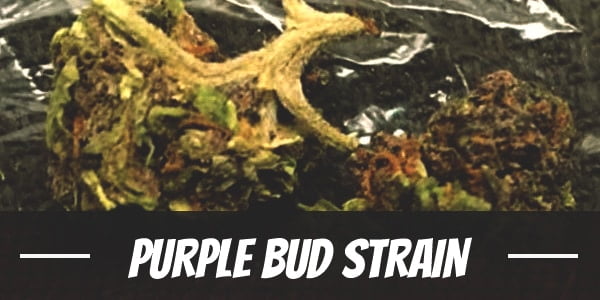 Purple Bud is a highly attractive strain. It has an emerald hue with hints of vibrant forest green. Adding dimension is the color of its buds. Each sport a lush shade, along with streaks of purple that catches the eye which, at times, its nugs can turn completely violet.

However, what truly turns Purple Bud into a standout strain is its effects. It has a soothing euphoria that gently stimulates the mind and a stress-crushing body buzz. It is also quite potent, with THC levels averaging at 18% to 20%. The Indica-leaning herb prides itself in its ease of growth. After all, it does take its structure from four of the most prolific cannabis strains across the globe.

Purple Bud is not one to overwhelm users with a head-slamming high at the onset. Instead, the effects kick in about 15 minutes later, after the first two to three puffs. With that said, it is best to pace consumption of the strain as using too much in a short amount of time can turn into an overwhelming experience.

At the onset, it prefers to introduce itself as a gentle buzz of euphoria that clears away negativity as it swarms the mind. For casual users, the mental clarity and upbeat disposition is a godsend. It transforms perspectives with a rush of creativity as ideas form and flow freely. A sense of happiness begins to ball up inside too, as the subtle mental stimulation brings back cheery memories and pleasant thoughts.

After about two to three hours, a light pressure oozes down from the temples. The creeping Indica body buzz washes over the body in waves, kneading tension out of the muscles and restoring it to a tranquil state. It plants a heaviness in the limbs too.

In all likelihood, users will end up lounging around the couch as the effects intensify. Eventually, the eyelids droop, and one falls sound asleep. Thus, in spite of its seemingly wake-and-bake qualities, Purple Bud is best used at night.

Purple Bud is a sweet-smelling strain that entices the senses with its fruity saccharine overtones of blueberries. Accentuating it is an herbal undertone with a note of spiciness that intensifies once the buds are broken apart. Combusting it, on the other hand, reveals a refreshing aroma of pine and sandalwood.

Drawn in, Purple Bud swarms the palate with its rich overtones of blueberries. Enhancing its fruity profile is the subtle taste of sweet berries. Savoring its smoke on the exhale leaves an aftertaste of pine blended with sandalwood.

Dry eyes and a cottonmouth are common experiences when it comes to smoking marijuana, regardless of the strain. It is also accompanied by dizziness at times. Although mild, the effects can last for hours and can be quite irritating. Downing a few glasses of water and staying hydrated throughout the day will help manage symptoms.

Stress relief is among the most cited reasons for smoking marijuana. To this end, Purple Bud works just as effectively. It induces a happy high that uplifts the mood while simultaneously calming the overwhelming dread one feels toward work or life. Because of this, it is also a source of comfort for patients dealing with depression, anxiety, and other mental health issues like PTSD.

One of the best times to use Purple Bud is a few hours before a meal. Although subtle, the cerebral uplift can also be stimulating to the appetite. It allows users to enjoy a plate of food heartily without worrying about the stomach suddenly cramping.

In high levels, the same psychoactive compound turns into a natural analgesic. It eases away aches and pains beginning from the temples while kneading the muscles out of tension or tightness.

Purple Bud is a sturdy plant. It has thick stalks and branches that do not break off easily at the weight of its buds or inevitable gusts of wind. For this reason, too, it can withstand a variety of unpredictable as well, including sudden drops in temperature. Not only that, it is available in feminized form and assures growers of a full batch of female plants. Hence, it is an excellent option for beginners.

Like other plants, Purple Bud thrives best in areas where there is lots of sunshine. The open space, along with the naturally diverse spectrum of the sun’s rays, help it produce high yields without stunting its growth. It prefers a cool and dry climate, such as that of the northern hemisphere. However, it will need a temporary enclosing in case of an early frost. Otherwise, it might die overnight.

Indoors, Purple Bud should be pruned often. It has a branchy structure with dense foliage that grows sideways. If left unattended, it can harbor moisture in between its crevices which later develop into mold or mildew and stunt its growth. Removing branches and a few of its broad leaves improves light and air circulation in the lower nodes. At the same time, it also distributes nutrients to budding sites better.

The Sea of Green setup works best with Purple Bud. It takes advantage of its small stature so users can maximize yields in spite of having a small growing space. Pairing it with a soilless medium like hydroponics further hastens its already short flowering period. Using soil is also a great option if the end goal is developing tastier buds.

TIP: Buy seeds like Purple Bud at my seed shop

Like other Indica-leaning strains, Purple Bud has a quick flowering period. After 7 to 9 weeks, growers can expect the plant to produce at least 21 ounces of buds per square meter.

In the northern hemisphere, Purple Bud matures from the last week of September to the middle of October. During harvest, each plant yields between 21 to 28 ounces of buds.

Have you ever smoked or grown your own Purple Bud? Please let me know what you think about this marijuana strain in the comments below.