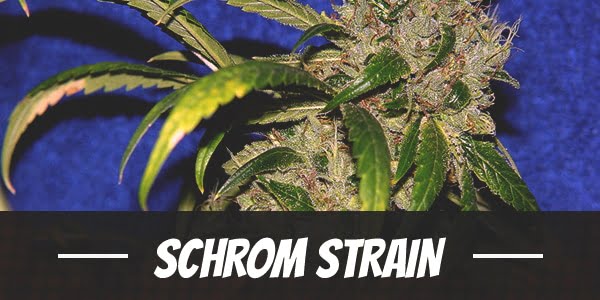 No, this strain is not in any way related to a mushroom. Its nickname was believed to be a portmanteau of its pseudonymous breeder, Schrooomy420, and its female parent that goes by the name Romulan.

Up until now, Schrom’s true heritage remains a mystery for many. But it has been speculated that the strain is an offspring of a Romulan female and Colombian Gold male. However, rumors also have it that it might be a cross between Romulan and Silver Haze. Besides its heritage, even its original breeder remains unknown.

Having said that, as more and more users smoke this strain for its potent Sativa qualities, Schrom’s inexplicable parentage has become irrelevant. The only thing that matters is its ability to deliver an electrifying rush.

With THC content ranging from 16% to 18%, Schrom is considered as moderate to above-average in potency, without the knockout qualities. Hence, it’s almost impossible for users to get heavily stoned, unless one overindulges.

Provided that people consumed the strain in proper doses, expect a rapid rush that settles right into the head, engulfing users in utter bliss and euphoria. As an uplifting energy sweeps over, smokers will be taken out of the melancholic zone, slowly noticing a positive boost in their mood.

The ecstatic joy accompanies a creative high that improves mental clarity. At the same time, a laser-sharp focus begins to materialize. With a focused mindset, users will be able to perform solution-focused and creative tasks, thereby, maximizing their productivity and achieving quality output.

Additionally, little do people know that Schrom is also a sexy strain. Not in terms of its physique, but in its ability to arouse its users erotically. Trying to spice up love life? Adding this strain to the cannabis arsenal can be truly valuable.

Grinding or breaking the buds releases a sharp citrus aroma that is both sour and sweet to the smell. The scent is so strong that smoking it in a room can fill up the entire space, dispersing lemon and lime notes that last long.

Not only does Schrom have a pleasant fragrance, but it also does tickle the taste buds. Smoking the hybrid produces a fresh lemon and lime with a tinge of sweetness.

A couple of puffs of Schrom can cause a dry throat. Dry eyes can also be experienced. These symptoms are not serious as to make someone ill, but it may be a cause for discomfort especially among the first-timers. Having a headache is another possible adverse effect. Experiences users know all too well these conditions.

Schrom is not only marketed solely for recreational use. As medical cannabis, the benefits of the strain is best enjoyed by patients, too.

One of the excellent values of smoking this hybrid is its ability to dramatically ease depression. A lot of sufferers who didn’t respond well to medications are turning to this strain to improve their symptoms. A few tokes can turn mentally troubled people into cheerful individuals. It indeed can work like magic. Besides, those who are plagued by the daily stresses of life can also take solace in Schrom.

As the Indica traits manifest its effects, different types of aches and pains won’t stand a chance with this marijuana. In fact, it can even alleviate muscle tension, sending sedating effect in the entire body.

Upon taking this strain, users would find themselves eating more food than they did pre-smoke. That suggests that Schrom can help stimulate one’s appetite.

Shrom features its compact, firm, and tiny forest-green nugs along with its rich amber pistils. These flowers are coated in crystalline trichomes and sticky resin.

The strain can be cultivated at home or outdoors. In an outdoor environment, the plant calls for a warm climate.

The strain, cultivated indoors, has a flowering period of 9 to 11 weeks. Granted that growers properly conformed with basic growing principles, they will be able to produce a yield of roughly 12 to 14 ounces per square meter.

Just like most Sativa strains, Schrom calls for a warm environment. A diligent grower can generate a yield of at least 14 ounces for each plant. It should be ready for harvest in the middle to latter parts of September.

Have you ever smoked or grown your own Schrom? Please let me know what you think about this marijuana strain in the comments below.