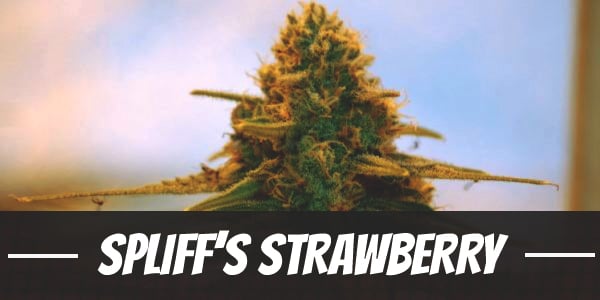 Spliff’s Strawberry traps users in a whirlwind of ideas that, in spite of the hours that pass, remain abuzz all throughout. Its high levels of THC, which average at around 18% to 22%, boosts moods, appetites, and energy. And, with its wake-and-bake qualities, it inspires users to stay productive with a touch of creativity.

Of course, nothing short is expected of the Spliff Seeds masterpiece. It not only carries high THC levels but also has some of the finest genetics in the world – Strawberry Cough, Skunk #1, and Jack Herer. From the first, Spliff’s Strawberry gained its delicious fruit-flavored terpene while the second influenced its strong Indica structure. However, its high-flying cerebral and bodily effects are from the last of the bunch.

Though many believe Spliff’s Strawberry to be a recreational strain, it is actually classified as a medical one. Hence, its ability to temporarily relieve pain and aches while easing symptoms of depression – making it a pharmacologically valuable strain.

Like other Sativa-dominant strains, Spliff’s Strawberry delivers a rush of energy almost immediately after the first few puffs. It leaves users feeling reinvigorated through and through. In the mind, it inspires a creative surge that helps thoughts flow to and fro into an an amalgam of profound ideas.

The upbeat disposition also encourages users to be more open, socially. It enhances self-confidence while sparking one’s natural curiosity for theories opened through discussion. Some even use this opportunity to further develop concepts.

Still, there are many who prefer heading to the desk to take a look at tasks or projects with a renewed perspective. With heightened motivation, users solve problems with innovative solutions. The sense of focus also allows one to work tirelessly for hours on end as the mental euphoria persists.

A great wake-and-bake strain, Spliff’s Strawberry is best used in the morning or early afternoon. Preferably, a few hours before a brainstorming session to fully take advantage of the sharpened mental faculties. Using it at night will only keep the eyes open unless one prefers working late.

Spliff’s Strawberry smells like a basket of strawberries. A single whiff reveals its pleasant fruity undertones while further inspection showcases its subtle floral notes. Accenting it is the subtle scent of fresh herbs which, when the buds are combusted, give off a nice skunky fragrance.

Once drawn in, the flavor of mixed berries immediately enters the palate. Complementing it is the sweet taste of overripe strawberries. On the exhale, it leaves an earthy aftertaste of wet soil.

Most users experience dryness in the eyes and in the mouth while smoking Spliff’s Strawberry. Such effects are not a cause for concern as it is often the body’s natural reaction to marijuana’s moisture-inhibiting cannabinoids. Moreover, both are temporary and mild. But, in the rare occasion that it does get bothersome, users only to stay hydrated throughout the day to relieve the ache.

When misused, Spliff’s Strawberry can “green out” users. The condition is often characterized by a dizziness and heightened awareness that can possibly lead to either anxiety or paranoia. Thankfully, it is rare occurrence that often only affects those who use beyond limits. Taking it slow and refraining from overindulging, however, will keep such effects at bay.

Spliff’s Strawberry is a natural anxiolytic. Its effects calm the mind and temporarily disconnect it from ongoing problems or worries. In a similar manner, it reduces stress which is often plagued by the same overwhelming dread that worries bring. As a result, too, the bud provides comfort to users going through depression or are dealing with mental illnesses like PTSD.

An appetite stimulant, Spliff’s Strawberry also encourages users to eat a hearty meal with gusto. It soothes away the pangs caused by hunger and relaxes the stomach. For this reason, it is a great companion for patients diagnosed with cachexia or those who are suffering from cachexia due to illness.

Its stimulating effects are also great for fatigue. It sends a surge of energy throughout the body that reinvigorates users mentally and physically. Moreover, it restores one’s sense of motivation.

Though predominantly Sativa, Spliff’s Strawberry retains the short stature of its Indica genes. It also produces dense buds rather than the usual fluffy structure that it is expected to produce. However, the plant remains lanky. Its stalks are thin while its branches require extra support as too many of its heavy nugs may possibly break it off. And, for this reason, it may not be a great beginner’s strain.

This is not to say that novice green thumbs should not grow Spliff’s Strawberry but that it may pose as a challenge. After all, it is quite sensitive. A little too much feed, which is a common mistake among inexperienced growers, can develop into nutrient burn and lead to its demise.

It thrives in organic and man-made environments where growers have the power to adjust important factors such as lighting, temperature, and humidity. Although, those from the northern part of the world will have to wait long. It flowers late when exposed to the cold weather compared to it being cultivated in a subtropical climate.

With that said, the plant is highly adaptable to various growing techniques. It reacts well to the Screen of Green but is also suited for the Sea of Green due to its Indica-like structure.

Adding to its appeal is its availability in feminized form. Not only does this make the growing process easier, it also shortens it as aspiring growers need not apply pre-germination methods to get at least half a batch of females.

Spliff’s Strawberry flowers faster indoors than the average Sativa, usually within just 8 or 9 weeks after switching the light cycle. Once ready for harvest, it yields 18 ounces of buds per square meter.

Exposed to the cold weather of the northern hemisphere, Spliff’s Strawberry often

When grown outdoors, cultivators can expect their crop to finish by mid-October at the latest. After that, they can harvest up to 35 ounces per plant.

Have you ever smoked or grown your own Spliff’s Strawberry? Please let me know what you think about this marijuana strain in the comments below.