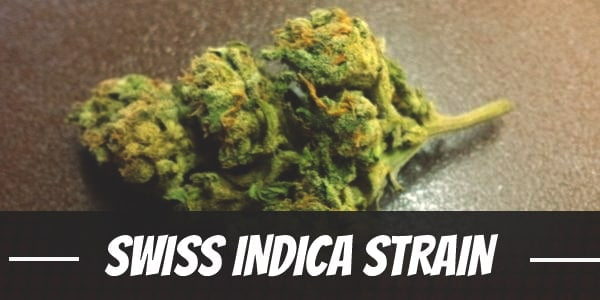 Today, there are tens of thousands of varieties of marijuana. While breeders developed most of the hybrids, some occurred naturally. Also, the earliest ones are typically indigenous to its region. These are the landrace strains that have served as the genetic base for many generations.

For decades, breeders have searched the four corners of the earth for previously undiscovered strains. Some of the most notable ones are Afghani, South American, Thai, and so much more. A lesser known one is the Swiss Indica that is native to the Alps. To be clear, there are also other varieties in the region that leans towards the Sativa too.

As it has yet to hit the mainstream market, there is not much information out on the Swiss Indica. Needless to say, these are exceptionally potent cannabis and incredibly relaxing.

The Swiss Indica contains a massive amount of THC. At 28.92%, users should not take it for granted. Even when used in moderation, its effects are intense and can prove to be overwhelming for some people especially the beginners.

While it is a pure Indica strain, it does make its presence felt by beginning with a gentle clear-headed high. It is quickly followed by a reinvigorating rush that is reminiscent of mild Sativa hybrids.

Gradually, a warm buzz from the back of the head sends a tingling sensation down the spine. As it spreads all over the body, users begin to feel uplifted and have a cheerful demeanor. All this time, most are likely to be quite active and can focus on tasks.

As the Indica properties begin to intensify, it may give users a euphoric rush. That is until it wholly takes effects. Once it does, the numbing and sedating properties of Swiss Indica now leaves users on a couch-lock. At this point, one cannot do anything else but to bask in pure bliss. Before the psychedelic high completely wears off, most people are likely to have fallen asleep.

Swiss Indica has an earthy scent with a sweet and spicy note. After crushing the buds, its odor becomes pungent.

The fragrance of Swiss Indica carries over and explodes with a fruity note of berry once drawn into the mouth. Complementing its flavors is an herbal hint and smoky aftertaste.

The Swiss Indica strain is not at all any different from other marijuana in that it can cause dry mouth and eyes. It is also possible that some people may experience momentary dizziness. While the symptoms are quite mild, it can be pronounced if one uses too much. At any rate, these do not have any long-term health risks.

The strain does not only contain psychoactive compounds. It also has others that bring a wealth of medical benefits, one of which is pain relief. It is this ability that makes it beneficial for those suffering from chronic illnesses. The anti-inflammatory properties it has soothes muscles which result in relaxation. At the same time, it also takes away inflammation and thus can provide comfort.

Once users begin to feel relaxed, the mood swing is remarkable. It is in that way that can wipe out stress. To a certain degree, this can also be helpful in managing conditions such as depression.

Some people have trouble sleeping. The Swiss Indica strain can put an end to the struggles of getting quality sleep.

Most strains worldwide thrive in the warm climate. Unfortunately, this is also the reason why there is a limited choice for people in colder regions. The Swiss Indica, in this case, is an ideal choice. From temperate to cold, it will survive so as long as it is not freezing as to cause frost.

Switzerland is known for creating premium luxury items such as chocolates, cheese, wine, and watches. It also prides itself as the place of origin of the strain used to develop Swiss Gold – one of the best medical cannabis today. Read Full review!

Whether one decides to plant it indoor or outdoor, it will not only thrive but also produce an above average yield. It also has a quick flowering time. Once ready, it will have minty green to olive green buds covered with rich amber to bright orange hairs. By looking at the thick crystals, one does not have to look at lab reports to know it is insanely potent.

Swiss Indica has an indoor flowering period of only 5 to 6 weeks. During harvest, it can produce up to 28 ounces per square meter.

Towards the end of September to early November, cultivators can harvest up to 28 ounces per plant.

What is the Swiss Indica strain yield?

How much THC does Swiss Indica have?

What are the origins of the Swiss Indica strain?

Swiss Indica was created from a Swiss

Have you ever smoked or grown your own Swiss Indica? Please let me know what you think about this marijuana strain in the comments below.