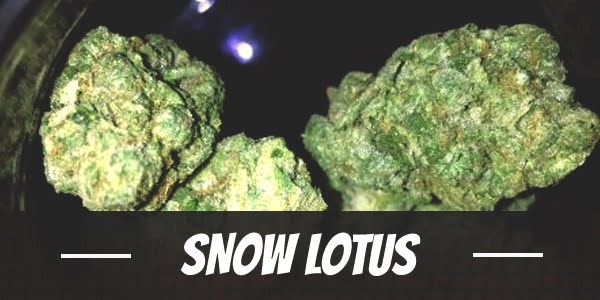 Snow Lotus, also known as Goohead, is a dream come true for lovers of potent Indica-leaning hybrids. Ranging from 16% to 25%, its THC levels make it versatile enough for either beginners and experienced users. Making it even more attractive is its pharmacological benefits.

Though predominantly Indica, Snow Lotus has characteristic Sativa effects. Looking at its lineage, however, explains this. Its parent, the Indica-leaning Afgooey, delivers a mentally stimulating high that encourages wellbeing and groundbreaking ideas. Meanwhile, its powerful body buzz is from the potent Blockhead.

In Snow Lotus, Bodhi Seeds brought out the best qualities of Afgooey and Blockhead. Still, the Indica-leaning hybrid stands on its own among the many premium strains dominating the cannabis industry today.

Though its genes are predominantly Indica, Snow Lotus is not one to waste time. Almost immediately after the first hit, a euphoric rush swarms the mind and clears away any cobwebs. Taking its place is a surge of creativity that leaves users feeling motivated to finish tasks at work and complete personal projects. Feeling fulfilled, users beam with happiness.

Snacks will have to be prepared ahead of time though. The mentally stimulating brainstorming session is, after all, quite draining. Some may even hear their stomachs grumbling. As opposed to leaving it in the fridge, having food nearby will keep everybody from having to move around,

Reveling in happiness, many fail to notice the powerful effects of the potent Indica creep in. This is understandable as Snow Lotus does not slam the body with heaviness. Instead, it is calming and barely noticeable but, as it intensifies with each toke, the tingling sensation envelops the body in relaxation.

Snow Lotus perfectly complements its great effects. Its buds emit a spicy musky herbal aroma that is almost like incense. Accompanying it is the pungent fragrance of damp earth. Upon breaking up its buds, a fascinating skunky scent gets released.

Snow Lotus’ smoke is surprisingly chemical in taste. However, a sweet citrus quickly counteracts the flavor once it is drawn in. On the exhale, the refreshing taste of pine lingers in the palate.

Consuming Snow Lotus almost always leads to a cottonmouth. And, with cannabinoids inhibiting the production of moisture in the tear ducts, users likely end up with red eyes. Neither are a necessary cause for concern but, if symptoms persist, a glass of water should do the trick.

Users may also experience temporary dizziness to some degree. In heavy doses, it can lead to a phenomenon called ‘greening out,’ wherein the chemical compounds in marijuana overstimulate the senses, trigger anxiety, and cause nausea. Thankfully, this is a rare occurrence. Still, it is best to either refrain from smoking too much or pace consumption.

The onset of depression is often accelerated by the relentless onslaught of stress. And, when left unchecked, it can suffocate those suffering from it with destructive thoughts and low self-esteem. In appeasing such symptoms, Snow Lotus is perfectly effective. Its happy high calms the mind and relieves the anxiety that often comes with both issues.

Snow Lotus’ high levels of THC also does well for mitigating a variety of physical afflictions. A natural painkiller, it soothes various aches and pains beginning from the temples. And, together with its anti-inflammatory properties, it eases redness and swelling.

Lastly, people may also use Snow Lotus as an appetite stimulant. Its effects make its users hungry, thus making it a good strain to use right before a meal. It can also be a good choice for those with restrictive eating disorders looking to regain their health.

Because of its genes, Snow Lotus is very easy to grow. Its stalks are thick and short while its branches are strong and grow laterally. All contribute to its resilience against sudden drops in temperature or changes in weather so long as it nothing too extreme. As such, even beginners can cultivate the strain.

Adding to its appeal is its short stature. Because it does not take up much space, the plant can be grown and bred in indoors without much problem. Although, aspiring growers may want to prune Snow Lotus often. Otherwise, its bushiness may hamper its own growth.

One thing though, Bodhi Seeds has only made seeds of Snow Lotus available in its regular form. To encourage a higher male to female ratio, growers may apply germination methods such as presoaking or plant more seeds. Exposing the mature female plant to Low-Stress Training (LST) will keep it from turning into a hermaphrodite.

Snow Lotus has an indoor flowering period of 7 to 9 weeks. Once ready for harvest, it yields between 10 to 12 ounces of resin-filled buds per square meter. Applying the Sea of Green method, however, will encourage better turnouts.

Typically, garden grown Snow Lotus blossoms by the last week of September. At times, it may extend to the second or third week of October. Regardless, the herb produces more than 12 ounces of beautiful buds per plant.

Have you ever smoked or grown your own Snow Lotus? Please let me know what you think about this marijuana strain in the comments below.