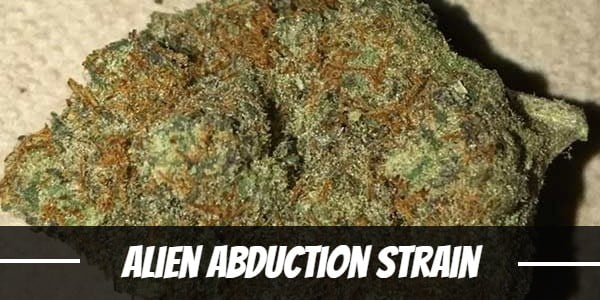 At up to 29%, Alien Abduction easily takes the mind to new heights with its cerebral onset. It stimulates the brain with profound thoughts as one contemplates about the final frontier that is the universe. However, its effects are the complete opposite at the comedown. Rather than traveling back to earth at a rapid velocity, it gently cradles one back to reality and tucks users to bed.

Although mostly regarded for its recreational effects, Alien Abduction remains to be a medicinal strain.

A slow-starting onset often distinguishes Indica-leaning varieties. Alien Abduction has relatively quick-acting effects that begin within minutes after the first two to three puffs. It leaves users feeling happy as an uplifting buzz clears the mind. Replacing worrisome thoughts are pleasant memories that bring a smile to one’s face and an urge to reminisce the past with friends. Because of this, it is a excellent recreational strain.

It is best to prepare snacks nearly, preferably an arm’s length away. Although gentle, its cerebral onset stimulates the appetites and leaves one feeling hungry before the physical effects begin. Having food will save users from a trip to the kitchen as well as the tedious tasks of preparing or looking for something to eat.

After about an hour or two, its intense Indica effects begin. It starts as a light pressure from between the temples that gradually makes its way down to the body. Soothing and calming like waves crashing on the shore, it releases tension from the muscles by kneading it until it is fully relaxed. In all likelihood, users will feel the body melt as it is being weighed down by a heaviness in the limbs.

In spite of its invigorating head high, Alien Abduction is best reserved for nighttime use. Its physical effects, although subtle at first, gradually intensifies until users fall fast asleep.

Alien Abduction has a wet soil aroma reminiscent of freshly unearthed pine. There is a hint of sweet fruit and tangy lemons. Breaking apart the buds reveals a nutty fragrance that quickly fills the room upon combustion.

Alien Abduction’s smoke washes over the mouth with the sweet taste of ripe lemons. Enhancing its saccharine qualities are its nutty undertones and earthy overtones. Meanwhile, on the exhale, it leaves a refreshing aftertaste of pine.

Feeling dehydrated is a common side effect of smoking cannabis, regardless of the strain. Its primary symptoms are red eyes and a cottonmouth, as a result of cannabinoids interfering with saliva production. Both are mild, barely noticeable, and only last for a couple of hours but can be accompanied by dizziness. Seasoned users usually ignore the subtle discomfort, but beginners can manage the symptoms by downing a few glasses of water throughout the day.

A rare possibility that users may experience is greening out. It is characterized by heightened sensitivity that can either lead to headaches or trigger anxiety. Apart from one’s disposition before the high, using too much can be a factor also.  As such, users should stay within limits.

As the product of a medical collective, Alien Abduction has profound therapeutic benefits that provide relief to patients dealing with a myriad of maladies. Among its best uses is reducing stress and managing symptoms of mental health issues. It delivers a calming euphoria that removes overwhelming dread by uplifting the mood and making users forget about problems temporarily. Because of this, it is also an effective anti-depressant.

In improving moods, it also stimulates the stomach. As such, one of the best times to use the strain is right before a meal. Its ability to bring back the appetite is a source of comfort to patients dealing with eating disorders like anorexia.

In high levels, THC turns into a natural painkiller that relieves various aches in the body beginning from the temples. It eases the muscles and blankets users in deep relaxation. In removing the tension, Alien Abduction also appeases fatigues. Meanwhile, its sedating properties help users fall asleep faster and simultaneously improves the quality and quantity of slumber.

Alien Abduction has the growth profile of a typical Indica. It is stout with thick stalks and branches that do not break easily against gusts of wind. On the contrary, the breeze only serves to develop its sturdiness.

It can also withstand unpredictable growing factors like changes in weather or temperature. For this reason, many growers cultivate the strain outdoors. Breeders, especially in the northern hemisphere, will need to invest in a temporary enclosing in case of early frost or extreme weather that can kill the plant.

Looking to buy seeds like Alien Abduction? Check out our marijuana seed bank.

Indoors, the naturally short plant does not need to be topped early. However, it will need to be pruned often. Its broad leaves can sometimes inhibit light and air circulation in the lower nodes which can result in moisture turning to mold or mildew. Installing a proper ventilation system will also provide better aeration.

The Sea of Green setup works best with Alien Abduction. It takes advantage of its compact structure to create more budding sites. Pairing it with a soilless medium like hydroponics, which delivers nutrients directly to its roots, hastens its flowering time while producing significantly higher yields.

Alien Abduction has an indoor flowering period of 8 to 10 weeks. Growers can expect it to produce between 10 to 11 ounces of dried buds per square meter. Under the expert care of a seasoned grower, it can yield much more

In the northern hemisphere, Alien Abduction flowers from second to the fourth week of October. Once ready for harvest, it yields at least 13 ounces of buds per plant.

What is the Alien Abduction strain yield?

How much THC does Alien Abduction have?

What are the origins of the Alien Abduction strain?

Alien Abduction was created from a mix between Alien Dawg and Alien OG.

Have you ever smoked or grown your own Alien Abduction? Please let me know what you think about this marijuana strain in the comments below.