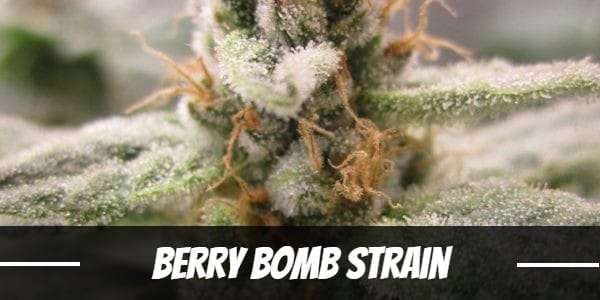 After taking a look at the Berry Bomb strain, it brought to mind nature.

On the surface and beneath the seas, a lot of plants and creatures have one thing in common.

They look gentle and beautiful but are, in fact, deadly. Such is the case with this cannabis hybrid hence its name.

It has the sweet smell and taste of berries which most people find attractive and appealing.

Still, it comes with a destructive force if one were not careful.

Of course, we are using hyperbole or exaggeration to describe its potency.

After all, that is one reason why the breeder named it as such.

Created by Bomb Seeds, they crossed their own Bomb No. 1 original with one of the most famous strains in the world – Blueberry.

We do not know much about Bomb No. 1, but Blueberry is very well-known in the cannabis circle.

Over the decades, there has been a lot of breeders who used it to create new hybrids.

It first gained prominence when it won the Best Indica category of the 2000 High Times Cannabis Cup.

One reason for its popularity among users and breeders is its incredible scent and taste.

Using it as one of the parents of new strains, they hoped to pass on these traits to the new hybrids.

As such, we can say that Berry Bomb is the same as Bomb No. 1 with better smell and flavor.

As soon as people smell it, the urge to use it becomes too much to resist. But be careful, too. Bomb Berry can be gentle and pleasant, but use it too much then it becomes overwhelming. Also, it does not act quickly. In other words, it may take more than ten minutes before it starts to work its way to the body. As such, never underestimate its potency.

Once it starts making its presence known, users are likely to feel a slight pressure around the eyes. Some people have also reported feeling a tingling sensation. It then induces a mental high that makes users feel uplifted and euphoric. At the same time, they also feel more sensitive with a clearer head and a heightened ability to focus.

Users, already feeling happy at this point, will soon feel the effects of Berry Bomb creeping down. As a result, a complete body relaxation soon blends in with the mental high.

As alluded to, Berry Bomb is a potent strain. As such, it’s heavy hitting Indica properties can make people feel lazy. In some cases, the relaxation is too much that it makes users reluctant to move at all.

If for some reason one was to overuse, then Berry Bomb can induce narcotic like effects. For instance, some people may see color variations. At the same time, they tend to fall asleep even before its effects wears off.

Berry Bomb inherits the scent of its parent, Blueberry. As a result, it is one of the best smelling cannabis hybrids. It emits a sweet and earthy smell with a hint of berry which becomes more pronounced once the bud is broken.

Most of its scent carries over making the strain a delight to the palate. Its thick smoke is smooth and has a blend of vanilla and citrus that lingers as an aftertaste.

Looking to buy seeds like Berry Bomb? Check out our marijuana seed bank.

Using cannabis strains can come with its set of adverse reactions. But experiencing dry mouth and eyes are common with all hybrids. Other than these, there are some more that also may occur with many others but are more pronounced with Berry Bomb.

One is feeling more anxious or paranoid. Because of this, we do not recommend this strain to people who are already dealing with anxiety.

The heavy hitting effects of Berry Bomb may also cause some people to feel dizzy or have a headache. In most cases, it is due to using a tad bit too much. So, a couple of things users can do is to drink lots of water and also to use only small amounts.

One of the best uses of Berry Bomb for the medical cannabis users is in dealing with stress and depression. Its ability to uplift the mood and make people feel happy and feel euphoric is responsible for that.

A couple of other things that the strain can do is to induce sleepiness and hunger. On one side, it is ideal for people who need help in getting quality sleep. But the flip side to that is they may also feel hungry. So, one thing users can do is to prepare some food first so that they do not have to stand up if they want to eat a little something.

Berry Bomb is not a difficult plant to grow. In fact, it also helps that it is tolerant and forgiving when it comes to small mistakes. It can grow well outdoor and indoor, but most growers to plant it inside their houses for privacy reasons.

Like most Indica plants, it does not grow too tall. Because it tends to grow outward, it makes it perfect for using Screen of Green training method. Growers also have a choice of using soil as a medium or hydroponics.

Space Bomb is an average yielding Sativa dominant strain that is one many awards due to it fragrant and uplifting nature. Read our full review!

If the conditions are right, such as cooler temperatures during darkness, it may induce the purple and blue hues.

Although it is possible to induce the flowering stage as early as six weeks, it is better to wait until eight weeks. Once it is ready for harvest, another reason why it is called a bomb becomes evident. Each square meter can produce 17 to 21 ounces of buds covered with red and orange hairs.

In an open space, this marijuana plant will grow up to 4-1/2 feet tall. It should be ready for flowering during the last days of September. During harvest, each plant can produce around 21 ounces or more.

What is the Berry Bomb strain yield?

How much THC does Berry Bomb have?

What are the origins of the Berry Bomb strain?

Berry Bomb was created from a mix between Blueberry and Bomb No. 1.

Have you ever smoked or grown your own Berry Bomb? Please let me know what you think about this marijuana strain in the comments below.