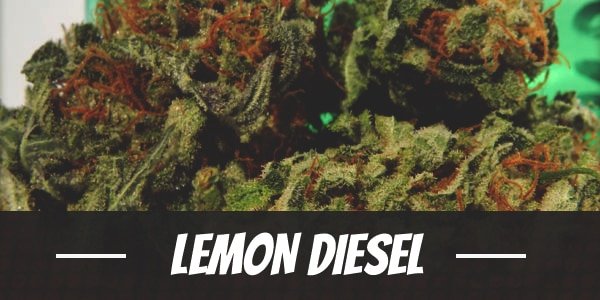 It takes around thirty minutes to feel the effects of Lemon Diesel. It does not act as fast as some others. Rather, it takes its time, and before you know it, it sneaks up on you. When it hits, it gives you a euphoric feeling, and a buzzing cerebral and body high. In other words, this strain promotes a positive sense of well-being. For this reason, Lemon Diesel is a popular choice among those who want to relieve stress.

This Indica-dominant strain is a Sativa hybrid of Lost Coast OG and Californias Sour bred by Green Lantern Seeds.

There is a confusion on the origin of Lemon Diesel mainly because of several other variants.

For example, Gage Green Genetics uses a clone-only strain of unknown origin in its other crosses, which they also named Lemon Diesel. Another breeder, Emerald Triangle Seeds use a mixture of Pakistani, Lemon Thai, Chemdawg and California Sour. Confused? Plus, there are a few other variants.

Because of the different variants and breeders, tracing the origin of Lemon Diesel and its lineage has remained a mystery. The consensus, however, is that the original Lemon Diesel was bred from Lost Coast OG and California Sour.

The best way to describe the effect of Lemon Diesel is how one feels. Although considered as fast-acting, it still takes up to half-an-hour for the effects to kick in. First, it begins with a feeling of cerebral euphoria that energizes the mind, then it boosts creativity and socialization. Starting from the head, Lemon Diesel creeps down to the body giving a relaxing, calm, and blissful buzz.

One of the benefits of Lemon Diesel is that once it kicks in, it helps in focusing one’s mind on the task at hand. This strain is excellent for people who lack concentration or energy. At the same time, the same focus could also be used on relaxing especially when its effect creeps on the body. Lemon Diesel also promotes a better appetite.

Lemon Diesel provides a dual mind and body experience making it an ideal choice for daytime use. After a hard day at work, the calming effect of this strain helps in relieving stress. For some, they may feel drowsy as it works its magic on the body.

Lemon Diesel has a sweet almost fruity smell of sour lemon, which others have likened to citrus and pepper. It does have an underlying hint of diesel, which is probably why a lot of people describes the fragrance as being like a lemon pledge. Depending on the variant, others may detect a hint of a skunk.

Although the hint of diesel can be smelled, it does not leave an aftertaste. Instead, Lemon Diesel leaves an intense flavor of sour lemon that lingers on the tongue. While the aroma of lemon does not dampen the smell of diesel completely, it does impact the taste.

There are possible adverse reactions to the use of Lemon Diesel. Among them are dry eyes and mouth. On rare occasions, depending on how it was used, it may cause anxiety, dizziness or paranoia.

Used in moderation, Lemon Diesel may help in relieving symptoms of pain including headaches and migraines. Although an adverse reaction includes anxiety (in rare instances), it does help in managing mood disorders including depression and PTSD.

Lemon Diesel plant grows tall with long and broad leaves that turn purple-gray as it matures. It is during the last couple of weeks of growth that the buds fill in the most. It can be grown both indoors and outdoors with a flowering period of 63 to 73 days and can be harvested in 9 to 12 weeks, around mid-October.

Growers will be glad to know that it is possible to grow Lemon Diesel using the Sea of Green (SOG) method. For the uninitiated, SOG method forces flowering much earlier, which in turn, allows for an earlier harvest. By adding a screen, it becomes what is called the Screen of Green (ScrOG) method, which is a great and energy-efficient way of growing indoors.

Lemon Diesel can be grown indoors with a flowering time of around 67 days. This may be faster by using SOG or ScrOG method of growing. A typical indoor yield would be around 16 to 21 ounces per square meter.

For those with an outdoor area to use, given the same time frame, the yield is higher with 21 to 24 ounces per plant.

Have you ever smoked or grown your own lemon Diesel? Please let me know what you think about this marijuana strain in the comments below.