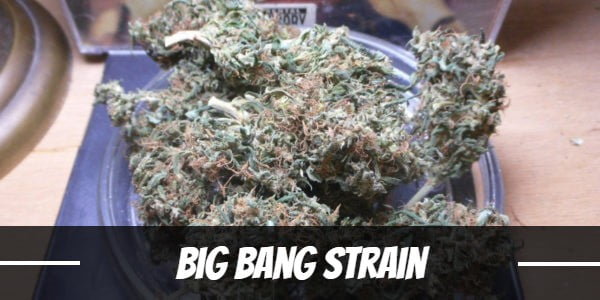 Did God create the universe or was it the Big Bang? Either way, one thing is for sure. Once people used the strain featured here, a whole new dimension opens up. As soon as its effects kick in, it brings users to an uplifting high. But if one were not careful, using too much may also lead to narcotic-like effects.

Most hybrids are two-way crosses, but in the case of Big Bang, it comes from three distinct strains.

Skunk No. 1 has made its mark in the industry. Already, many breeders have created countless hybrids using it. This strain, known for its skunky and sour scent delivers a high-energy buzz to its users.

Big Bang’s second parent does not need an introduction. Northern Lights, after all, is the most famous strain ever. Among its notable features are the hazy mental buzz it delivers and complete body relaxation.

Finally, the third parent is a past winner of Bio category of the 1998 High Times Cannabis Cup. El Nino is a feared phenomenon, but the strain itself offers many medical benefits due to its heavy Indica effects.

In some ways, the Big Bang may as well be the equivalent of Aromatherapy. On its onset, it delivers an intense euphoric high that uplifts the mood. On any given day, all signs of stress and worries evaporate as it works its way from the head down to the body.

As its strong sedative-like Indica traits make its presence felt, users feel a healing sensation washing over them. As a result, they feel not only happy but also relaxed.

At 20% THC, we know this is one potent strain. It may not be insanely high like a few other strains which almost reaches 30%, but the Big Bang is named as such for a reason. Use it a little bit too much, and it hits with a bang. In other words, users will likely feel its narcotic like effects overwhelming them if they are not careful.

At the same time, it is also the same trait that makes it beneficial to medical marijuana users. In another section, we will be taking a closer look at its benefits.

For a strain that seems notorious with an ominous sounding name, it has a scent that is gentle and soothing to smell. Big Bang emits a fruity scent that is reminiscent of apple and citrus. One way to describe how it smells is that it is such a delight.

As its scent carries over to its flavors, a distinct sweet blend of wood and chocolate is detectable. As such, it has a great lingering aftertaste.

As great and as wonderful its effects are for the users, the Big Bang strain is also not easy to handle. There are several reasons for picking the name Big Bang. One is its potency and narcotic-like effects. Another one is that many users may feel more anxious or paranoid under its influence. As such, people who are suffering from anxiety should never use this strain.

Another adverse reaction with the use of Big Bang is feeling dizzy. As such, the strain is best used in the evening, in the comforts of the home.

Finally, experience dry mouth and eyes are also to be expected, but these are within the bounds of normal reactions to the use of marijuana.

The uplifting mental buzz that induces intense euphoric feelings is also the reason why it can squash stress. As such, depression, and other mental disorders can benefit from its use.

Big Bang can also induce a severe case of the munchies. For that reason, it is a very good idea to have some food prepared and nearby. Otherwise, it is not easy to get up to eat. In fact, most people end up falling asleep. Of course, this is great news for people with insomnia.

If only the plant can come to exist from nothing like how matter came to be, but no, instead, we will have to cultivate it and give it tender loving care. But the result of such care is a massive yield. Finally, the third reason why it was named the Big Bang is due to its enormous output.

The Third Dimension is a mix of the earth and chemical with a note of citrus which is pleasant for most people. Read our full review!

The plant grows well outdoor, but most people would plant it indoor. Using hydroponics and combining it with both the Sea of Green and Screen of Green techniques works very well. It does not grow tall, as it tends to be bushy like most Indica strains. Come harvest time, growers will hold in their hands small and dense green buds.

Flowering time using hydroponics can be earlier, but it is best to start on the ninth week. Once it is time to harvest, growers can expect a bountiful yield per square meter of 28 ounces.

Because it grows outward rather than upward, the plant may need support, so that is something growers will have to be aware of. In an open space, each Big Bang plant can produce up to 36 ounces.

What is the Big Bang strain yield?

How much THC does Big Bang have?

What are the origins of the Big Bang strain?

Big Bang was created from a mix between Skunk No. 1, Northern Lights and El Niño.