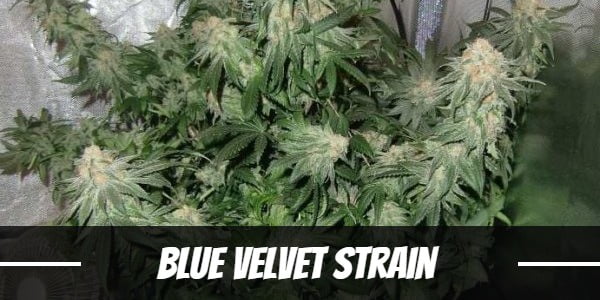 People use cannabis for a variety of reasons. For many, it is the uplifting effects it delivers, while for others, it is the complete body relaxation. Having seen hundreds of strains, we know that more than its recreational use, marijuana also have medical benefits.

In reality, its benefits to people with chronic illnesses are a result of the mental and body high it gives.

One of the unique hybrids is the Blue Velvet. This balanced strain does all those as mentioned earlier, but it is more known for the energy boost it delivers along with its more pronounced Sativa effects.

Blue Velvet was bred by DJ Short in the Bay Area decades ago. Somehow, it found its way to the Dutch scene and is more widely available today.

The strain is a result of a cross between the Sativa Purple Thai and the Indica Afghani. While it is a balanced split, its Sativa side is more evident and complemented well by its Indica side.

Blue Velvet is one of the fast acting strains. In other words, its effects hit moments after using. Having a THC content which could be as high as 22% means that smokers should not underestimate it. In fact, beginners are better off using a gentler cannabis.

After a few tokes, Blue Velvet begins with an uplifting sensation. As it continues to intensify, users now feel euphoric. There are strains out there that can induce a hazy mind, but this one does not do that. Instead, most people would have a clearer head. Furthermore, it also unleashes the creativity in the minds of its users.

Most people also feel a surge of energy that helps them complete their tasks. As the effects start to creep down to the body, most users remain clear headed. At the same time, there is also a heightened ability to focus.

Soon, though, the Indica side will start to overwhelm the body. At that point, most users would feel completely relaxed. If users indulge too much, it will likely lead to laziness. If this happens, then we can say that the mind is willing, but the body only wants to laze around.

One notable thing about the Blue Velvet is that it is also called Blueberry Thai by some people. We are not sure if this is another strain or the same one. At any rate, it makes sense because it does emit a strong blueberry scent accompanied by a spicy and earthy odor.

Much of how it smells carry over to its flavors. It is made more delightful by an exotic blend of lavender and coffee to go along with its sweet fruity blueberry taste.

Like all other cannabis strains, Blue Velvet has a couple of adverse reactions that is to be expected. Most people would experience with varying degree dry mouth and eyes. Using more means these symptoms will be more pronounced.

At the same time, some people may have a headache during the duration of the mental and body high. Also, in rare cases, there are also a few individuals who may feel a little bit paranoid or feel dizzy.

The boost in energy is beneficial when users want to use Blue Velvet as an aid in doing things. As such, it is advantageous if one wants a cannabis strain to help deal with fatigue.

Looking to buy seeds like Blue Velvet? Check out our marijuana seed bank.

But using Blue Velvet can also lead to a severe case of the munchies. On the one hand, this is helpful to people who need help in stimulating their appetite. But on the contrary, once the Indica side takes over, it will come to a battle of the will. Eat or stay still – that is for the users to decide.

Because of its ability to induce euphoria, it also follows that the Blue Velvet can be useful in behavioral problems. For instance, it is used by medical cannabis users to help them deal with depression.

Finally, the sedative-like traits of its Indica side are also useful in pain relief. As such, it is helpful to people who are dealing with muscle spasms, arthritis, and others.

From all indications, Blue Velvet is an easy strain to grow. It thrives well indoor and outdoor. Of course, most growers will have to cultivate this plant inside their house. Using hydroponics and combining it with the Sea of Green training method is recommended.

Outdoor, this plant can grow up to 9 feet tall, so that is something to consider. At any rate, Blue Velvet strain does not produce as many buds as many others and regardless where one grows it, it does not seem to make much difference.

Flowering time should begin in around eight weeks. By topping and training the plant early, it is possible to keep it below two feet. Once it is ready, the expected yield per square meters is around 10 ounces.

If growing marijuana is not a concern, it should be fun watching it grow up to 9 feet tall. But even so, each plant can only give around 10 ounces of buds. In the northern hemisphere, flowering time should fall between September and October.

What is the Blue Velvet strain yield?

How much THC does Blue Velvet have?

What are the origins of the Blue Velvet strain?

Blue Velvet was created from a mix between Purple Thai and Afghani.

Have you ever smoked or grown your own Blue Velvet? Please let me know what you think about this marijuana strain in the comments below.