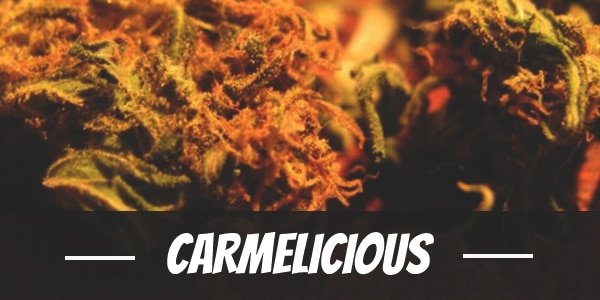 Sativa-dominant strains deliver mental effects that affect the behavior of people. For instance, people use these types of hybrids to uplift their moods and feel happy or euphoric. But these benefits are often not pronounced in Indica-dominant strains. An exemption to that is Carmelicious.

In estimates, it is around 65% to 80% Indica, but its cerebral effects are what makes it unique and desirable.

Many of the best strains in the world have at least one parent that can trace its genetic lineage to Afghanistan. In the case of Carmelicious, both its parents did originate from the Hindu Kush region near Pakistan. In particular, these are Maple Leaf and Afghan Kush.

Both are heavy Indica strains, which leads us to believe that there is a third hybrid involved. Some sources cite Blue Black (Dream Catcher Blue Black) as the third parent. Still, that is also a heavy Indica strain. As such, it is no wonder that Carmelicious is also Indica-dominant.

What did surprise us is that it’s rather small Sativa side can have a pronounced effect. Even so, if users use the strain too much, the body high can be overwhelming.

As alluded to, Carmelicious delivers great Sativa effects. It becomes more pronounced due to its potency. In some tests, it has a THC content reaching as high as 20%. Because it is also fast-acting, users may want to slow down especially when using it for the first time. At the same time, novice users must make sure they do not use too much.

At its onset, a sudden rush of uplifting sensation floods into the head of users. Immediately, they feel an overwhelming sense of happiness that some might describe as euphoric. At the same time, it does not cause a buzzing and hazy mind. Instead, most people feel clear headed and being able to focus better. Add to that the boost of energy that surges in and they feel like they can do tasks better.

Used in moderation or small amounts, the effects continue to creep down to the body. After a moment, they feel their muscles relaxing. As such, used in this way, Carmelicious is a great strain to use during the day.

But if it is used to or beyond limits, then the heavy hitting body high can overwhelm people. In this case, they start to feel lazy and possibly, remain on the couch for at least two hours, unless they fall asleep, which is a natural tendency for hard body hits.

As its name suggests, Carmelicious emits a delightful sweet candy odor that is a blend of caramel and vanilla. It is also accompanied by an earthy undertone.

As its scent carries over, it also has a mixture of creamy coffee and nuts thrown in as well as a honey sweet taste. In other words, Carmelicious not only has a pleasant smell, but it also has a delightful taste that most people will find agreeable.

Using cannabis comes with some adverse reactions such as experiencing dry throat and eyes. In both instances, they are mild. But if users go beyond the limits, then it becomes more pronounced. It may also bring on other concerns.

One is feeling dizzy. If it occurs, then it is almost always during the onset of the intense cerebral high. Also, possible occurrences are feeling paranoid or having a headache.

For recreational users, using cannabis is all about feeling good. Of course, the same is true for medical marijuana users. Among the top reasons for choosing Carmelicious is that it can put people to sleep. Use enough of it, and its users are bound to have a quality sleep. No doubt, this would benefit people with trouble finding sleep or insomniacs.

For most people using Carmelicious, they often succumb to its heavy Indica effects. One thing good is that it helps in pain relief for mild cases of pains and aches.

People living in regions where it is cooler or temperate may wish they live in a more tropical environment. It is because most marijuana strains available today thrives in a warm and sunny climate. But Carmelicious likes it both ways. In other words, it is more tolerant of lower temperatures compared to many others.

Besides growing it outdoors, it is also perfect for indoor using soil or hydroponics. It does not grow tall, and it tends to be bushier. Considered as easy to grow, Carmelicious is ideal for beginners in growing marijuana.

Even in small spaces, the plant grows up to 2-1/2 feet tall so most people should have no issues here. After eight weeks, it is ready to flower. Soon after, once it reaches maturity, each square meter will yield 16 ounces of buds.

Like typical Indica plants, it grows up to only 4-1/2 feet in an open space. Sometime during the end of September, it should or will soon enter the flowering stage. Upon maturity, each plant can produce around 20 ounces of buds.

Have you ever smoked or grown your own Carmelicious? Please let me know what you think about this marijuana strain in the comments below.