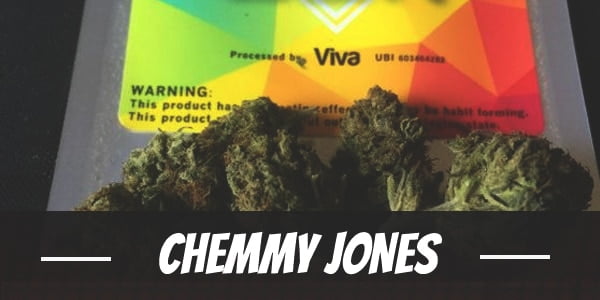 Chemdawg is a legend in the world of marijuana for its great flavors and uplifting cerebral high. And while the original is quite finicky plant in the grow room, its phenotype ‘Chemdawg D’ is sturdier. Not only that, it is much more vigorous compared to the former.

To enhance its taste, Connoisseur Genetics backcrossed Chemdawg D multiple times and then crossed it with the award-winning Sativa dominant strain Casey Jones. By doing so, they increased the offspring’s potency, deliciousness, and ability to deliver an intense high that unleashes one’s creativity.

Without a doubt, Chemmy Jones is one of the most delightful wake-and-bake treats in the cannabis industry. Its terpene profile is a complementary mix of sour diesel and freshly picked citric fruit. Drawn in, its psychoactive compounds induce a mentally stimulating high that helps start the day right. Moreover, its bodily effects keep users from feeling tired.

Fast-acting, energizing, and uplifting are three words that best describe Chemmy Jones’ onset. Almost immediately after the first two to three puffs, a rush of euphoria brightens the mood. And, as it swarms the mind, users are left livelier and happier. Some even radiate with a positivity that can only come from within.

In time, a light pressure trickles down from the temples. Mild at first, it gradually intensifies with each puff until each muscle is totally relaxed. It is not at all sedating though and neither does it lock users to their couches. So long as the strain is not used outside of one’s limits, of course. After all, it does exhibit potent levels of 15% to 20% THC.

The surge of energy, along with the lingering mental effects, allows one to stay productive throughout the day. Because of its wake-and-bake qualities, Chemmy Jones is best smoked in the morning or early in the afternoon. Using it at night will only keep users up.

Chemmy Jones’ exotic fragrance makes it immediately recognizable from other strains. It is marked by a pungent diesel with equally strong notes of wet soil. Enhancing both is the sweet scent of ripe pineapples and mangoes that intensifies once the bud is crushed, broken apart, or combusted.

Carrying over to Chemmy Jones’ flavor is Chemdawg D’s musky diesel blended with sour notes of fruits like mangoes and apples. Apart from the sweetness, the bud’s aftertaste is characterized by the taste of freshly picked berries and pineapples.

It is not uncommon for enthusiasts to feel a little dehydrated while using Chemmy Jones. After all, dryness in the eyes and a cottonmouth are the two most common effect of marijuana. Though unavoidable, both are barely noticeable due to their mildness. Still, beginners may down a few glasses of water in case the dry spell does not dissipate a few hours after the last hit.

Though rare, a potent strain like Chemmy Jones can green users out. Its symptoms usually include temporary dizziness and a keen awareness that sometimes trigger anxiety or, worse, paranoia. Though one’s disposition before the session is an important factor, so is individual tolerance. For this reason, marijuana must never be used outside of personal limits.

Stress relief is one of the major reasons why enthusiasts use marijuana and for good reason. Failing to dedicate time to destress can reduce the quality of life for many individuals. Moreover, it can lead to the early onset of serious mental and physical health conditions like depression, chronic anxiety, and hypertension.

In moderate levels, Chemmy Jones can address such issues. It induces a calming head high that removes the overwhelming dread of those constantly bombarded by stress. At the same time, the mood-stabilizing effect allows users to manage symptoms of depression and other mental illnesses like PTSD.

Equally soothing is Chemmy Jones’ body buzz. It appeases different types of pains and aches beginning from the between the eyes to the tip of the toes. The relaxing buzz relaxes any cramps in the stomach and, with its antiemetic properties, keeps nausea at bay. This makes the Sativa-dominant strain a helpful aid for cancer patients experiencing the physically demanding aftereffects of chemotherapy.

Chemmy Jones seeds are sold in both regular and feminized form. The latter is great for beginners as it shortens the growing process by eliminating the tedious process of applying multiple techniques to ensure an all-female batch. Meanwhile, the former appeals to breeders looking to enhance their expertise.

In spite of its Sativa-leaning genes, Chemmy Jones is quite sturdy. The plant performs outdoors, where it can withstand strong gusts of wind, fluctuations in temperature, and varying levels of moisture in the air. And though it prefers the warm, semi-humid weather of equatorial regions, it has no problem adjusting to the colder climate of countries in the north. It even blossoms relatively faster than other strains of the same category.

Still, there are many commercial growers who prefer cultivating their Chemmy Jones indoors where they can easily adjust factors like lighting, temperature, and humidity. Plus, it is added protection against pests. Its height, however, necessitate management techniques like early topping and bending to keep it from outgrowing its space. Applying methods like Low-Stress Training or the Screen of Green will help improve yields.

Chemmy Jones flowers faster compared to other Sativa-dominant strains. After 8 to 10 weeks, it yields between 12 to 16 ounces of buds per square meter but can produce even more under the expert care of a seasoned grower.

Chemmy Jones blooms within October, usually between the second to the last week of the month. Once ready for harvest, growers can expect anywhere at least 16 ounces worth of cured buds per square meter.

Have you ever smoked or grown your own Chemmy Jones? Please let me know what you think about this marijuana strain in the comments below.