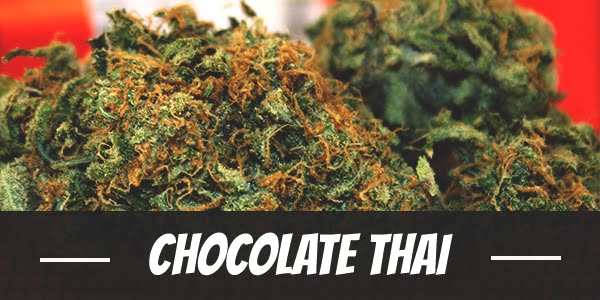 Chocolate is not healthy, then it is. No, it is not that good. So, when it comes to health, there are opposing views. One can pull up scientific studies, and it does not help matters. That is because even in research, there are contradictions. So, enough of that debate. Instead, focus on the Chocolate Thai.

The strain traces its lineage back to landrace Thai Sativa. It then made its way to the United States back in the 60s. It became famous when the distributors used hemp fibers to tie its flowers around the stem. Called Thai Sticks, it was a smashing success. However, it was also not an easy-to-grow plant. Not to mention, it does not have a high yield. As such, by the 80s, it seems to vanish into thin air.

Named after how it smells besides its origin, Chocolate Thai might have been lost forever were it not for DNA Genetics. Fortunately, they did have the seeds of the original phenotype which they grew in developing another hybrid. Then, they have some people keep the strain alive.

The uplifting high Chocolate Thai induces makes it excellent as a wake-and-bake strain. Think of it much like drinking espresso early in the morning soon after getting off the bed. As if on cue, this strain also has a coffee scent.

As the cerebral high intensifies, it makes users feel highly invigorated. As the head clears, the ability to focus becomes sharper. It inspires users to be active and productive.

Hardcore Sativa fans may not find Chocolate Thai that appealing, though. That is because its effects, while pronounced, is not as intense as others. Still, it is precisely because of its gentler nature that has made it appealing to casual users.

Gradually, as the mental high stabilizes, it leaves users feeling happy and at ease.

For obvious reasons, it is not hard to guess that the strain has a chocolatey scent. Besides its uplifting effects and uncanny ability to clear the head like caffeine, it actually has a coffee fragrance blending in with a spicy note.

Of course, the goodness of its fragrance is carried over to its taste. While some people do not find its fragrance remarkable, it does taste better. During the exhale, it also has a woody undertone accompanying its chocolatey-coffee flavors.

Just like other strains, Chocolate Thai comes with unwanted reactions. The most common ones are dryness of mouth and eyes. Because of that, it is best to keep hydrated before and during its use.

If one has a low tolerance level or is prone to overconsumption, other side effects will most likely occur. There are cases wherein the Sativa effects are overwhelming and cause users to feel anxious or paranoid. Other may also experience dizziness.

It does not matter if a marijuana strain was bred for recreational purposes or otherwise. So as long as it has THC and/or CBD, it has value to medical users.

Because of the way it enhances the mood, then it follows that it can wipe out stress. As it promotes a sense of well-being, it helps people with depression manage their condition.

Other people are also reporting that Chocolate Thai can help alleviate pain. Although it does not possess a sedative-like Indica body high, it does take the mind away from any mild aches one might be feeling.

For hours after taking tokes, Chocolate Thai keeps users highly energetic and motivated. As such, it can be an effective aid in battling the symptoms of fatigue.

One does not have to set out on a journey to uncover reasons why it is not a good idea to cultivate Chocolate Thai. That is because finding its seeds is rare. In the marketplaces today, it may be available with some online vendors. The chances are high that it is a cousin of the original strain at best.

Besides availability, it can be a finicky plant. It has an extended flowering period, and after taking care of it for a long time, its yield is very low.

At any rate, if one could get ahold of its seeds, then they do have to option of planting it inside the house or in the backyard.

Chocolate Thai has a flowering period of 14 weeks. Even with such a long duration, its yield is not likely to reach 12 ounces.

Outdoors, Chocolate Thai thrives well in a warm and dry setting. Harvest is ready by the end of October with yields of up to 12 ounces per plant.

Have you ever smoked or grown your own Chocolate Thai? Please let me know what you think about this marijuana strain in the comments below.