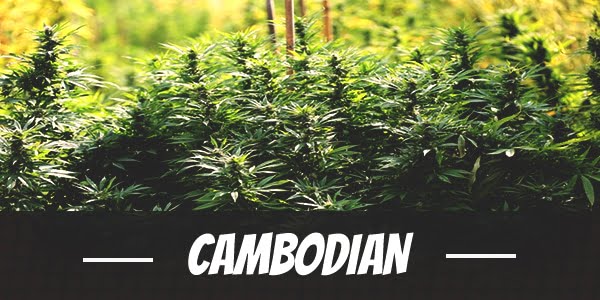 Cambodia, also known as the “Kingdom of Cambodia,” is a country located in Southeast Asia. It is famous for its historic temples and quiet beaches that has been a tourist favorite for such a long time. Due to that, it has been on traveler’s bucket list of Asian destinations. Besides the sights and culture, it is also home to one of the most potent Sativa strains in the world.

Cambodian strains mostly grow in the southwestern region. Taken care of by the locals, these are mostly Sativa. However, crossbreeding also took roots and as such, there are now 50/50 Indica and Sativa hybrids.

The psychoactive elements found in their strains are quite impressive too. Most of the ones people get ahold of recently ranges from 15% to 26% THC. However, there are reports that some could have as much as 30%. When it comes to potency, these strains are among the most powerful.

Unfortunately, the availability of this strain for regular consumption is quite hard to find. Because seeds are not likely to be available, about the only way one could cultivate the plant is by cloning.

The Cambodian strain are mostly Sativa. As such, its effects are primarily mental and behavioral. However, that is not to say that it does not have physical manifestations as well.

Its psychoactive properties do not take effect quickly. But do not get fooled by it. An intense cerebral buzz kicks in around 15 minutes after the first few tokes leaving users on a euphoric high. It induces happy endorphins and uplifts the mood. As a result, people under the influence of Cambodian tend to be talkative and trippy. Perhaps this is also because of the energy boost this strain provides.

Aside from putting it to good use when hanging out with friends during a party or even just a lazy weekend afternoon, this strain is also a big help to those who are in need of some productivity. Depending on how the user takes it, some feel a sharper focus and a boost in creativity.

These effects are then accompanied by deep relaxation as it subsides. The good thing is, it does not have sedating traits. Still, use more than enough and it could lead to a couch-lock.

Cambodian emits an aroma that is somehow a reminder of how beautiful nature is. Imagine walking in a garden early in the morning. A fresh earthy fragrance of flowers passes through the nose and awakens the senses. That is what it smells like. A faint skunky hint is also detectable once the buds break.

Flavor-wise, it produces a refreshing taste that is similar to its aroma. A various mix of earthy flavors burst in the mouth as soon as one takes a toke. A combination of herbal and tropical taste makes one seek for more. Upon the exhale, it leaves a skunky aftertaste with a floral note.

Typical of marijuana, its use can cause dry mouth and eyes. However, in many instances, people who are new to this strain are likely to take a toke or two more than enough. As such, it may also cause other adverse effects such as having a mild headache. Overindulging, most likely, is because it is slow-acting fooling people into thinking it is not at all potent.

There are also reports that a few people may feel anxious or paranoid. So, those who have anxiety issues will want to be sure to use only a tiny amount.

Other than something that could be used for enjoyment, marijuana is also famous for its medical benefits. After all, this is really the reason why it is allowed for use in most places. THC and CBD are compounds found in strains that are said to be very beneficial in providing comfort to ailments. While the CBD content of Cambodian is not disclosed, it does have a high THC content. With that, the intense psychoactive effects can help with certain conditions.

Cambodian could easily relieve psychological disorders. The intense cerebral euphoria that it delivers induces happiness. In making people upbeat, it wipes out stress. As such, it has benefits to people with depression as well as other conditions including PTSD, ADHD, and ADD.

Because of the energy boost, it helps people ward off fatigue. At the same time, it may also provide some relief from chronic pains and aches.

Information on how to grow Cambodian is a little scarce. It is not even available for sale online. But that is not to say it is impossible to cultivate. One only has to know someone who has a mature plant and try to obtain a clipping and clone it.

At any rate, the plant thrives in a Mediterranean climate. It is also sturdy and resistant to changes in temperature. Other than that, some of the things growers need to do are to regularly trim its leaves.

Cambodian has an indoor flowering period of 9 to 10 weeks. During harvest, yields are expected to reach 10 to 12 ounces per square meter.

Cambodian thrives well on semi-humid and Meditteranean-like climates. Harvest is ready sometime in October with yields up to 10 to 12 ounces per plant.

Have you ever smoked or grown your own Cambodian? Please let me know what you think about this marijuana strain in the comments below.