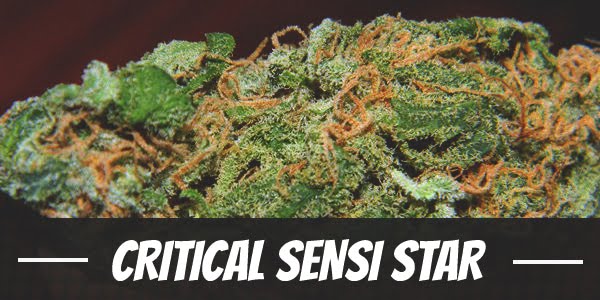 Cannabis is a booming industry. With that, it is not only that breeders keep developing new hybrids – there are also more of them nowadays. As such, the number of strains today is likely in the tens of thousands. Not all of them lasts in the marketplace though. Granted that some may be due to difficulty in producing seeds, most which have endured are the exceptional ones such as Critical Sensi Star.

This hybrid is an offspring of the Sensi Star. Considered to be among the legends, it unique brand of sedating body high has helped countless people find comfort. It has also won numerous major awards in prestigious cannabis competitions around the world.

In developing Critical Sensi Star, Delicious Seeds chose to use Critical Mass. Aptly named due to its vigorous production, its most notable trait is the weight of its buds. Being one of the heaviest, it can snap branches unless supported. Furthermore, it is also known for inspiring creativity and full body relaxation.

Both Sensi Star and Critical Mass are Indica-dominant hybrids. Hence, much of its effects are centered on the physical much more so than the mental.

Critical Sensi Star is an excellent companion for late afternoon or evening relaxation. Even though it leans towards Indica, it retains enough of its Sativa heritage to deliver a stimulating mental high. Often, this is enough to take away any inhibitions and bring users into an upbeat mood.

After some time, a tingling sensation spreads over the body and soothes the muscles. As it intensifies, it leaves users feeling remarkably relaxed and on a spacey high.

Overall, Critical Sensi Star is a strain that promotes wellbeing and positivity. But, because of its potency, users must take into consideration the amount of ganja smoked. With its high THC content of 15% to 20%, it can be overwhelming and could easily knock out users. Not that it is a bad thing, though. In fact, it is one of its best medical use – to help people sleep.

Critical Sensi Star has an earthy zesty aroma reminiscent of Nepali incense. Often described as being citrus scented, it can sometimes smell like sweet lemon. However, typical of citric fragrances, this bud can be quite sour too.

Sensi Skunk is a hybrid creation by Sensi Seeds, which was created out of the genetics of legend parent strain Skunk #1. Read our full review.

Upon inhale, Critical Sensi Star explodes into a myriad of different flavors. True to its scent, the strain has quite the citrus taste of lemon and grapefruit combined complemented by the sweet taste of honey and a hint of skunk. When exhaled, it leaves the mouth with a tangy aftertaste.

With Critical Sensi Star, users often experience dry mouth and eyes. However, because these reactions are quite mild, most people just brush it off. At times, this bud may cause a small degree of dizziness or paranoia. But, this is only possible when users end up smoking too much.

Critical Sensi Star is effective at uplifting the mood. Because of this, many people use it to de-stress. It can also provide comfort to those suffering from depression by promoting a sense of happiness.

Besides the changes in behavior, this strain is also known to have physical medical benefits. For example, Critical Sensi Star has analgesic properties. As such, it can quickly relieve chronic body pains and muscle aches.

Besides the benefits mentioned, perhaps the best use of Critical Sensi Star for most people is to find quality sleep. A heavy-hitting Indica, this strain is very potent and can induce drowsiness. Often, it leaves people sleeping and waking up the next day feeling reinvigorated.

Critical Sensi Star is not a difficult grow. Being a sturdy plant, it is not as demanding of attention and care as some others. Thus, not only is it popular with experience growers but also beginners. Its appeal mostly is due to its effects. More than that, it is also because of its incredible yield. Like its parent strains, Critical Sensi produces a lot of resin. In fact, it does look swollen due to its resin-filled calyx.

While cultivating Critical Sensi Star in a Screen of Green environment, growers should strive to keep track of the plant’s growth. To keep it short, top it early. After flowering for a period of 7 to 8 weeks, it can produce up to 17 ounces per square meter.

Critical Sensi Star usually flowers by the second or third week of September, which is a little earlier than most Indica dominant plants. At harvest, growers can expect a yield of 17 to 28 ounces per plant.

Have you ever smoked or grown your own Critical Sensi Star? Please let me know what you think about this marijuana strain in the comments below.