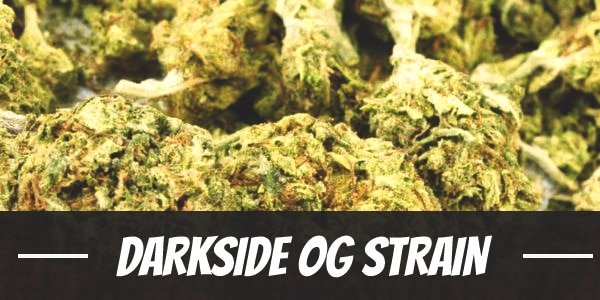 It would do well for people to stay away from dark side. It is filled with pain, sorrow, and regret. However, the story could be different with Darkside OG. The Indica-leaning strain induces a relaxed high that instills a sense of peace and calm among users, even temporarily pushing back dread and worry.

If any, the only area one should worry about is its potency. It is a powerful strain that boasts between 29% to 31% THC. No doubt, using it beyond could lead to an overwhelming buzz that not only make one dizzy but also glued to the couch.

In moderation, however, it produces a heavy-hitting high that starts with a gentle mood lift. Its effects usually intensify over time. Although commonly used for recreation, Darkside OG is also the perfect companion for patients. It has significant therapeutic effects that provide comfort against various issues.

Darkside OG has an uplifting head high that usually presents itself 15 minutes after the initial puff. However, once it starts, a rush of euphoria quickly swarms and clears the mind. It creates space for pleasant thoughts, thus leaving users feeling happy.

After an hour or two, a light pressure around the temples begins to build. It first irons out creases in the forehead before ebbing down to the lower extremities. Like a wave of relaxation, it breaks apart knots in the muscles that cause tightness. In its place, there is a soothing sensation that grows heavier by the minute. Finding a comfortable spot would be essential to enjoying the strain as users will most likely fall asleep.

With that said, it is possible to use Darkside OG in the morning so long as it is taken in moderation. The best time to use it, however, is after a stressful week or day. Its heavy-handed comedown comes in useful for a night of relaxation and deep sleep.

Darkside OG has a tantalizing aroma made up of citric fruits like lemons, oranges, and lime. Enhancing it is a fragrant earth and refreshing pine with floral tinges upon combustion.

Tantalizing the palate are Darkside OG’s citrus overtones of overripe lemons and freshly squeezed oranges topped by a hit of lime. It could be quite harsh for some but is overall a delicacy to most users, especially when bringing out its floral undertones. Its aftertaste, on the other hand, is an unearthed pine.

Users can expect Darkside OG to dry the eyes and the mouth as well as induce a subtle dizziness. The offshoots are inevitable but mild and manageable. Staying hydrated by drinking water or electrolyte drinks will help maintain a degree of moisture, although it will come back after a few hours.

Darkside OG’s potency provides patients with a reprieve against a myriad of mental and physical health issues. Its uplifting high, for instance, temporarily distracts patients from the forlorn thoughts that come with suffering from an affliction. It has a stress-crushing high that does well against the overwhelming dread, worry, and anxiety.

Simultaneously, it enhances the mood and stabilizes turbulent emotions. it makes for an excellent anti-depressant, anxiolytic, and anti-psychotic. Long-sufferers of psychological distress will find comfort in it as it continues to brighten one’s disposition.

Its potent analgesic properties must also be recognized as well. It is a powerful painkiller that relieves aches and pains. It is particularly effective when it comes to managing symptoms of arthritis, joint pains, and head or body aches. Meanwhile, its muscle-relaxing abilities prevent further contraction that could lead to spasms. Under the guidance of a health professional, it could even be used to reduce seizures.

The deep relaxation usually ends in slumber. People with insomnia will find that Darkside OG is an impressive alternative to certain melatonin aids. Not only does the strain improve the quality of sleep, but also quantity.

Darkside OG has visible Indica traits. It is short, bushy, and sturdy. Its stalks are thick while its branches are hardy enough to withstand the weight of its heavy buds. Thus, it makes for a great introductory plant that even beginners could cultivate.

Usually, growers rarely encounter problems while cultivating Darkside OG. It has excellent immunity against common pests and diseases that may ravage the plant. Of course, one should still exert effort into creating the perfect environment which includes providing it with ample air and good light. The strain will also benefit from nutrient boosters outside of the typical feeding and nutrition, although it is not a necessity.

The Sea of Green brings out the best in Darkside OG. It fits perfectly with its short height and the setup also helps maximize small spaces. This particular method gently coaxes the buds toward the light, shortening the vegetative phase without affecting yields.

Darkside OG has a short flowering period of 7 to 9 weeks. Each square meter is expected to produce 10 to 12 ounces of buds but it is possible for the plant to yield higher under the right conditions.

Flowers bloom around the last few days of September to the second or third week of October. It is possible for growers to harvest around 12 ounces of buds per plant.

What is the Darkside OG strain yield?

How much THC does Darkside OG have?

What are the origins of the Darkside OG strain?

Have you ever smoked or grown your own Darkside OG? Please let me know what you think about this marijuana strain in the comments below.