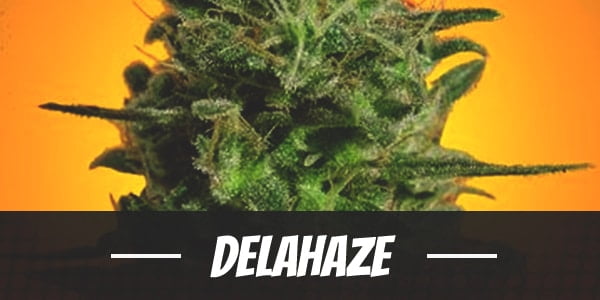 Haze is a Sativa family that can be traced as far back as the 60s. Any variety associated with it immediately assures users of a potent cerebral buzz with absolutely energizing effects. For this reason, many gush at the mention of DelaHaze – a strain that does its ancestors proud by staying true to its lineage.

Nothing short is expected of Paradise Seeds, of course. After all, they are among the most awarded seedbanks in history. The same holds true for DelaHaze. In creating it, the breeders used Mango Haze for its classic Sativa effects and fruity flavors. It was later paired with the potent Lemon Skunk.

Resulting from their marriage is a Sativa-leaning hybrid worthy of their reputations. DelaHaze flowers fast, delivers a long-lasting cerebral buzz, and is highly potent. Not to mention, it is absolutely delicious. Over the years, it has won prestigious awards including 1st prize for best Sativa at the 2008 High Times Cannabis Cup Amsterdam.

Though generally classified as a Sativa dominant strain, DelaHaze is a creeper in that it is a slow starter. Rather than overwhelming users with a quick-setting onset, it intensifies throughout the day and may even be barely noticeable. Those deliberately taking note of its effects, however, generally agree that it begins with a gentle rush of euphoria.

Initially, an uplifting buzz invigorates the mind. It promotes an innate sense of happiness and wellbeing that leaves users beaming with positivity. The clearheaded high also comes with a subtle mental stimulation. For enthusiasts with work ahead of them, the free flow of thoughts is a gateway to creative thinking and innovative ideas.

Surging throughout the muscles is a jolt of energy that reinvigorates the user through and through. It promotes activity and deep physical relaxation that allows the body to move freely like a well-oiled machine.

At up to 21%, DelaHaze can be quite debilitating for most inexperienced users. However, its buildable high makes it an ideal smoke for beginners looking to build their THC tolerance. Although, it would be best to have a seasoned friend pace one’s consumption.

DelaHaze is the perfect herb for users with a knack for sweet smelling strains. Its buds smell like sweet mangoes with a subtle citric kick. When combusted, the smoke gives off the refreshing scent of woody pine.

On the palate, DelaHaze bursts with a citric goodness of zesty lemons and sweet mangoes. Blending with it are notes of wet soil and refreshing pine that, on the exhale, leave a familiar taste of wood.

Regardless of the strain, marijuana use always leads to dehydration. It is most notable in areas like the eyes. But, with cannabinoids interfering with the production of saliva, a cottonmouth is likely too. Both are mild and barely noticeable. While a large number of enthusiasts are used to the mild effects, some beginners may find the dry spell a little uncomfortable. In such cases, it is best to down a few glasses of water.

Being such a potent Sativa dominant strain, it is possible to feel a little anxious while smoking Delahaze. Some may even temporarily experience dizziness and paranoia. Such effects often come about as a result of using too much of the strain. As such, pacing and moderation are a must.

It is highly plausible that DelaHaze was created to cater to the recreational community. After all, that has been the perception of marijuana since time immemorial. Still, the strain’s therapeutic value is not for naught. Through the combined efforts of its psychoactive compounds, it eases away the debilitating effects of many mental and physical conditions.

As a predominantly Sativa strain, one of DelaHaze’s best use is appeasing symptoms of depression and PTSD. It delivers a euphoric yet calming high that positively affects outlooks and depletes anxiety. By reducing levels of stress, the bud also effectively slows down the early onset of other mental health issues.

Stress can also manifest in the body in the form of physical fatigue. But, through DelaHaze’s analgesic properties, it relieves pain and releases tension all throughout the muscles.

The same effect is evident in the gastrointestinal tract. By soothing the tightness in the stomach, DelaHaze stimulates the appetite while allowing food to pass through smoothly. As such, one of the best times to use the bud is two or four hours before a meal as it encourages a hearty craving for all things delectable.

There are two major factors to consider while growing DelaHaze – climate and location. While the plant grows well in fluctuating weather of the northern hemisphere, it prefers climates that have long summers, intense sunlight, and little hour variation with regard to days and nights. In such conditions, it thrives best and flowers fast. This is not to say the plant will fail in regions with differing seasons. Rather, it may blossom later than other strains.

Unlike other Sativa-leaning strains, DelaHaze is not at all weak. Its stems are thick and can resist various diseases such as root rot, mold, and mildew. Even so, it should be sheltered from blazing and freezing conditions that might kill it. It can also withstand strong gusts of wind due to its lateral branches. In spite of its branchy structure, the plant retains a great calyx to leaf ratio that makes cutting away unwanted leaves easy.

DelaHaze’s height necessitates early topping though especially when cultivated indoors. Otherwise, it will easily outgrow its growing space once it stretches during the flowering phase. Those with truly limited areas may want to shorten the vegetative period to keep the plant short. This will also ensure even canopy that will provide the batch with even light and air circulation as it flourishes.

Once mature, aspiring growers may opt to leave the DelaHaze flowering for a week more. This will encourage even better yields although it may sacrifice the bud’s delicious flavors. Although, the clusters of frosted nugs, side colas, and a full batch of resin-filled calyxes are enough to compensate.

DelaHaze has an indoor flowering period of 9 to 10 weeks with each square meter producing at least 18 ounces of buds. Applying the Screen of Green method, however, will encourage even better yields.

In the northern hemisphere, DelaHaze blossoms between the last week of October to the first week of November. Meanwhile, those in the Southern part of the world will see flowers around the first half of May. Regardless, the herb yields up to 35 ounces of buds per plant.

Have you ever smoked or grown your own DelaHaze? Please let me know what you think about this marijuana strain in the comments below.