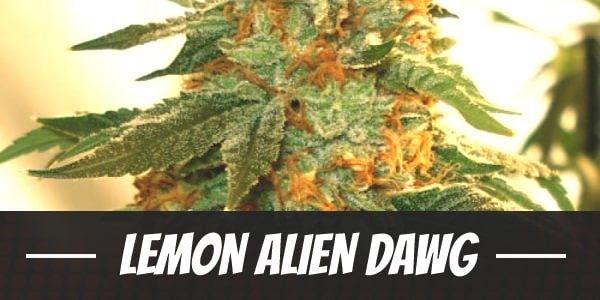 There are only a handful of strains that compare to Lemon Alien Dawg. By many standards, it is a powerhouse with the capacity to deliver a debilitating high when used outside of one’s limits. In moderation, however, its delicious smoke induces a pleasant buzz that perfectly melds together mental and physical effects. Truly, a remarkable Indica-leaning hybrid.

Nothing short is expected from its creators Alien Genetics. After all, the company is comprised of dedicated breeders with a penchant for bringing together unique buds. Their Lemon Alien Dawg, for instance, is a cross between a female Alien Dawg and a Lemon Kush male.

An Alien Genetics’ bestseller, Lemon Kush captured the hearts of enthusiasts with its zesty smoke and blend of landrace strains. Meanwhile, Alien Dawg is a potent Indica-leaning hybrid that, in spite of its fame, remains quite a mystery for the most part.

Lemon Alien Dawg’s effects are nothing short of impressive. During the initial onset, it delivers a euphoric characterized by an innate sense of happiness that usually leaves many in a better mood. Pairing well with the upbeat disposition is a clearheaded high that allows thoughts to flow and form freely, inspiring creativity.

Once the body buzz starts, it is not uncommon to see users take to the nearest seat. Subtle at first, the warm, fuzzy feeling becomes more powerful with each toke that it begins to envelop the body in relaxation. In all likelihood, Lemon Alien Dawg will anchor enthusiasts where ever they are sitting until they eventually drift off to dreamland.

While it is possible to use Lemon Alien Dawg for a light brainstorming session in the afternoon, it is best used at night. Otherwise, its sedating effects will hit users at the most unlikely of times and have them dozing off mid-day.

Lemon Alien Dawg has the zest of citric fruits like lemons. Blending with it is a subtle sweetness and undertones of wet soil that make the bud seem freshly picked.

Carrying over to Lemon Alien Dawg’s flavors is its citric scent. Drawn in, it bursts in the palate with the refreshing taste of tropical fruit. Enhancing it is the sweet taste of homemade lemonade. On the exhale, it leaves an earthy aftertaste.

Using marijuana always leads to loss of moisture in the eyes. To some degree, it can also leave users with a cottonmouth since cannabinoids interfere with the production of saliva too. Neither are a cause for concern though but users may keep themselves hydrated before, during, and after a session to mitigate the dry spell.

Used in unreasonable amounts, Lemon Alien Dawg can induce a phenomenon called ‘greening out.’ It is characterized by dizziness, headaches, and anxiousness, especially in users with low tolerance to THC or those prone to anxiety. Pacing and moderation, however, will keep such effects at bay.

Through the combined efforts of its chemical compounds, Lemon Alien Dawg provides a reprieve against a plethora of mental and physical conditions. For example, in inducing a happy high, the slightly Indica bud releases stress. In doing so, it slows down the early onset of certain mental illnesses like depression and anxiety. Not only that, it positively impacts negative outlooks while encouraging confidence.

On the physical aspect, Lemon Alien Dawg relieves various aches and pains in the body beginning from the temples. In the gastrointestinal tract, the soothing sensation calms turbulence in the stomach. Meanwhile, its antiemetic properties keep users from experiencing nausea. This trait is especially helpful for cancer patients experiencing the harsh side effects of chemotherapy such as vomiting or being unable to eat.

Sleep is an integral part of any recovery process. It accelerates the regeneration of cells and balances out hormones to hasten healing. To this end, Lemon Alien Dawg is a perfect choice. A natural sleep aid, it relaxes users until they eventually fall into a deep, unencumbered slumber.

Lemon Alien Dawg is taller than most Indica leaning strains like it. While its height is relatively manageable, it responds well to methods like early topping, bending, and super cropping. This turns the plant into a bush with multiple ‘tops’ each with their own upsized colas. Although, growers with truly limited areas may want to shorten the vegetative period to keep it from a massive growth spurt.

Due to its hardiness, Lemon Alien Dawg can be grown outdoors without worries. Its branches do not break off at sudden bursts of wind while its stems are thick and sturdy enough to withstand problems brought about by the weather. Still, many growers prefer cultivating their batch inside indoors to escape the threat of pests.

Artificial environments also allow breeders to adjust various factors like lighting, humidity, and temperature to bring out the plant’s full potential. Pruning is necessary though as the plant tends to get bushy. Apart from enhancing air circulation, trimming also assures healthy budding sites with ample nutrients.

At the moment, Alien Genetics has only made the feminized seeds of Lemon Alien Dawg available. While this may pose a bit of a challenge to beginners, it poses as a perfect opportunity for experienced breeders looking to cross some of their females with the strain. Those looking to grow more females may want to plant more seeds and apply pre-germination techniques like soaking. Low-Stress Training, on the other hand, will keep calyx-filled females from turning into hermaphrodites.

Indoors, it takes Lemon Alien Dawg around 8 to 9 weeks to finish flowering. Once mature, growers typically harvest around 10 to 12 ounces of buds per square meter.

Lemon Alien Dawg blossoms around the second to third week of October. It yields at least 12 ounces of buds per plant.

Have you ever smoked or grown your own Lemon Alien Dawg? Please let me know what you think about this marijuana strain in the comments below.