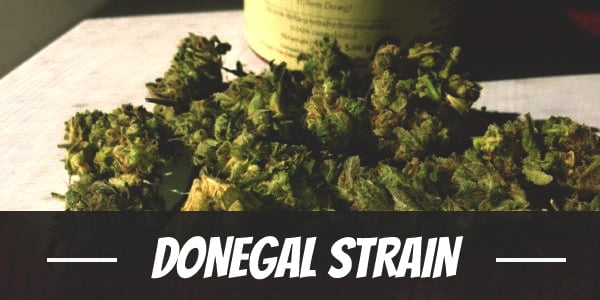 Chemdawg is a strain that has made a name for itself in the world of marijuana. If not for it, hybrids like Sour Diesel and GG4 would not exist. Often, it is used as a genetic base to create other plants. However, it can also produce a totally unique variant on its own.

These phenotypes are totally one-of-a-kind, from appearance, fragrance, and flavor. It may even differ in structure and potency. Chemdawg’s variant, Donegal, is a prime example of this.

In creating this strain, Tweed wanted a Sativa leaning version of the original Chemdawg that was also more potent. To this end, they succeeded since Donegal’s THC levels average between 18% and 19%, far higher than its parent.

Donegal also has well-balanced effects that are likely influenced by its own Sativa structure and the Indica genes of Chemdawg. This means it brings users high on the clouds then, later on, settle them in utter relaxation.

Donegal has a quick onset. In only a few puffs, it sends a rush of energy to the mind to eradicate all kinds of negativity. In doing so, it reinvigorates the mind and enhances the mood. Soon, users become social butterflies as a result of lowered inhibitions. This makes the Sativa dominant hybrid a great party strain. However, the same psychoactive compounds can also motivate users to finish tasks set about for the day.

As the high progresses, a mellow body high ensues. This is the Indica influence of the plant creeping in. Originating from the temples, a warm sensation washes over the body and brings a sense of upliftment and relaxation to the user. In soothing the muscles, it entices tired souls to rest.

In moderation, Donegal induces an intense but pleasurable high. Often, it leaves users in a calm introspection. But, its potency can also be overwhelming. Accidentally overindulging can possibly result in an extreme psychedelic, in which users are completely couch locked and stuck with rapid thoughts.

Like Chemdawg, Donegal’s fragrance is very complex. At times, it can be extremely pungent with hints of skunk. In other occasions, it oozes the homely aroma of damp earth and wood. But, for the most part, it emits a citrus diesel scent. Once grinded, it releases a uniform spiciness into the air.

Donegal has the earthy flavor of freshly picked citrus. Drawing in the smoke, there is a savory wood that takes over the palate. Compared to its complex fragrance and taste, its smoke is simply smooth. Although, beginners may experience a small bout of coughing.

With regard to marijuana use, the two most common reactions are redness in the eyes and dryness in the mouth. This is due to the smoke taking away moisture in these areas. However, both effects are usually mild and are not a cause for worry.

Of course, not all strains are dehydrating. Donegal, for example, rarely causes a cottonmouth because of its citric flavors. As a Sativa, however, it can cause users to feel slightly anxious. Although, this only ever happens to users abusing the hybrid. As such, it is best to avoid overindulging its buds. Pacing the smoke can also be of great help, especially for beginners.

Like other recreational strains, Donegal has low CBD levels. However, what makes this strain invaluable to the medical community is its psychoactive compounds.

Like a strain that keeps on giving, Donegal can be a source of comfort for those with depression or PTSD. By enhancing their moods, the strain is able to alter perceptions positively. Not only that, the energizing buzz effectively wipes out stress.

Besides the behavioral changes, Donegal also has physiological benefits. As a relaxant, it soothes the muscles and aids in relieving fatigue. The same psychoactive compound also makes users drowsy. While it may not be the perfect sleeping aid, it still gets the job done.

Donegal tends to be susceptible to mold and mildew. As such, temperatures and especially humidity levels should always be kept in check. Otherwise, the two can potentially damage the plant.

Aside from that, the hybrid needs to be topped early since it tends to grow tall. Doing so will promote stronger lateral branches.

Donegal usually flowers within 7 to 9 weeks and yields at least 28 ounces of buds per square meter. Although, indoor growers may want to invest in odor control measures to keep nosy neighbors away. Especially because it releases a very pungent scent once mature.

Outdoors, Donegal has little protection against mold and mildew. As such, backyard cultivators should ensure to plant the viable seed in sunny climates. By October, the seed will mature into a full grown plant that yields more than 28 ounces of sugar-coated buds per plant.

What is the Donegal strain yield?

How much THC does Donegal have?

What are the origins of the Donegal strain?

Donegal was created from Chemdawg.

Have you ever smoked or grown your own Donegal? Please let me know what you think about this marijuana strain in the comments below.