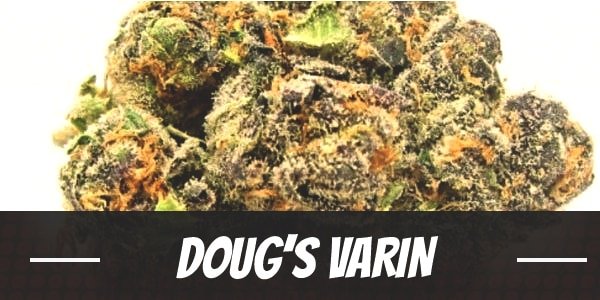 Mistaking Doug’s Varin for a fictional character is easy. After all, its name does sound like it came straight out of a video game. In reality, though, it is an elusive strain and finding it in dispensaries is an adventure in itself. And if one were to get ahold of it, then be prepared for the energizing high it induces.

A big part of the reason why Doug’s Varin provides energy is due to the high amount of Tetrahydrocannabivarin (THCV) it contains. To better understand, the THCV found in other hybrids comprises less than 2% of all the psychoactive compounds. Doug’s Varin, on the other hand, has an unheard of 5:4 THC to THCV ratio.

For users, it potentially has one benefit that puts it a cut above the tens of thousands of hybrids ever developed – an appetite suppressor. Most people regard marijuana as an appetite booster, and that is technically accurate. But not for this one as this unique trait makes it a potential aid for weight loss.

Deemed as one of only a handful of hybrids with high THCV and arguably the highest in the world, sometimes people forget that Doug’s Varin is also a potent Sativa. In fact, tested to have as much as 24%, its psychedelic effects can quickly overwhelm those who underestimate it.

It is a fast-acting hybrid that sends an energizing cerebral stimulation. Used in moderation, it helps users by not only promoting mental clarity but also amplifying the senses. In turn, this leads to having the ability to locked in on tasks. And, that makes it the perfect wake-and-bake strain.

Doug’s Varin is also an excellent mood-enhancer. As the psychedelic high builds up, a keen sense of happiness sets in and soon soars to euphoric heights. Freed of psychological or emotional burden, it can also cause some people to feel highly aroused.

While the hybrid can keep users on the go, it can also be debilitating. For instance, overindulgence may cause the mental buzz to be too intense. It may result in visual distortions. Such narcotic-like effects do not harm the users, but it can also stop one from focusing and completing tasks.

To many users, Doug’s Varin is like a breath of fresh air. It has a rousing pine scent mixed with the smell of damp earth. When crushed or in large amounts, its sweet note becomes evident.

Doug’s Varin, with a sweet lemony and pine-like flavor, tastes like how it smells. Upon exhaling, it leaves a woody aftertaste. Its smoke, though, can be a tad bit harsh. Potentially, it may cause some people to cough a little. A way to make the smoking experience as pleasant as it can be is to use water pipes or perc bongs.

Some adverse effects are tradeoffs for the benefits marijuana provides. Doug’s Varin is likely to induce varying degrees of dry mouth and eyes. It is also possible that some people may experience momentary dizziness or have a slight headache.

Although there have been no reports on its capacity to cause people to feel paranoid or anxious, it is best to be mindful of the amount of usage.

Three main compounds that contribute to Doug Varin’s medical value – CBD, THC, and THCV. Most users should be familiar with CBD and THC, but THCV until this day remains somewhat obscure. Ironic, though, as it is this compound that has such immense potential as medicine to different ailments.

Studies and research may be at its infancy stage, but there are reasons to believe it can help relieve tremors and panic attacks as well as stimulate the brain and promote bone growth. And, as mentioned earlier, one of the most exciting probable use of Doug’s Varin is to curb the appetite.

Besides THCV, the other two compounds also provide significant benefits – directly and indirectly through its psychoactive traits.

The happy high induced by Doug’s Varin is excellent at enhancing moods and getting rid of negativity. As such, it is perfect for relieving accumulated stress. Alternatively, it can also be used as an anti-depressant. Its uplifting effects can positively influence the attitudes of those with depression or PTSD.

A great analgesic, Doug’s Varin provides a reprieve for users suffering different kinds of aches and pain. These include fatigue, muscle tension, nausea, and cramps. Meanwhile, its anti-inflammatory properties can effectively ease swelling and redness.

There is no data on the growth patterns of Doug’s Varin. However, it should not deviate too much from typical Sativa plants.

It should thrive well in a dry and warm climate. Working with it indoor may require more work, but the environment is better managed. Not to mention, there is less risk of pests and other diseases. Humidity level needs regular monitoring especially when growers top it, and it grows more lateral branches.

Once mature, Doug’s Varin produces thick, medium-sized nugs that are neon green in color. Around it is tiny golen pistils that radiate when shined on. The hairs also give the trichome frosting an amber tint.

Doug’s Varin flowers between 8 to 9 weeks and produces 10 to 12 ounces of buds per square meter.

Outdoors, Doug’s Varin can yield more than 12 ounces of buds per plant by late October.

How much does the Doug’s Varin strain yield?

Doug’s Varin yields 10 to 12 ounces per square meter indoors and 12 ounces or more per plant outdoors.

How much THC does Doug’s Varin strain have?

What are the origins of the Doug’s Varin strain?

Doug’s Varin is a rare and mysterious strain, and all we know is that it originated in California.

Have you ever smoked or grown your own Doug’s Varin? Please let me know what you think about this marijuana strain in the comments below.