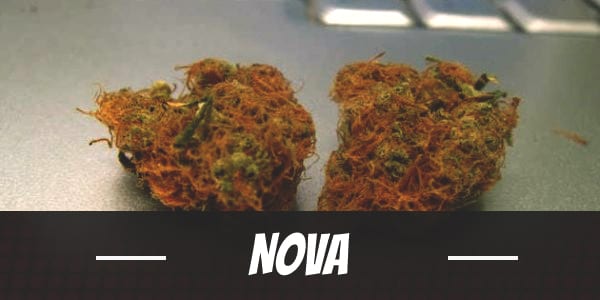 Nova is Tweed’s version of the famed medical Pennywise hybrid. Like its inspirational strain, it has an equal or 1:1 ratio of cannabinoids and trichomes. Because of this, its effects are less intense but extremely relaxing. However, its medical benefits are far superior than other strains.

In creating Nova, the Canadian licensed producers took the same two strains that created the Stephen King inspired hybrid – Harlequin and Jack the Ripper. The former is a citric strain with THC levels testing over 20%. It is most known for the intense, visual high it induces. Meanwhile, the latter is a prodigy in the medical marijuana industry with CBD to THC ratio being almost always 5:2.

Though both are Sativa dominant, Nova is a largely Indica phenotype. However, it did inherit Harlequin’s medical effects. And, in so doing, has made itself invaluable to the medical marijuana market.

Because Nova has an equal ratio of psychoactive compounds, its effects are not as intense as that of other strains. However, test data reveals that THC levels may sometimes get as high as 15%. As such, the Indica-dominant hybrid’s value extends beyond the medical and may even be recreational.

Either way, it takes a while before the high sets in. But, when it does, it begins with a euphoric rush to the head. With outstanding Sativa genetics, Nova successfully sends users on a mentally stimulating trip. The uplifting bliss also promotes a clearer mindset and elevated levels of energy. Armed with free-flowing thoughts, many indulge in a brainstorming session.

But, unbeknownst to users, the Indica influence of Nova begins to creep in. Soon, a wave of relaxation washes over the body and complements the head high. Though pronounced, it is not crushingly sedating. Instead, it soothes the muscles. Although, tired souls may find themselves feeling drowsy.

Of course, that is not the case for everyone. Instead of feeling sleepy, some users feel the urge to eat. It may be of use to have snacks around but that is up to the user.

When the high wears off, it is gentle and breezy. Often, users do not notice it leave. However, those who smoked too much may be left in a devastating couch lock. As mentioned, the strain does contain moderately high levels of THC. Thus, it is best to be safe.

Nova is known for its exotic fragrance. It has a subtle sweet peppery aroma that comes with hints of lemon. But, another whiff reveals undertones of wood. Once grinded or when combusted, the buds release a dank, earthy note.

Nova also has a unique flavor worthy of attention. Drawing in the smoke, notes of delightful berries are apparent. These are accented by hints of sweet lemon. On the exhale, a cool but spicy pine aftertaste makes an impression on the palate.

Two of the most common reactions to smoking marijuana are dry eyes and a cottonmouth. However, that is not the case with Nova. While the medical hybrid still does cause dehydration, it is completely limited to the mouth. This means that it does not strip away moisture from the eyes.

Even as it dries the mouth, Nova’s adverse effects are mild. As a medical strain, Tweed has engineered it to have as little to no downtime possible.

Nova is an exclusive Canadian bud bred solely by Tweed for medical purposes. As such, its chemical profile has been engineered to appease a variety of health problems. To illustrate, this Indica dominant hybrid is characterized by a happiness inducing high at the onset. Though it may be purely recreational to some, it is of great therapeutic value to patients suffering from depression and PTSD.

Not only that, its mood enhancing abilities take away dilemmas caused by work or other external factors. For this reason, Nova also makes for an effective stress reliever.

Nova has a 5% CBD value, exceeding that of most recreational strains. At that level, it can effortlessly reduce inflammation. Moreover, the herb can also be used as a painkiller. A few tokes of this hybrid can ease all sorts of aches and pains like migraines, headaches, and body aches.

With regard to growth expectations, one can expect Nova to have similar growth patterns as Pennywise.

As an Indica leaning hybrid, Nova has a sturdy structure. Because of this, it can be grown easily indoors and out. But, to maintain the chemical composition of the strain, it is best grown in controlled environments.

Part of Nova’s upkeep is topping it early to keep it short. Although it is dominantly Indica, its exceptional Sativa parents have influenced the plant’s height. Thus, it is best to trim and cut early on. This will also promote lateral branching.

Because there is no saying what Nova is resistant, it is best not to expose it to extreme changes in temperature and humidity as well as large numbers of pests. As such, growers should keep an eye on the plant and its growing environment.

With Tweed maintaining a proprietary hold on Nova, aspiring home growers are out of luck. However, this is understandable. Unlicensed producers may falsely advertise their possibly chemically altered version of the strain as the original one. Not only that, the wrong people may make unrealistic medical promises. Such practices can not only potentially damage Tweed’s reputation, but it can also harm users.

Indoors, Nova flowers after 8 and 9 weeks. At harvest, its yields vary between 12 and 14 ounces of buds per square meter.

Have you ever smoked or grown your own Nova? Please let me know what you think about this marijuana strain in the comments below.