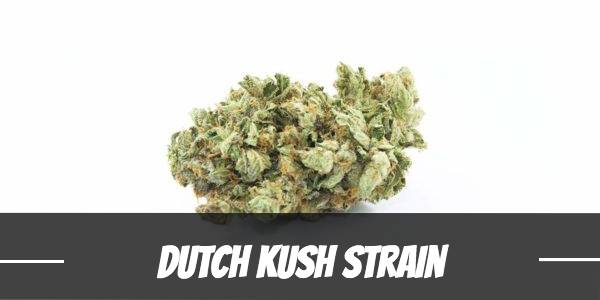 The indica dominant Dutch Kush promises a sedating end with its THC levels of 25%. It starts off with a gentle cerebral euphoria that prepares one for the upcoming body-centered comedown. Eventually, as users slip into their happy places, the light pressure evolves into a heaviness in the limbs that lulls users to bed.

It is powerful, potent, and potentially devastating when used beyond moderation though. Improper dosing makes saying no to its invitation to close the eyes difficult. As such, starting with a low dosage and then properly pacing the strain is necessary.

Therapeutically, it provides a reprieve against a series of mental and physical health issues with its stress-crushing head and body buzz. As such, it continues to have significant medicinal value among patients.

Dutch Kush is a strain best used on a lazy day or the evening after a stressful one. It has a soothing head and body blend that clears away the negativities of the day. In its place, there are happy thoughts that encourage an upbeat and cheerful mood.

Casual users will find that it tends to be quite stimulating to the mind too. The mental space freed by the clarity allows for fresher perspectives and a sharper sense of focus. Although subtle, the newly found goal-oriented motivation tends to awake the appetite.

Finding a comfortable spot is essential a toke of the Indica-leaning strain. During the comedown, it envelops the body in deep relaxation which could sometimes turn into a devastating couchlock depending on the dosage. As such, it would be best to have some snacks prepared. In this way, users need not wait out for the hunger to be gone.

Dutch Kush is a sweet-smelling strain, exuding hints of caramel and brown sugar. Complementing it is a tinge of berry that gives it a subtle sourness. Breaking and combusting the buds, however, reveals its blend of flowers, earth, and coffee beans.

Enthralling the senses is a blend of coffee and berry. It is sugary sweet with sour hints that complement its caramel and earth undertones. On the exhale, it leaves a floral aftertaste.

Outside of the usual cottonmouth, there is a potential for dizziness and anxiety when toking Dutch Kush. This is especially true when using beyond moderation but one’s disposition before the high also has significant effect. As such, apart from pacing consumption, users should also monitor one’s mood.

Dutch Kush is perfect against body-centered problems. It has a soothing head buzz that unties knots in the muscles, relieves pain, and appeases aches. A natural analgesic, it could be an organic alternative to opioid-based medicine that can sometimes come with side effects like nausea.

In fact, Dutch Kush prevents the condition by stabilizing turbulence in the stomach that could lead to vomiting. It also enhances the appetite which makes it an excellent companion for people with eating disorders. With the guidance of a health professional, one could gain back the lost weight in a few months.

Apart from its physical benefits, the Indica-leaning strain is also a source of reprieve against stress and psychological distress. It calms the overwhelming dread, eliminates self-depreciating thoughts, and fights against fatigue with its gentle euphoria. As a result, it could also be used as an anti-depressant, anxiolytic, and antipsychotic.

The relaxing buzz eventually settles in the limbs and lulls users to bed. Its sedating comedown enhances the quality and quantity of sleep. As such, it is a source of reprieve to people with insomnia.

Dutch Kush is relatively easy to grow. It exhibits many desirable traits including a short height, a sturdy frame, and excellent immunity against a multitude of common pests and diseases. Not to mention, it is short flowering and high yielding.

No doubt, it would make for a good introductory strain that beginners could cultivate. The versatile plant could flourish in just about any condition and environment. Outdoors, it prefers an area that has temperate climate with just enough sun to provide it with the energy it needs. Growers from the northern hemisphere need not fret as it performs equally well in cooler weather.

Undoubtedly, indoor growing comes with more leverage. Growers could install fans, lights, ventilation systems, or carbon filters to supplement the plant’s growth and meet its needs. One could even choose between a soilless and soil-based medium. The former ensures fast growth rates while the latter improves upon a bud’s terpene profiles.

Dutch Kush has a short flowering period of 7 to 9 weeks. Once ready for harvest, it yields up to 18 ounces of buds per square meter.

Flowers usually bloom around the last week of September to the middle of October for growers in the northern hemisphere. The southern hemisphere, on the other hand, will likely see buds around April. Once ready for harvest, it produces at least 18 ounces per plant.

What is the Dutch Kush strain yield?

How much THC does Dutch Kush have?

What are the origins of the Dutch Kush strain?

Dutch Kush was developed by Paradise Seeds in Amsterdam.

Have you ever smoked or grown your own Dutch Kush? Please let me know what you think about this marijuana strain in the comments below.