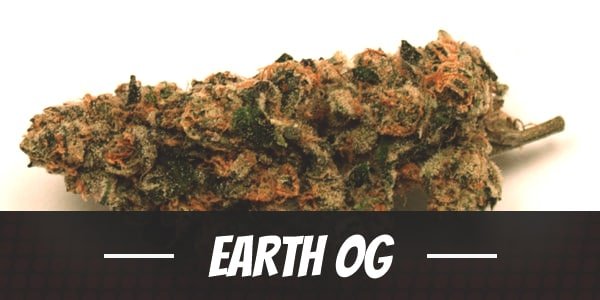 Strains that can make people think often leads to introspection if it is potent enough. Others, though, makes people feel more sociable. So, instead of sitting alone lost in deep thoughts, mingling becomes natural and fun. One hybrid that can lead to one of the two is Earth OG. We are not sure of the original breeder, but it could be Apothecary Genetics, which have the seeds.

Earth OG comes from a solid line that experts deemed as legendary. In other words, it contains the genetics of the best strains in the world.

One is Sour Diesel (also called Sour D). It comes with the pungent aroma of diesel that has become its trademark. Far more important, though, is the way it crushes stress and pain. It does so with its energetic and dreamy cerebral rush.

Another strain used is Ghost OG. As everyone knows, many of the top hybrids today in the West Coast of the USA comes from one classic, the OG Kush. It has spawned a few phenotypes that have become as renowned as the original, and one of them is Ghost OG. While Sour Diesel induces a strong body high, this one has a more balanced Sativa and Indica effects.

Both Sour Diesel and Ghost OG have won countless awards and accolades. Each of them has already established themselves as Hall-of-Famers in the cannabis scene. With these two as the parent strains, there is a lot of expectations from Earth OG.

Earth OG is a very potent strain. As soon as the first toke, its intense effect begins with an electrifying mental buzz. For some people, it results with a clear head accompanied by deep thoughts.

Used with a group of people, users are likely to become more sociable. But depending on how much one uses and limitations, some may end up in deep introspection.

Soon enough, the dominant side of the strain starts to kick into the body. Once it does, it hits like a freight train. As soon as the deep body relaxation sets in, then users will find it hard to get up. In most cases, they end up sitting on the couch or lying on the bed lost in their thoughts. Most will also not even know that they fell asleep and slept through the night.

It appears that the influence of the OG genetics is more evident when it comes to the fragrance of the strain. Earth OG emits a refreshing, earthy aroma that comes with a subtle hint of sweet and sour lemony note. It is also accompanied by the unmistakable smell of fuel.

Earth OG, to the delight of the users, comes with a pleasant aroma that carries over. While its smoke is not the smoothest among all strains, it is also not harsh. In some ways, some people can further describe its taste as being a little exotic in that there is a woody aftertaste.

Earth OG is one of the most enjoyable strain that anyone can use. But it does come with some annoyances. There are always adverse effects to expect when using cannabis. For instance, having dry mouth and eyes is common.

Compared to others, it seems that other reactions are more pronounced. What we mean by this is that assuming that all other factors are the same, there is more chance for some conditions to occur by using Earth OG. One such adverse effect to look out for is getting a headache.

Like its parent strains, Earth OG is excellent in crushing stress. But the most significant benefit for medical cannabis users is pain relief. By inducing deep relaxation, the hybrid delivers a sedative-like property to the body. It helps calm the muscle as well as provide comfort to people with chronic pains and aches.

As mentioned, taking out stress is one thing that the strain can do well. Add to that the body relaxation, it can help people with mental health conditions. Instead of focusing on the troubles and whatever it is that causes emotional turmoil, users find comfort and shift their focus to other thoughts. People with depression, for example, will find it easier to cope with their condition.

Finally, the best use of Earth OG is for sleeping. Patients who need to rest and insomniacs can visit dreamland an hour or two after using it.

Seeds of Earth OG is available, that is the good news. It is also not that difficult to cultivate whether indoors or outdoors. One thing that people can do to bring out the beautiful purple hues is to move the plant to some 10 to 15 degrees lower than the average temperature before flowering.

Earth OG has a flowering time of nine weeks. Once ready, growers can expect a yield of 7 to 13 ounces per square meter.

The plant loves the Mediterranean climate. Under the right condition, it should start to flower in the first few days of October. Once it is ready for harvest, one can expect to pick at least 13 ounces per plant.

Have you ever smoked or grown your own Earth OG? Please let me know what you think about this marijuana strain in the comments below.