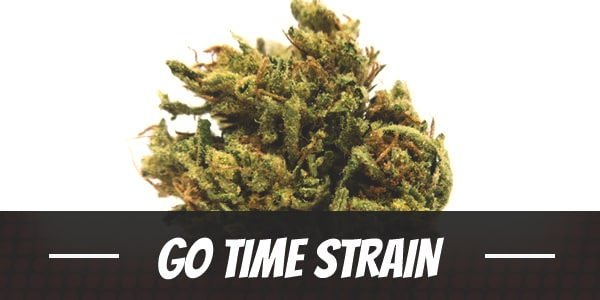 Go Time delivers a stimulating head high with an active buzz that brings back the mood. It gets users pursuing forgotten passions or reviewing previous work with fresh perspectives. Its zesty terpene profile has the same invigorating effect on the senses too.

In creating the strain, JinxProof used TGA Subcool’s Jesus OG Kush which is distinct for its heavy yields and sturdy structure. Not to mention, it has a distinct well-loved cerebral buzz that improves focus. Using its holiness as a base, the breeders then added the illustrious but elusive Norton which is a choice strain to use for producing concentrates. The same revitalizing buzz can also be used to complement a steamy night ahead. It arouses the mind and awakes one’s carnal desires. Hence, it is a wonderful bedtime companion to use with a loved one or a partner.

The same revitalizing buzz can also be used to complement a steamy night ahead. It arouses the mind and awakes one’s carnal desires. Hence, it is a wonderful bedtime companion to use with a loved one or a partner.

Almost immediately after the first two to three puffs, Go Time delivers a rush of energy in the temples that uplifts the mood. The behavioral change is almost instantaneous too as downturned faces begin to form a smile that reaches ear to ear. In all likelihood, enthusiasts are enveloped by an innate sense of happiness that can only come from within.

For casual users, the upbeat mood and mental clarity is a transformative experience. It creates more space for thoughts to flow and form freely into ideas. Sparking creativity, it piques curiosity and ignites one’s passion too.

Gradually, the same energizing buzz begins to trickle from the temples. It invigorates users as it removes aches, pains, and tension in its wake. Replacing it is a heightened sensitivity and awareness that improves focus and allows users to work for hours without feeling tired.

Due to its wake-and-bake qualities, Go Time is best used in the morning in lieu of coffee. It not only keeps users awake throughout the day with its soothing euphoria but also productive as it continues to bring renew motivation. Using it at night, however, may result in wakefulness.

Go Time has a zesty scent that invigorates the senses almost immediately after the first whiff. It has citric overtones of lemon complemented by subtle notes of spicy herbs, skunk, and diesel. Broken apart or combusted, an earthy trail permeates throughout the room.

In the palate, Go Time explodes into a myriad of flavors ranging from sour lemon to diesel. Swirling its smoke in the mouth reveals its spicy herbal undertones that seem freshly picked as it continues to be enhanced by the taste of wet soil. On the exhale, it leaves a skunky aftertaste that lingers for quite a few hours.

A cottonmouth can be expected after using Go Time, regardless of how much of its buds are consumed. This is because cannabinoids interfere with the body’s natural ability to produce and retain moisture. At times, it may be accompanied by dry eyes. The dry spell is mild but temporary. Still, users may want to avoid drinking alcohol or coffee as it can exacerbate the effects. With that said, downing a few glasses of water throughout the day can help mitigate the effects.

Stress relief is among the top reasons as to why enthusiasts turn to marijuana. To this end, Go Time offers the same effect. It has a happy high that can ease the overwhelming dread that life’s daily stressors bring. In a similar manner, it also manages symptoms of mental health issues like depression, PTSD, and anxiety.

The stimulating effects of the psychoactive compound also spread throughout the body. For instance, its analgesic and energizing qualities relieve a variety of aches while simultaneously reinvigorating the body. As such, it is a source of comfort for users dealing with fatigue as a result of disease or disorder. Meanwhile, its anti-inflammatory properties reduce redness and swelling.

One of the best times to use Go Time is right before a meal. Its restorative effects encourage a hearty appetite that leaves users wanting to eat more. Hence, it is a great food or digestion aid for patients dealing with cachexia or eating disorders like anorexia.

Go Time is not a tall plant. In fact, it is quite short and is a perfect candidate for indoor growing. It also adapts well to the Sea of Green method which takes advantage of its petite stature by placing at least four of it close together. By doing so, it not only hastens the flowering period but also encourages the creation of more budding sites.

Controllable environments often give growers a good advantage when it comes to adjusting important factors like temperature, lighting, and humidity. However, it may need to be pruned often. Its branches, as well as broad fan leaves, can sometimes interfere with airflow and light distribution in the lower nodes. Removing certain parts will also improve nutrient circulation to the rest of the plant.

TIP: Buy seeds like Go Time at our seed bank

In a garden or farm, Go Time showcases its hardy structure through its ability to withstand a myriad of unpredictable growing factors. For example, in spite of its propensity for a Mediterranean environment, it still performs well in the cooler weather of the northern hemisphere. Not to mention, it produces higher yields with each bud boasting impressive flavors.

Go Time flowers quite fast, at a rate of 8 to 10 weeks per batch. Once mature, growers can expect at least 12 to 16 ounces of buds per square meter at harvest.

In the northern hemisphere, Go Time blossoms from the middle to the last week of October. A hefty yielder, each plant produces at least 16 ounces of buds.

Have you ever smoked or grown your own Go Time? Please let me know what you think about this marijuana strain in the comments below.