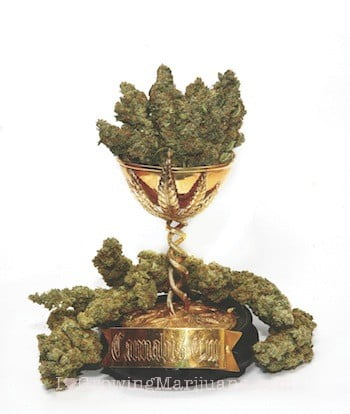 The world’s premier cannabis festival is called the High Times Cannabis Cup.  This festival was founded by Steven Hager in 1987.  The cannabis fun starts each year in November in Amsterdam.  Judges come from all over the world to vote for the best marijuana and select the cannabis cup winners.

Cannabis Cup Categories
There are many categories in which to enter at the Cannabis Cup such as:

The overall winner receives the Cannabis Cup for having the best cannabis variety in the competition.  A group of VIP judges test each bit of marijuana that is in the contest to determine which one is the best.  Seed companies enter these contests to promote their products and prove that they are the best when it comes to their strain of marijuana.  The Cannabis Cup is not just about pot, however.  There is live music, food, comedy and even a business side to the festivities.

Tourism and the Cannabis Cup

The Netherlands pulls people from all over the world that wish to attend the Cannabis Cup Festival.  The use of marijuana in most of the Netherlands has been decriminalized.  In fact, a lot of the marijuana that is in the actual completion is from local coffee shops in Amsterdam.  Surprisingly, the amount of new strains that enter the competition helps create a culture of cannabis that is always changing.  The judges test these new strains and judge them according to many different certifications.  Many tourists from all over the world travel to attend this festival.

The Medical Cannabis Cup has been created and celebrated in the United States to help the medical marijuana movement.  The very first Festival took place in June of 2010, in San Francisco, California.  The movement to help the importance of use of marijuana for medical purposes is still going strong today.

Anyone can be a judge if you want to pay the fee.  When you purchase the right to be a judge at the Cannabis Cup you get to try different varieties of marijuana in many different forms.  If you buy your pass before June 1st it costs less, the price goes up afterwards.

People from all over the world attend the Cannabis Cup competition.  In order to get the best experience you may want to consider becoming a judge.  Over the years the Cannabis Cup has seen a decline in attendance, but recently their numbers have shot up and continue to increase.  The more cannabis is brought to into the public eye, the more it is realized that this natural product is not the type of drug that deserves to be shunned.  By attending a Festival you will learn more about the different types of pot and even be able to talk to the people that grow and produce some of your favorite products.  If you would like to read more about the Cannabis Cup Festival, click here for the official website.

Grow you own Cup Winners? We sell the finest marijuana strains from Amsterdam, and ship them worldwide for free. You can buy marijuana seeds in our marijuana seed shop.

1 comments on “Grow Great Strains to Win the Cannabis Cup”