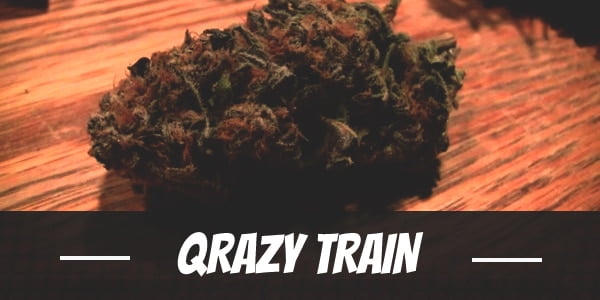 Whoever said that weed could only be made from one or two cannabis varieties has never come across a strain that was developed from an unbelievable number of strains–well, four to be exact.

Indeed, that is possible. When breeders choose to develop new strains, they have all the freedom in the world to choose which strains to cross and obviously, how many of them should be involved in the process. This is a fact that has somehow made it possible for users to enjoy varying levels of potency and intensity of flavors and aroma.

Basically, the entire profile of a strain relies so much on what the breeder has in mind. There are those that settle with inbreeding while others would rather cross two strains from a totally different lineage. There are a few breeders, however, who choose to go crazy with the number of strains they cross.

Speaking of crazy, here is one strain that has a pretty insane family tree. This strain is called Qrazy Train and there is probably no other name more appropriate. The following information below should be enough explanation to that.

Qrazy Train has quite an interesting family tree. TGA Genetics, its original breeder, have decided to cross four of the most renowned strains in the cannabis community: Trainwreck, Trinity, Purple Urkle and Space Queen.

The cross has produced a well-balanced hybrid with a potent high and a unique combination of flavors.

To begin with, TGA Genetics has provided on their website that the Qrazy Train’s THC level is only at 14.36%. However, some sources would claim that the strain’s THC concentration can reach as high as 27% in some tests. Thus, while others would believe that the strain is not as potent, it is actually the other way around.

Qrazy Train has a well-balanced high that starts off almost immediately with a happy and uplifting feeling, leaving users in a very social mood that further stimulates laughter. The user enjoys this sense of euphoria along with an improved focus that can last for a while before it slowly mellows down.

As the Indica effects of Qrazy Train kicks in, users will begin to feel a little heavy on the body that is rather relaxing with a mild sedative upshot that does not necessarily lead to couchlock. Therefore, the strain is ideally used as a daytime strain for both recreational and medical users.

This is just on aspect of Qrazy Train that makes it very appealing to users. The strain gives off this sweet and fruity smell that is accompanied by some notes of pine, lavender, and must.

Qrazy Train is perhaps one of the few strains out there that offer some really unique and varying combination of flavors. It almost feels like tasting different flavors in different occasions.

The strain generally tastes sweet and fruity with hints of spiciness. The fruity flavor, however, can sometimes be reminiscent of grape or blueberry while other users would describe it to have more of a melon and champagne undertones.

Just like any typical cannabis variety, Qrazy Train can also potentially cause a few adverse reactions. To wit, the strain is more likely to cause dry mouth and dry eyes among its users. Dizziness and headaches are also possible, but perhaps more common among users with low tolerance. This may even escalate to a mild case of paranoia which users should be more careful about.

Just like its THC concentration, there are also varying information about the strain’s CBD level. Although, realistically, it appears that the strain is not able to produce anything higher than 1% which makes it very less likely to help patients who benefit more on higher CBD levels.

Nonetheless, it is very effective as a stress reliever and antidepressant to users who need a little distraction from certain negative thoughts. Also, the strain has some really good analgesic properties that can efficiently provide temporary relief to pain including headaches.

Lastly, users may get the munchies while smoking this weed so it may be helpful to users with really poor appetite.

Qrazy Train is known to produce impressive yields in such a short time. Also, the strain may be cultivated indoors or outdoors and is very forgiving to molds, pests and temperature changes in the environment which make Qrazy Train easy to work with.

TGA Genetics suggests topping the plant early. According to the breeder, this is the best way to go to increase the yield of the strain.

Qrazy Train’s indoor flowering time takes about eight weeks. Though the information about its exact yield is unavailable, the breeder has stated that Qrazy Train is a heavy yielder. Thus, we can make an assumption that the strain is capable of producing a yield of about 16 to 20 ounces per square meter.

For outdoor cultivation, Qrazy Train may be harvested by the end of September or October, and the yield is just as heavy at 24 ounces or more per plant.

Have you ever smoked or grown your own Qrazy Train? Please let me know what you think about this marijuana strain in the comments below.