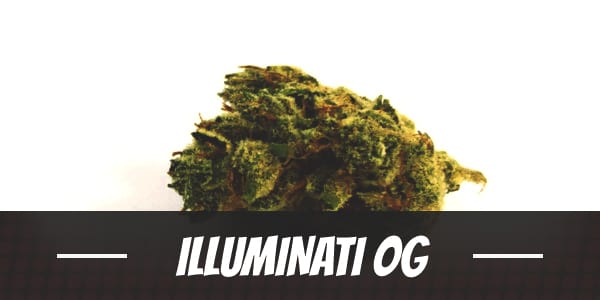 Saying ‘illuminati’ anywhere will attract attention and raised eyebrows. Not inside a cannabis dispensary though. It could only refer to the Illuminati OG, an Indica-leaning strain with a unique blend of effects.

Its onset is initially stimulating, inducing a gentle rush of euphoria that almost instantly improves the mood. It clears the mind and leaves users feeling happy. At the comedown, it gradually becomes a soothing sensation that grows heavier as it settles in the limbs.

No doubt, it will lock users to the couch if used beyond moderation. Keeping the dosage manageable, however, will turn the deep relaxation into a sedating comedown. This particular trait it can attribute to Club 33 OG.

Illuminati OG, with its THC levels of 17% to 18%, pairs a mood-enhancing onset with a soothing comedown. It starts with a light buzzing euphoria that gradually improves one’s disposition. The innate sense of happiness also clears the mind which sharpens the senses and increases focus.

After about an hour or two, a soothing sensation begins to ebb from the temples. It swarms the body as it passes through the back of the neck and down to the lower extremities. Kneading the muscles like a masseuse, it releases tension and tightness around the muscles so users can move around easily.

Increasing the dosage leads to a sedating comedown. It plants a heaviness in the limbs that makes the eyes droop with drowsiness. In all likelihood, users will fall asleep without even knowing it.

The blend of its cerebral and bodily effects makes it better-suited for nighttime use. Consumed a few hours before sleep, it allows users just enough time to complete a few chores or tidy up. Thus, by bedtime, one enters into a deep, unencumbered slumber without distractions.

Illuminati OG has a sweet aroma that is reminiscent of freshly picked fruits. Breaking apart the buds further intensifies the illusion as it produces a citric overtone before combusting into an earthy smoke.

The smoke can sometimes be pungent especially when the citrus develops into a sour lemon. Counteracting the tanginess is a sweet undertone reminiscent of earth. On the exhale, it turns into a refreshing pine aftertaste.

Users usually experience a mild dizziness or a headache when toking large amounts of Illuminati OG. In moderation, however, the side effects are usually limited to the typical dry eyes and cottonmouth. The mild reactions are long-lasting though, so it is best to stay hydrated throughout the high as well as after it.

Illuminati OG presents many uses outside its usual recreational grounds. The gentle euphoria, for example, could reduce stress and uplift the spirits. It also instills a calm disposition that erases worries. In its place, there is an innate sense of positivity that radiates outward.

It delivers an invigorating buzz that improves the mood as it persists. The clarity is also key to managing symptoms of conditions like depression, anxiety, and PTSD albeit temporarily. The light stimulation is also enough to wake the appetite. As such, patients with cachexia or eating disorders like anorexia may turn to the strain for quick relief that will not only ignite one’s cravings but also help ease the stomach.

Its psychoactive compounds also lend a hand to its ability to eliminating aches and pains all over the body. It reduces the appearance of redness and swelling while also relieving the sensitivity. Apart from that, its anti-inflammatory properties also aid in appeasing mild headaches and migraines.

Illuminati OG is a robust plant that exhibits various Indica traits. These include a sturdy structure, short stature, and outstanding adaptability to different growing environments. Still, it may not make for an excellent beginner’s introduction to growing cannabis.

At the moment, the strain is only available as a cutting. It tends to be quite sensitive, especially at the beginning, and could fall victim to pests or disease. However, once it develops a root system, its immunity boosts significantly.

Using soil as a medium will undoubtedly better its terpene production, resulting in more flavorful buds. But one could also go for soilless mediums such as hydroponics. It delivers nutrients directly to the roots instead of buffering it through the soil which leads to explosive growth and a bountiful yield.

With regard feeding and nutrition, there is no need for deviation from the standard practices. It could benefit from boosters which aid in bud production especially during the flowering period. Growers with knowledge of advanced growing techniques may also employ techniques like the Screen of Green. This method requires installing a screen above the plant and gently weaving the branches into the net to create multiple colas. It shortens the vegetative phase while also increasing yields.

Nearing harvest, the buds become denser; taking on the shape of pebbles and hearts. It develops the shade of olives with bright amber pistils contrasting the greenery. Further accentuating its look are sparkling crystal trichomes.

Illuminati OG has a flowering period of 7 to 9 weeks. In this short span, growers can expect at least 10 to 12 ounces of buds per square meter.

The cutting retains the same flowering period of 7 to 9 weeks. The latest that growers can cultivate the clone is right before winter which is around the last week of October. Once ready for harvest, it produces at least 12 ounces of buds per plant.

What is the Illuminati OG strain yield?

Illuminati OG yields 10 to 12 ounces per square meter indoors and 12 ounces or more per plant outdoors.

How much THC does Illuminati OG have?

What are the origins of the Illuminati OG strain?

Illuminati OG is believed to have came from the Club 33 OG strain.

Have you ever smoked or grown your own Illuminati OG? Please let me know what you think about this marijuana strain in the comments below.