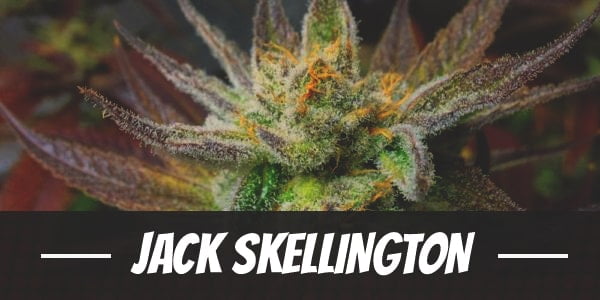 Back in 1993, people from all over the world came to know Jack Skellington. He is the main protagonist in the hit animation flick The Nightmare Before Christmas. For some reason, TGA Subcool Seeds thought it would be cool to name a hybrid they developed after Holloween Town’s Pumpkin King.

While on the topic of Halloween, that should give people a clue on Jack Skellington the strain. The breeder used two notorious hybrids that come with some psychopathic traits to develop this cannabis.

First is the Killer Queen, a cross between G13 and Cinderella 99. Among its notable traits is that it induces a reinvigorating high with mental clarity. Depending on how it is used, it can also cause deep introspection.

Killer Queen was paired with the infamous Jack the Ripper. Incidentally, this strain is the flagship of TGA Subcool Seeds. People who use it often find its effects intense and in some cases, can cause visual distortions.

As one can see, both Killer Queen and Jack the Ripper do not only have notorious-sounding names; both are also very potent. As such, the same can also be expected of Jack Skellington, at least in theory.

A mostly Sativa strain, Jack Skellington does not possess the same amount of THC that its parents have, but the psychoactive properties it brings to users remains just as wonderful.

For many people using Jack Skellington, the best way to describe its effects is that it is refreshing and reinvigorating during its onset. Often, the energy boosts it induces is more than enough to get one up and to run. In that sense, it is a perfect wake-and-bake strain.

Soon, this is followed by an uplifting buzz that leads to a euphoric cerebral experience. Not only do users have a clear mind, but they also seem to have a sharper focus. It also unlocks the creative side of users enabling thoughts and ideas to free flow. A lot of people are also likely to have a heightened sensitivity where sights and sounds become amplified.

Meanwhile, the strain also causes to the body to feel relaxed without any sedating effects. In some ways, the physical effects of the Jack Skellington keeps the mental high from overwhelming the users.

Use Jack Skellington in moderation. In case of overconsumption, then it can become a bit overwhelming. Not that it is a bad thing, but some people and especially the beginners may find the experience a tad bit too intense. Like its predecessor Jack the Ripper, it may lead to mental confusion.

Jack Skellington comes with a pungent odor. As soon as users open its container, it does not take long before a blend of fuel and earth fills the room. Once its nugs are broken, it emits a sweet and citrusy note with a fruity quality to it.

How it smells is how it tastes, but much less pronounced. Jack Skellington has a sweet and fruity note that comes with a lingering tangy and citrusy aftertaste.

Often people associate high THC with adverse effects. That may very well be the case, but there are also other factors at play. Nonetheless, Jack Skellington may be milder than its parent strains, but it can still cause some conditions that seem to be more pronounced than average. For instance, the euphoric cerebral buzzing in the head may cause some people to feel dizzy. A few people may also feel a little bit paranoid.

At any rate, these conditions, if they do occur, tend to be mild. It goes without saying that when one uses more than they can handle, then the symptoms become more pronounced.

Because it is cannabis, users should expect to experience dry mouth and dry eyes.

The ability of Jack Skellington to enhance the mood is its top medical use. It can melt away stress in no time at all resulting in feeling not only uplifted by happy or even euphoric. Such trait, no doubt, benefits people with depression and related illnesses or conditions too.

Because it provides a boost in energy, users feel reinvigorated and are likely to stay active and motivated. Some people use it to combat fatigue, for instance.

Unfortunately, this strain does not come with exceptional pain-relieving properties. At best, any relief is likely due to psychological reasons instead of physiological.

Jack Skellington has the structure of a typical Sativa plant. It means that it is a tall plant, but it can be wide. By all accounts, even beginners in cultivating cannabis should be able to nurture it to maturity. It thrives whether it is grown indoors or outdoors.

Most growers choose to cultivate the plant indoors. Growers can use hydroponics. Even better, it is highly adaptable to the Sea of Green training method. Because the intent is to keep it short but encourages a more lateral growth, topping it early is needed. It has a flowering time of eight weeks, and that is unusually fast. During harvest, growers can expect to pick around 10 to 12 ounces of buds per square meter.

As mentioned, the plant has the structure of a Sativa, but its flowering time is typical of an Indica plant. It transitions to bloom stage during the last week of September. Under the care of experts and warm climate it prefers, each plant can produce 12 ounces of buds or more.

Have you ever smoked or grown your own Jack Skellington? Please let me know what you think about this marijuana strain in the comments below.