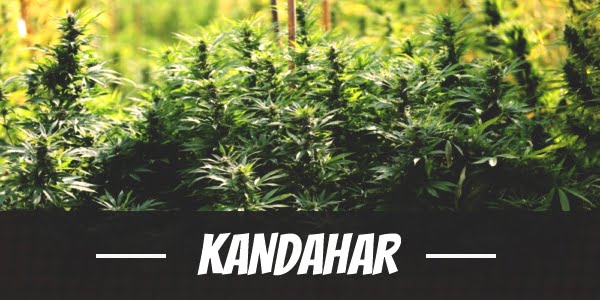 Kandahar today is more known about its troubles rather than its historical importance. By problem, we mean the war against the Taliban and its aftermath. Within the cannabis community, though, the significance of this province has not gone unnoticed. After all, it is often called the birthplace of Cannabis Indica.

Bred by Ministry of Cannabis, the idea was to introduce a small Sativa percentage to the Afghani. By doing so, it helps provide a more stable experience as well as make the plant more vigorous. After what must have taken a lot of deliberations, the breeder decided to use Afghan Skunk.

The name Afghan Skunk should be familiar to cannabis users, especially the old-timers. A cross between Afghani and Skunk No. 1, this strain is what many consider a legend or a classic. Using Afghan Skunk, the breeder backcrossed it with Afghani to develop Kandahar. In essence, the choice of using this name is in honor of the region and its role in the propagation of Indica.

The 90% Indica Kandahar, like its predecessors, is very potent. It contains up to 20% THC in some lab tests. Not only does it induce a deep relaxation, but it can almost certainly promote an inseparable love relationship between man and couch.

Kandahar is a creeper. In most cases, it takes around five minutes before its effects set in, but that does not mean it is any less potent. Like may slow-acting strains, there is a higher chance of overusing. So, that is something to think about before using this hybrid.

A mostly Indica strain, it still begins with a mild uplifting sensation that makes users feel good about themselves. As some noted, it can put a smile on the face without even realizing it. Used in moderation or a minimal amount, the body relaxation it induces feels dreamy without the lethargy or heavy couchlock.

Use a little bit more of it, then Kandahar will bring on everything that it has. The deep relaxation it induces not only causes laziness but a heavy couch-lock. Although users are likely to feel euphoric, they also soon find themselves in introspection.

Kandahar emits a woody odor that is reminiscent of sawdust accompanied by a sweet and sour scent with a fruity quality. On that basis, one can say that its aroma is distinct from a typical cannabis.

The fragrance of Kandahar carries over to its taste. Once combusted, its smoke has a more pronounced flavor of dried apricot mixed with honey.

Experiencing cottonmouth is a given when using Kandahar. Some people like to drink lots of water before and soon after using the strain. Other than that, the other conditions do not often occur. If they do, they are also usually mild. These are dizziness, dry eyes, and headache.

As mentioned earlier, some people tend to overestimate their ability. Failing to understand that it is a creeper, some end up taking a few more tokes. Once it hits, there is no doubt that the experience it delivers is absolutely nothing but bliss. Yet, some of these conditions may be more pronounced and possibly, a little bit uncomfortable. Nonetheless, these reactions are temporary and should be gone after a few hours.

A few things are a given when using Kandahar. One is that it is bound to give users the ultimate relaxing experience. It follows too that it causes people to feel sleepy. For this reason, it is best used at the end of the day when there is nothing else to do but to sleep. Without a doubt, this can be an insomniac’s best friend and constant companion in the evening.

The uplifting high combined with the deep relaxation can wipe out stress. As such, people undergoing tremendous pressure or even conditions like depression can greatly benefit from this trait.

For growers to get their hands on dense buds covered with crystals and pale orange hairs, they can cultivate it first indoors or outdoors. While beginners can try this strain, there is no guarantee that it will produce optimal potency or yield.

Kandahar is a short and bushy plant with a lot of lateral branching. Indoors, growers will want to trim and prune its leaves regularly. For faster growth, using hydroponics and combining it with the Screen of Green setup works best. After 8 to 9 weeks, the light cycle can be switched to the 12/12 cycle to trigger the flowering phase. Once ready for harvest, the estimated yield is up to 18 ounces per square meter.

Due to its lineage, Kandahar is a sturdy and resilient plant that can be grown ideally in a warm climate, but it should also be fine in a temperate environment. It starts transitioning to the flowering stage in the first two weeks of October. During harvest, each plant can produce at least 14 ounces of buds and possibly more.

Have you ever smoked or grown your own Kandahar? Please let me know what you think about this marijuana strain in the comments below.