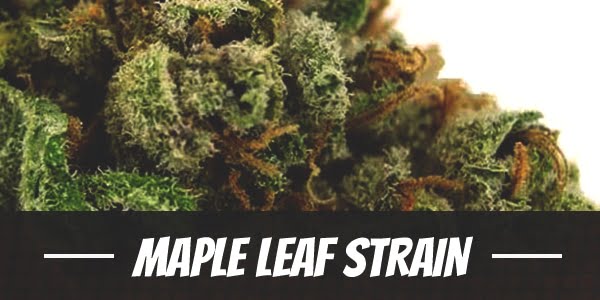 Not a lot of cannabis strains come with an intriguing story behind its creation or lineage. In that sense, Maple Leaf belongs to the minority. Bred and sold in seed form by Sensi Seeds, it has a reputation for a soothing experience.

To understand where the Maple Leaf strain came from, we have to go back in time to 1979. It was the height of the cold war, and USSR was intent on invading Afghanistan. Near the border is Mazar-i-Sharif, noted for its hashish and cannabis culture.

It is in this northern region where a particular breed of marijuana has made its mark for its quality. Indeed, the hashish here is the best there is in the whole of the middle east.

Due to the threat of imminent invasion, the locals allowed one person to smuggle out the seeds. The intent was to preserve the unique plant from extinction. Were it not for the collector, the world would have lost one of the finest Afghani Indica ever. From the surviving seeds of the plant, Sensi Seeds has produced the world-class Maple Leaf.

All over the web, there is one thing that can be confusing. It appears that many people have accepted that the Maple Leaf is a cross between Skunk No. 1 and BlueBlack. Such claim is different from what Sensi Seeds had published. It is, thus, possible that there is another strain that goes by the same name.

Maple Leaf is potent yet gentle at the same time. While it is a pure Indica strain, its effects seem to suggest a small Sativa influence. Its onset begins with a pleasant but euphoric sensation in the head. Feeling happy and uplifted, most users also feel a spark of creativity. And that is a good thing especially for those who also feel aroused. Yes, it is an aphrodisiac for some people and that being the case, creativity can only make it more fun.

As the pleasing sensation drifts down to the body, couples can only hope that they did not use too much. For most people, they find themselves in a state of complete relaxation. Depending on how much one consumed, the strain is more than capable of putting one to sleep. At any rate, used within limits, most people still find themselves locked on the couch.

Maple Leaf emits a pungent and earthy scent that can be a cause for concern with regards to privacy. But the sweet note of citrusy orange makes it such a delight to smell and can prove to be irresistible.

As delightful as it is when it comes to aroma, it also has an intriguing blend of berries and orange. Not only is the Maple Leaf smooth to the throat, but it also has a refreshing aftertaste.

Even such an excellent cannabis strain must also come with some unfavorable effects. It is, after all, still marijuana and as such, dry mouth and eyes are to be expected. However, if these symptoms occur, it is generally mild.

Still, a few people are reporting other ill-effects. Fortunately, these conditions are also harmless and occur only if one were using too much. Some of these concerns include having a mild headache, feeling paranoid or a little dizzy.

Maple Leaf at best is regarded as a potent strain. Although it does not contain an insane amount of THC, it is still powerful enough to become overbearing if one were not careful.

As mentioned, if the plan is to have sex, then use only a minimal amount. Otherwise, all the best-laid plans end up with users snoring on their bed. A safe assumption for Maple Leaf is that if used in moderation, it sets the tone for a peaceful slumber. For that reason, people with trouble sleeping has sought this strain.

Being a pure Indica plant, it has an analgesic property that is helpful for pain relief. Patients with chronic illnesses can find comfort from the constant pain they endure.

Because people using Maple Leaf will feel uplifted and relaxed, it is also beneficial for stress relief. Hence, it also follows that it can help depressed people climb out of the deep hole they found themselves in.

Growers with some experience will not find it difficult to grow Maple Leaf. Of course, cultivating outdoor is a concern and a matter of legality. Other than that, it thrives well in an open area such as the garden. While the plant is short and does not grow taller than 4-1/2 feet, it does have a pungent scent. In other words, people nearby may not see it but they may smell it.

Growers choosing to plant Maple Leaf inside the house can use soil as a medium or hydroponics. For an explosive growth and bigger yield, the plant adapts well to Screen of Green technique. Keep in mind, as the plant starts to grow, it is best to top early. Encouraging it to grow outward tends to result in better production of buds.

It takes at least eight weeks before the plant is ready to transition to the next stage. Taken care off the right way, growers can expect to harvest 7 to 11 ounces of buds per square meter. It is not that much compared to many others, but from Sensi Seeds, these are top notch in quality.

Maple Leaf grows well with lots of sunshine with each plant producing at least 11 ounces of buds. It should start its flowering stage by the end of September.

Have you ever smoked or grown your own Maple Leaf? Please let me know what you think about this marijuana strain in the comments below.