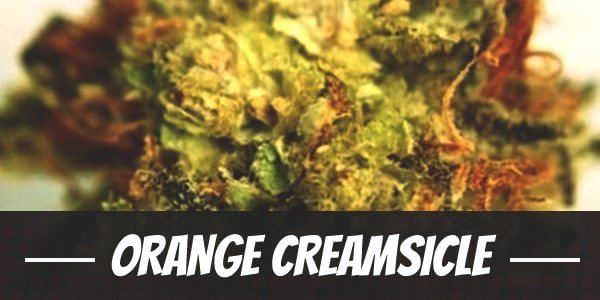 Orange Creamsicle is very much like the iced dessert that it is named after. It is creamy and has a melt-in-your-mouth effect that leaves users savoring the delicious citric aftertaste it leaves. Not to mention, because it boasts a buildable 7% to 18% THC, it is versatile to be enjoyed by users of all levels.

In developing Orange Creamsicle, MTG Seeds used two of the sweetest strains – Orange Crush and Juicy Fruit. The former is an Indica strain with a tangy aroma and taste. It is also quite easy to grow. Meanwhile, the latter is a mostly Sativa bud which lent its cream-flavored terpene profile to its offspring.

Apart from its recreational high, Orange Creamsicle is famous among medical users for its relaxing head and body effects. It is a reprieve against mental health issues with a depressive component in enhancing the mood. At the same time, it provides a sense of relief to patients plagued by chronic pain.

Orange Creamsicle is a fast-acting strain that delivers a rush of euphoria to the brain immediately after the first few puffs. However, it does slam it with its uplifting effects. Rather, it is subtle at first and gradually intensifies. If anything, the sensation is similar to being cradled in clouds as it drifts off to new heights.

It is not uncommon to see users smiling from ear to ear. After all, the initial onset does inspire a sense of happiness from within. Some may even feel ecstatic as moods enhance and the worries go away.

Slowly ebbing its way down from the temples is a light pressure. Subtle at first, it soon intensifies into a surge of energy. It reinvigorates the body as it swarms the muscles and eases away tension. Not only that, it gives an added boost of motivation so users can work on tasks for prolonged periods of time.

Soon, bodily relaxation is will wrap around the user. Once that happens, they’ll get the urge to take a seat and chill. If enough gets consumed, it’s likely that the consumer will become couch-locked. Nonetheless, getting up will still be possible if absolutely necessary.

A versatile strain, Orange Creamsicle can be used any time of the day especially in the morning or early afternoon.

Orange Creamsicle has an incredibly sweet but tropical scent. If anything, it can be likened to newly ripened mangoes or oranges which immediately transport one to a grove of fruits. Blending with it are subtle notes of vanilla and wet soil which become more noticeable as the buds are crushed or combusted.

Orange Creamsicle really does taste like its namesake. It is citric like oranges but dipped in sweet creamy vanilla. On the exhale, it leaves a tropical but milky aftertaste in the mouth that lingers long after the last puff.

There is a chance of getting dizzy while using Orange Creamsicle. At times, it may be accompanied by a subtle feeling of paranoia. Such effects usually come about when one overuses the strain. Most of the time, however, users only experience a subtle headache. Still, it is always best to pace and moderate one’s usage.

Orange Creamsicle induces two other side effects. One being dry eyes and the other a cottonmouth. Both are unavoidable as the cannabinoids in marijuana tend to interfere with moisture production in the body. Though mild, those experiencing discomfort may down a few glasses of water to stay hydrated.

Stress relief is the most commonly cited reasons for marijuana use. In fact, in America alone, a third of users credit the green herb’s ability to manage the unpleasant symptoms of stress. And, to this end, Orange Creamsicle works perfectly.

In inducing its happy high, Orange Creamsicle positively affects negative outlooks. It also calms the mind which is quite helpful in soothing the overwhelming dread which usually affects stressed people. In a similar manner, the mood stabilizing effects also provide comfort to users with depression and other mental health illnesses with a depressive component such as PTSD.

Outside the behavioral, Orange Creamsicle also alleviates a variety of physical afflictions including the various aches and pains caused by over exhaustion or fatigue. As it relaxes each muscle, its antiemetic properties keep users from vomiting any food ingested. For this reason, it is a great companion for cancer patients experiencing the nauseating effects of chemotherapy.

Orange Creamsicle has a similar growing pattern to its Sativa parent Juicy Fruit. It performs best when it is grown in the warm climate of many Mediterranean or equatorial regions. It grows tall and produces airy, tapered buds. Exposed to constant sunlight, it flowers fast and yields high.

This is not to say the plant will not perform well in northern latitudes. Rather, it is slow to flower. Not only that, it may be quite sensitive to its new environment. For this reason, many growers prefer cultivating the bud indoors where one can easily mimic a tropical climate by adjusting factors like temperature, lighting, and humidity.

Grown indoors, breeders may need to top the plant early or shorten the vegetative period to manage its height. Otherwise, it will cramp up its growing space and interfere with air or light circulation. As such, it is essential to apply the Screen of Green method to bring out its full potential.

At the moment, MTG Seeds has only made feminized seeds available. Because of this, growers must use pre-germination techniques to increase the chances of getting a female then apply Low-Stress Training to keep calyx-filled plants from turning into hermaphrodites.

In spite of its Sativa heritage, Orange Creamsicle has a short indoor flowering period of 7 to 9 weeks. Once mature, growers harvest between 12 to 16 ounces of buds per square meter.

Garden grown Orange Creamsicle usually flowers from the last week of September to the third week of October. Once ready for harvest, it yields at least 16 ounces of trichome-frosted buds per square meter.

What is the Orange Creamsicle strain yield?

Orange Creamsicle yields 12 to 16 ounces per square meter indoors and 16 ounces or more per plant outdoors.

How much THC does Orange Creamsicle have?

What are the origins of the Orange Creamsicle strain?

Orange Creamsicle was developed by MTG Seeds, who were able to create it by mixing Orange Crush and Juicy Fruit together.

Have you ever smoked or grown your own Orange Creamsicle? Please let me know what you think about this marijuana strain in the comments below.