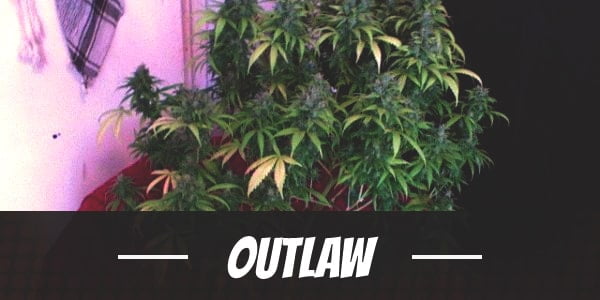 For so many decades, people look upon a cannabis user as an outlaw. No one can blame them though for the use of marijuana remains illegal in many parts of the world. As for the growers, the impression is that they are worse than the users. Nonetheless, things are changing.

Once again, people are rediscovering the many benefits of cannabis. Although it is true that there are far more recreational users than medical, its value as treatment cannot be overstated. Unfortunately, one can say that research into the pharmacological usefulness of marijuana is in its infancy, the number of studies done today has accelerated. As people learn more about the positive uses of marijuana, calls for its legalization has stepped up.

So, when the elite breeder Dutch Passion Seed Company came up with a new hybrid developed by pairing Amnesia with Super Haze, they decided to name it OutLaw – a reference to how the outside world looked at the users and growers.

Both Amnesia and Super Haze are mostly Sativa hybrids. In choosing these two strains, the main reason was to produce a plant that is capable of producing more seeds than usual. That way, they can offer a premium quality marijuana seeds at prices deemed a bargain. They also went against the industry trend where seed bands and breeders opt for plants that reaches maturity early. In fact, OutLaw takes anywhere from 10 to 12 weeks. Nonetheless, the extra two weeks to one month is certainly worth the wait.

Going back to the traditional definition of the word outlaw, it suggests notoriety. In that sense, the name itself fits the effects it has on users. It is a fast-acting strain that hits hard soon after the first tokes. Novice users and those with weak tolerance levels may want to use another hybrid.

For those who dare, expect OutLaw to slam into the head with an electrifying euphoric buzz. Like many Sativa hybrids, it promotes a clear-headed high. But where it differs is the sheer intensity in which users may have a difficult time focusing as opposed to having a sharper focus. Over time, the intense buzzing settles down even as it also starts to trickle down to the body.

OutLaw does not cause a foggy mind or leave one in deep introspection. But during the comedown, most users tend to feel tired after such an intense experience. More often than not, users simply fall asleep. For this reason, this is one Sativa strain that is not used often during the day.

OutLaw has a floral scent blending in with its earthy smell. It also has a note of sour lemon.

Instead of earthy, OutLaw has more of the blend of piney wood and lemon with a sweet and spicy aftertaste. When one thinks about it, nothing about its fragrance or flavor offers any clue to what is to come when used. If anything, its pleasantness can mislead some people into thinking it is not as potent as it is touted to be.

Like typical cannabis, the use of OutLaw brings on a few adverse reactions. These include dry mouth and eyes. Possibly, some users may also experience a mild headache.

The intense euphoric buzz delivered by OutLaw to the mind and the body simply overwhelm users. It wipes out stress and becomes an invaluable tool to fight off depression and other similar or related conditions.

There are also reports of its effectivity as a pain-reliever. Most likely, it is more psychological rather than a physiological response. That is not to say that the strain does not have compounds that help in reducing pains and aches.

Many users report that after using OutLaw, they feel not only energetic but motivated. If there is one thing they could not do, it was to sit down and stay still. As such, some people use it to combat the effects of fatigue.

OutLaw, by all accounts, can be harvested in as early as nine weeks, Dutch Passion recommends letting it reach at least ten weeks. For optimal quality, it is best to allow it to reach twelve weeks. It is not tolerant of cold weather, so when planting outdoors, it has to be in an area where it is warm with plenty of sunshine.

Inside the house, it is best to use hydroponics for a more explosive growth. It is also adaptable to the Screen of Green method. Under expert hands and using the right set up, it is possible for growers to harvest between 14 to 18 ounces of buds per square meter.

OutLaw has a flowering period that occurs during the last week of September to the first week of October. Under proper care, it is possible to harvest up to 18 ounces per plant.

Have you ever smoked or grown your own OutLaw? Please let me know what you think about this marijuana strain in the comments below.