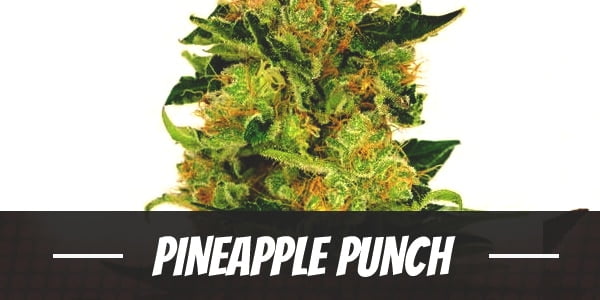 A glass of cold Pineapple Punch in the warm afternoon of a Hawaiian beach sounds soothing. If only the strain featured here can deliver that effect. To a certain extent, it does. But this baby here can do so much more. In essence, this is a very potent strain that promises to take users’ minds elsewhere in ecstasy.

Pineapple Punch is a product of the Flying Dutchmen. It is a cross between a Hawaiian Indica Real McCoy and the ever-famous Skunk No. 1. From the former, the strain inherited its incredible tropical aroma and taste. Meanwhile, the latter is notable for its intense cerebral effects.

Pineapple Punch is the kind of strain one may describe as sneaky. On the surface, it appears to be gentle. In fact, it comes with such a soothing scent that lulls people into false sense of security. Indeed, when looking at tests, at best, it only reached 15%. Because there are so many strains out there today that come with 20% or more, 15% may not seem much. But the fact is that it is still considered to be very potent.

After a few tokes, it takes only a moment before it starts to surge in with an intense ferocity. The energizing mental buzz wipes away any signs of stress. Also, the same surge of energy gives users the strength to do more tasks, vigorously. As one user describes the experience, it feels as if there is a need to do something, anything.

As the cerebral effects continue to buzz, many of its users may start to feel a little hazy. Although less dominant, Pineapple Punch also works itself down to induce complete body relaxation. Meanwhile, from feeling hazy, depending on how much one consumes, some people may lose themselves in their own thoughts.

Used in moderation, the uplifting feeling does not only leave users happy. Some others may feel aroused which makes it an excellent choice for those who are intent on having sex. As noted, if that is the intent, then it is best to use in a small quantity. Otherwise, all the best plans and promise of fun goes down the drain.

It is not often that a strain can come with the delightful freshness of pineapple. This strain does and it mixing it with the smell of earth and wood is reminiscent of being in a pineapple plantation field in the early hours of the morning.

Much of how it smells carry over to its taste. As far as its aroma and taste are concerned, Pineapple Punch is a winner. It is almost impossible for any one person not to love the refreshing flavors of this strain. In fact, a little self-discipline is required as some people may be tempted to use a little bit more and end up using too much.

We have not seen that much reports on how the strain can cause adverse effects. However, a safe assumption is that dry mouth and eyes can be expected. Such is normal with the use of any cannabis, after all.

Symptoms of ill effects are more pronounced once users consume too much. In that case, it may possibly bring on other concerns such as a dizziness or mild headache.

What do depressed people do? Actually, when one thinks about it, it cannot be good. As such, one way to help deal with depression is to use Pineapple Punch. The intense mental high it induces uplifts the spirit of anyone using it, and this same trait can be useful. In the same manner, too, it can also wipe away stress.

Used in a smaller quantity that it does not cause one to be immobile, the energy boosting property of Pineapple Punch helps people deal with fatigue.

In some cases, some people may feel drowsy. Obviously, that is useful to insomniacs and anyone else who may have trouble sleeping. Finally, some may also feel hungry. If they did not, then they definitely will after waking up from a deep slumber. As such, it is useful in stimulating appetite.

Growing Pineapple Punch outdoor or indoor is a choice growers have. If planting in the garden, it will want to be in a warm environment where there is plenty of sunshine. Meanwhile, should it be cultivated indoor, the best choice is to use soil as its medium. It does thrive well enough with hydroponics, but its flavors may not be as rich as when planted in soil.

Pineapple Punch does not grow too tall. At only 4-1/2 feet, it seems to be manageable. But indoor, growers will want to top it early and keep it short. This way, the lateral branching allows light to reach most of the plants.

It only takes nine weeks before the plant is ready to flower. Growers may want to wait for a week more to let it grow sturdier. By harvest time, each square meter can have a yield of 16 ounces.

In an open environment, growers will want to watch out for pests. At any rate, it reaches the flowering stage during the last week of October. Each of these plants can produce 16 ounces or more.

Have you ever smoked or grown your own Pineapple Punch? Please let me know what you think about this marijuana strain in the comments below.