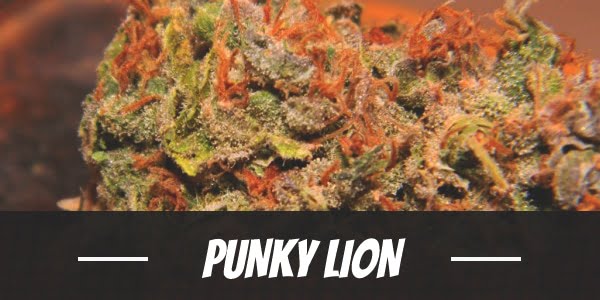 Lions are touted as the King of the Jungle because of their strength, courage, and fierceness. These are the traits that come to mind when people come across Punky Lion. On the one hand, naming it after the beast makes sense. However, there’s more to it than meets the eye.

Lions are great hunters. In some ways, the strain is not far off in that it preys on unsuspecting users and then ensnares them with its powerful Indica effects. In turn, this leads to total body relaxation that lasts quite a bit of time.

Developed by Samsara Seeds, Punky Lion is parented by two of the majestic and legendary strains, Chronic and Matanuska Tundra. As Punky Lion was able to inherit the most functional traits of its parents such as quick flowering, a pleasing aroma, generous yield, and potent mind-body effects, smoking it is like experiencing the best of the three strains at once.

Punky Lion is a creeper. Actually, all Indica strains are, so that is not unusual at all. For that reason, there is a tendency for some people to overestimate their prowess and end up smoking a little bit too much. Once its full effects kick into the body, only then will users know why it was named as such.

First off, it starts with a subtle euphoric rush to the mind and the body. Because it really takes its sweet time, it is easy enough to underestimate the potency of this strain. At times, some people may even feel tingly. Once it takes effect, it slams hard into the body by delivering a sedating physical high the leaves users in utter relaxation.

Most of the time, the mind feels a little hazy, but physically, it is bliss. It does depend on the amount of herb smoked though. If one did overindulge, then the psychedelic effects of the strain begin to have a more narcotic-like feel to it. Either way, one thing is for sure. The lionesque potency of this weed can turn one punky on a couch-lock.

When lit, a combination of sweet and cocoa scent disperses in the air. In a few seconds, users would notice a smell resembling a freshly dug earth.

When it comes to its flavor, it is the same as how it smells. Smoking Punky Lion gives off a prominent sweet, cocoa taste. Puffing the fumes out leaves a slightly earthy aftertaste that sticks to the tongue for a few minutes.

Experiencing dry mouth when smoking cannabis is common. Among the few adverse reactions are dry mouth and eyes. Besides these conditions, some users may feel a tad bit paranoid. Should it happen, most of the time, it is the result of using a little bit too much. At any rate, the unwanted effects are mild and should be gone as the effects of the strain starts to subside.

Punky Lion proves to be a valuable strain for users who want to seek comfort from their medical conditions, whether mental or physical.

Using the strain can dramatically alleviate stress symptoms no matter its severity. While the effects of the weed make its way around the body, people with depression should find managing their condition manageable. In fact, most end up forgetting about the troubles while they bask in a sea of nothing but bliss.

Punky Lion is also quite a handy pain reliever. From headaches to mild body pains and aches, the potency in which it soothes the muscles and substantially lessens or eliminate the physical discomforts.

Before users realize it, most end up sleeping. As such, insomniacs and anyone who needs quality sleep will find it useful.

Punky Lion is a robust plant that grows anywhere between 3 to 5 feet. Its nugs are slender and narrow, and covered in deep green shades. A thick coating of fiery-orange trichomes along with translucent globs of sticky resin surround the buds.

Due to its North Alaskan lineage, one of the traits Punky Lion inherited is resistance to molds and pests. As such, it does not require as much tending as others. Of course, that is not to say that growers can be less careful.

Whether growers choose to plant it indoors or outdoors, the reward at the end is an abundant harvest.

Indoors, Punky Lion should thrive well with soil as the medium or, if growers prefer, hydroponics set up. Once triggered, the flowering period lasts 8 to 9 weeks. During harvest, each square meter can have as much as 20 ounces of yield.

The Alaskan heritage of Punky Lion lets it thrive in a cooler but not anywhere near freezing weather conditions. It will take a certain degree of expertise to cultivate it in such condition. It usually starts to flower by the end of September. After, the celebration begins when picking up to 32 ounces of buds per plant.

Have you ever smoked or grown your own Punky Lion? Please let me know what you think about this marijuana strain in the comments below.