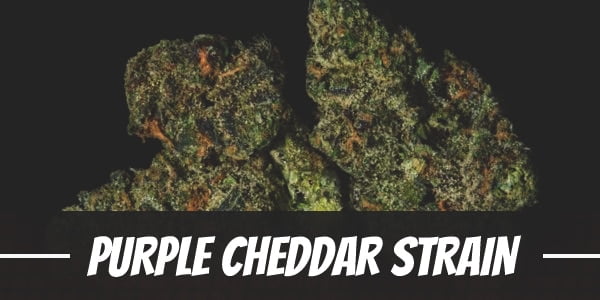 Cheese and Granddaddy Purple are two of the world’s most well-known Indica strains. The former gained attention for its groundbreaking terpene profile, introducing the world to a predominantly cheese-y fragrance and flavor. The latter, on the other hand, is high-yielding, short-flowering plant that produces top-of-the-line buds. Apart from the crystal cover, it catches the eye with its azure and plum violet.

Both pass these attributes to their progeny Purple Cheddar. The 70/30 Indica strain has the right blend of cerebral and physical effects that cater to a wide audience. Not to mention, it has modest THC levels that range from 14% to 17%.

Casual users, for instance, may enjoy the strain to boost the mental faculties like a wake-and-bake companion. If used moderately, of course. Meanwhile, heavy hitters will find comfort in the sedating buzz that comes after taking a few extra tokes of one’s personal limit.

Purple Cheddar could also be used as a natural alternative to certain medicines. It could be used as a painkiller that temporarily alleviates various physical discomforts. At the same time, it offers a reprieve to patients experiencing psychological distress. More importantly, for the medical marijuana community, the price of relief does not come with unwanted side effects.

Purple Cheddar does not slam the mind with an intense head high. Instead, it induces a gentle euphoria that gradually uplifts the mood with each minute that passes. Feeling upbeat, users regain a happy disposition that inspires a positive mindset.

Complementing this is a soothing sensation that wraps around the body. It starts at the temples, carefully ironing out the evident creases resulting from either worry or stress. Next, it chances upon the muscles as it ebbs down through the back of the neck. In all likelihood, one will want to bask in the deep relaxation it provides.

Finding a comfortable spot to lounge on ahead of time is essential in enjoying the stress-crushing experience. It has a sedating comedown that will likely end in users heading out to dreamland with Mr. Sandman. As such, this should also serve as a warning to connoisseurs that pacing, and moderation are necessary when deciding to toke Purple Cheddar during the day or while at work.

Purple Cheddar is a pungent strain that could easily fill the room with its aroma. It has a blend of fruity grapes and refreshing pine. Combusting the buds reveals its rich earthy undertones.

Overtones of cheese explode in the palate upon consumption. Enhancing it are fruity overtones of grape reminiscent of wine as well as an earthy undertone. A refreshing aftertaste follows after as the smoke coats the tongue in pine.

Most adverse reactions to Purple Cheddar constitute red eyes and a cottonmouth as an inevitable result of its drying cannabinoids inhibiting moisture production. Users may ease the discomfort by staying hydrated before, during, and after toking. Depending on the dosage, it is possible for the strain to green one out which consists of dizziness and anxiety as a result of the mind being overwhelmed by its surroundings. It is usually limited to a simple headache however, to be safe, slow the pacing and use moderately.

Users can expect a powerful stress reliever in Purple Cheddar. It has an uplifting onset that dissipates worries and negativities within minutes. Regaining an upbeat disposition, it helps users stay positive while dealing with the overwhelming dread, cynicism, as well as feelings of despair. As such, patients with mental health issues such as depression, anxiety, and PTSD will find comfort in its gentle euphoria.

A powerful analgesic, it provides relief to patients suffering from a myriad of physical afflictions. A soothing sensation ebbs and flows throughout the body, removing it of aches and pains. Its efficacy is especially evident against common discomforts caused by arthritis, inflammation, and joint pains.

Unlike opioid-based medicine, it does not cause untoward side effects such as nausea. In fact, it even addresses such gastrointestinal issues including a lack of appetite. Under the guidance and regulation of a health profession, consistent use of Purple Cheddar could yield good results in bringing back the lost weight.

Drowsiness eventually comes as wave after wave of relaxation settles in the limbs. With its sedating properties, it quickly lulls users to bed and into a deep, unencumbered slumber. Moreover, in enhancing the quality and quantity of sleep, it helps regenerate lost energies.

Purple Cheddar has impressive bag appeal. It is not only eye-catchingly colorful, but also aromatic. Moreover, it is coated in a thick blanket of trichomes.

Its merits are not only limited to its plump buds, but also its growth profile. It has a short stature, thick stalks, and hardy branches. Its immunity against common pests and diseases is quite high too, allowing growers to cultivate the plant just about anywhere.

Its foliage tends to grow denser as it reaches full maturity, inhibiting air circulation in the lower nodes. Thus, pruning the plant is an important part with regard its care. On feeding and nutrition, there is no need to deviate from the usual practices, but the strain could benefit from boosters.

In the right conditions, each square meter yields between 10 to 12 ounces of buds. The short flowerer has a blossoming phase of 8 to 10 weeks.

Growers from the northern hemisphere can expect Purple Cheddar to bloom around the second to the last week of October. One can expect at least 12 ounces of buds per plant.

Have you ever smoked or grown your own Purple Cheddar ? Please let me know what you think about this marijuana strain in the comments below.