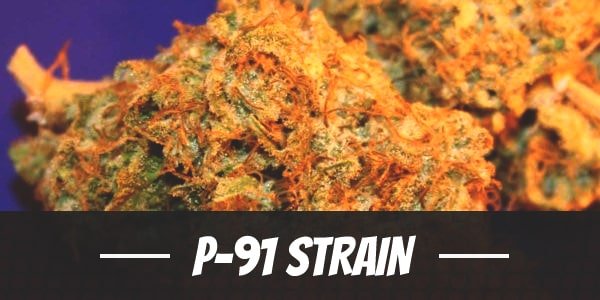 Northern Lights is undoubtedly one of the most iconic cannabis strains in the world. It has been around since 1985, yet its popularity remains. This is because the pure Indica is cherished by users for its versatility.

It could be used both recreationally and therapeutically. It induces a mellow euphoria that generally uplifts the mood, but also manages symptoms of psychological distress or emotional difficulties. For the body, it instills a state of calm that relaxes tense muscles and tight joints while also relieving pain.

Having such talent, it should come as no surprise that breeders would eventually back cross it with itself. In fact, it was done at least three times to develop P-91.

P-91 is different from Northern Lights in many ways. Although it boasts the same emblematic purples and greens, it is not at all a pure Indica. In fact, it is a hybrid with effects that lean toward the cerebral. One could even classify it as a functional smoke or a wake-and-bake strain. Its Indica qualities are still present however they are much more muted and, therefore, not at all debilitating.

Quick to act, users immediately feel P-91’s onset of euphoria. It takes the mood to greater heights, encouraging an upbeat disposition right from the get-go. No doubt, it leaves users feeling giddy and excited for the day to come.

Casual users will find that it also clears the mind. It removes worries, negativity, and distractions. In its place, there is an enhanced focus. It sharpens the senses and improves one’s ability to pick up on various details that are essential for completing a task.

Complementing the productive head high is a relaxing buzz that brings back one’s initial limberness. It starts off as a tingling sensation – similar to a light pressure – that kneads the muscles until it is free of tightness, tension, and pain. Like a well-oiled machine, users move with impressive agility. This makes finishing off all tasks in one’s To-Do list faster and easier.

With that said, P-91 is definitely best used during the day as a wake-and-bake companion. It provides the right amount of invigoration, enough to wake the mind and body from lethargy. It could also be used at night, although users should be careful of the dosage especially since its THC levels range from 17% to 20%.

Initially, one would say that P-91’s flavors are a sweet citrus composed of lemons and pineapples. However, upon closer inspection, its tanginess is also made up of chemical undertones of ammonia.

Some coughing can be expected from toking P-91’s smoke. Its chemical undertones may also make the eyes water. However, it is quickly followed up by a sweeter, richer taste of citric fruits such as pineapple. On the exhale, it leaves an aftertaste of lemons.

Apart from the initial coughing one may experience from the smoke, there is a dry spell that primarily affects the mouth and the eyes. It is usually unavoidable as the presence of moisture-inhibiting cannabinoids are persistent, but easily manageable through hydration. A greater cause for concern is anxiety. In delivering its powerful buzz, it can sometimes overwhelm the mind and stun users with fast-paced thoughts. Avoiding it is easy – pacing and moderation.

Resetting the mind and removing any accumulated stress is one of P-91’s best traits. It delivers a mood-enhancing high that eliminates worries in exchange for a calmer, more upbeat disposition. At the same time, it refreshes perspectives, so users do not dread the overwhelming fear of apprehension at or from work.

Similarly, it also acts as an anti-depressant, anxiolytic, and anti-psychotic that provides comfort to users with depression, anxiety, and PTSD. It not only uplifts spirits, it also temporarily banishes feelings of hopelessness, despair, and dejection. The clarity could also benefit patients with ADD/ADHD.

P-91 also has prominent psychoactive levels which could work as an analgesic. It relieves a wide variety of aches and pains all over the body regardless of intensity and source. It also has anti-inflammatory properties that appease swelling, reduce sensitivity, and redness. Together with its painkilling effects, it could counteract muscle pain, tenderness, joint pains, and arthritis among others. It also does well against symptoms of physical fatigue.

P-91 exhibits many of Northern Lights’ trademark traits. It has dark green leaves, deep emerald buds, and purple undertones that develop into an intense violet when one exposes the plant to lower temperatures. Its stalks, on the other hand, demonstrate wide internodal spacing and could grow up to 7 feet outdoors.

Still, it is not at all lanky. In fact, its branches rarely require support while carrying its heavy buds. Moreover, it is a hardy strain with excellent immunity against many common pests and diseases. Some pruning may be due. As it enters the flowering phase, P-91 quickly develops a dense foliage which could hamper the air circulation in the lower nodes. Left unattended or untrimmed, it could harbor moisture in between its crevices which could potentially lead to humidity-related problems like mold, mildew, or bud and root rot. To this end, growers may supplement the process of thinning out the plant by installing a fan to cast a light breeze on the plants.

TIP: Find seeds similar to P-91 at our seed shop

It takes P-91 between 8 to 9 weeks to fully flower. However, growers can extend the flowering period by a week for extra bud production. Regardless, yields fall between 12 to 14 ounces of buds per square meter.

Growers should see harvestable buds around the second to the last week of October. At harvest, growers can expect at least 14 ounces of buds per plant.

Have you ever smoked or grown your own P-91? Please let me know what you think about this marijuana strain in the comments below.