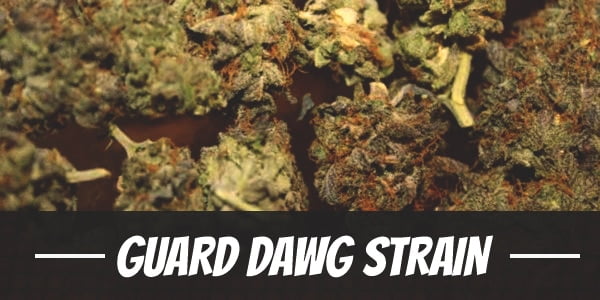 Guard Dawg could very well be one of the most powerful strains out in the market today. Its THC levels almost border on 30% and very rarely falter behind. Upon consumption, it induces a body-centered relaxation that quickly eliminates tightness around the limbs and tension in the muscles. Its comedown is highly sedating, making it a strain best used at night.

Although its cerebral effects take a backseat, it contributes significantly to developing the right mindset for the upcoming body melt. It removes many of the accumulated stress throughout the day or week and lulls users to a cradle of happiness.

It traces its history back to two industry staples. One of which is Abusive OG, a well-received Indica cut of OG Kush. From it, Guard Dawg gained its potency, high, and striking hue. On the other hand, there is Tres Stardawg which has an impressive growth profile. It passes on its nodular structure to its offspring as well as its relaxing body buzz.

RedEyed Genetics have made Guard Dawg’s seeds available to the public. Apart from being easy to grow, the strain is a vigorous yielder that produces enough stash to last for a few weeks. Moreover, the buds are highly attractive. It has a green overtone with flashes of purple and orange that perfectly contrast its hue.

Guard Dawg boasts THC levels of 27% to 29%. As such, users should be wary when it comes to toking the strain. Otherwise, it could induce an overwhelming high that stuns users and locks the body to the couch.

In moderation, however, it delivers a pleasant head buzz that uplifts spirits. It turns the day around as it improves the mood. Feeling happy and upbeat, a few giggles may escape the mouth from time to time especially when one uses it with a group of like-minded friends.

30 minutes to an hour after the initial onset, a tingling sensation forms around the temples. It ebbs down to the lower extremities, enveloping the body in deep relaxation. As it persists, it plants a heaviness in the limbs that makes the eyelids droop. The sedating comedown eventually entices users to sleep.

Guard Dawg exudes an earthy aroma that enthralls the senses at the first whiff. It has a sweet caramel undertone complemented by an overtone of coffee. Breaking it apart or combusting the buds, it produces a woody fragrance.

Guard Dawg tastes very much like caramel coffee. Apart from that, it is slightly sweet with rich earthy undertones. On the exhale, it leaves a woody aftertaste.

Guard Dawg casts a dry spell that mainly affects the eyes and the mouth. It is usually unavoidable, but users may down a few glasses of water to manage the discomfort. Avoiding caffeinated and alcoholic drinks will also prevent it from exacerbating. There is also the possibility of dizziness but that is rare.

It is not wrong to assume that Guard Dawg is a recreational strain. After all, its THC compounds are among the highest in the industry. Still, its therapeutic effects are not to be discounted.

Its uplifting head high eliminates stress and manages psychological distress. It provides comfort to patients suffering from depression, anxiety, and PTSD. At the same time, it improves the mood and uplifts the spirits.

In high levels, the psychoactive compound can also turn into a natural analgesic that relieves various aches and pains. Its anti-inflammatory properties, on the other hand, reduce swelling, sensitivity, and redness. This helps prevent the muscles from further contracting and causing pain. As such, it is effective against conditions like arthritis, joint pains, and inflammation.

A drowsiness eventually takes over as users become free from mental and physical inhibition. A drowsiness takes over and lulls one to bed afterward. Its sedating buzz also improves the quality and quantity of sleep.

Guard Dawg is an excellent beginner’s strain. It is short and could fit in most environments. Growers have the most advantage indoors where factors like lighting, temperature, and humidity are adjustable.

Compact and dense, Guard Dawg will require some pruning and trimming from time to time. It removes dead branches or leaves and improves light circulation in the lower nodes. As an added benefit, it also boosts nutrient distribution to healthy budding sites; further improving bud production.

A carbon filter may be a necessary provision when cultivating Guard Dawg in a dedicated tent or small growing room. It manages the pungent aroma that will, no doubt, alert nosy neighbors of the beautiful plant growing inside its designated area. The filter also ensures that one’s nasal senses are not overwhelmed by the smell it produces during care.

Outdoors, it thrives in a sunny and dry climate. But, being a sturdy strain with impressive resistance to common pests and diseases, it could also flourish in the northern hemisphere where it is generally colder. Not only that, the lower temperatures help add bag appeal by bringing out its purple undertone.

Indoors, it has a flowering period of 7 to 9 weeks. It produces between 10 to 12 ounces of buds per square meter once ready for harvest.

Guard Dawg flowers around the last week of September to the middle of October. Growers can expect at least 12 ounces of buds per plant.

Have you ever smoked or grown your own Guard Dawg? Please let me know what you think about this marijuana strain in the comments below.