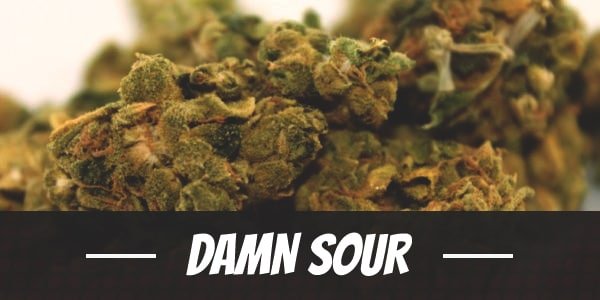 Damn Sour might just be the best wake-and-bake strain out in the market right now. Though fairly new, its energizing citric flavor keeps drowsiness at bay so users can enjoy a fun-filled productive day. Meanwhile, its mentally stimulating effects open the mind to new ideas.

One of the strains used to create this extremely pungent strain is Sage N Sour. An award-winning strain, Green House Seeds picked it for its short flowering time as well as the strong cerebral buzz it delivers. Sadly, Damn Sour’s breeders never revealed which plant it paired with Sage N Sour. Although there is some speculation that the strain is a backcross of its known parent, this remains unproven.

Nonetheless, Damn Sour has garnered attention for its extreme pungency. Its harshness has even made people utter ‘damn, sour’ under their breaths after taking a few swigs of the strain. Still, it is revered as a premium strain.

With exceptional THC levels, Damn Sour can easily overwhelm even the most experienced of users. In moderation, however, it’s up to 22% THC is quite enjoyable. Sending a euphoric buzz to the head, it sets fast so users can turn their mood around in no time at all. Most of the time, this leaves users feeling a sense of happiness radiate from within.

But, that is not all. Damn Sour also encourages creativity. With a clear mind, thoughts flow freely to create innovative solutions. Bursting with new ideas, many users thread on tasks full of enthusiasm. Because Damn Sour does not sedate its users, it is best consumed in the morning.

radually, a tingling sensation ebbs down from the neck to the spine. As it intensifies, the light pressures begin to relax the body. The mental stimulation and the uplifting body buzz help induce a spacey high for some. But for most, it rouses the appetite and gets people hungry.

Those who enjoy the fragrance of unripe lemons will truly enjoy Damn Sour. By the dozens, its sour scent can easily overpower sensitive noses. A single bud, on the other hand, is reminiscent of citrus. When grinded, it releases a subtle note of earth which quickly turns to diesel once the nugs are combusted.

Overall, this strain has a pleasant aroma. However, some may find the smell to be quite overwhelming. Of course, this all depends on the user’s personal preference.

Damn Sour has the overpowering taste of citruses like grapefruit and lemon. However, it can also be as sweet as ripe fruit. Drawing in the smoke, a delightful chemical flavor can be savored.

Like all strains, Damn Sour has its fair share of adverse reactions. Two of which are caused by dehydration and these are dryness in the eyes and the mouth. Apart from these, users may also experience headaches and dizziness. Thankfully, such reactions are no big deal. Besides being mild, they are easily mitigated.

Damn Sour may also cause some people to feel paranoid. Thus, it is best to be mindful of the amount being consumed

Though Damn Sour is a recreational strain, its cannabinoids and psychoactive compounds have some medicinal value. When combined, they can ease a myriad of behavioral and physiological conditions.

Damn Sour’s happy head high positively enhances moods. As such, it can positively ease the burden of those living with depression or PTSD. Its energizing cerebral buzz also melts away any accumulated stress.

The strain’s Indica effects also make it viable for easing pains. Its potent analgesic properties address a variety of aches and pains including (but not limited to) headaches, nausea, and cramps. It can also make for a great appetite stimulant.

Damn Sour is not an easy plant to cultivate. It requires extra care and constant upkeep. Not only that, but growers should also have knowledge of hydroponic systems as well as a background on high EC feeding schedules if they want their seeds to grow well.

Of course, this is not to say that beginners cannot grow damn Sour. Home growers with sufficient knowledge about the Screen of Green (SCROG) method can always try out their green thumbs.

Other than that, odor control measures such as carbon filters and air purifiers are a necessity when growing this strain. Its strong pungent smell may attract unwanted suspicious or, worst, affect the growth of other strains around it.

Indoor growers can expect Damn Sour to flower in 8 to 9 weeks. Once mature, as much as 24 ounces of buds per square meter can be harvested.

Have you ever smoked or grown your own Damn Sour? Please let me know what you think about this marijuana strain in the comments below.