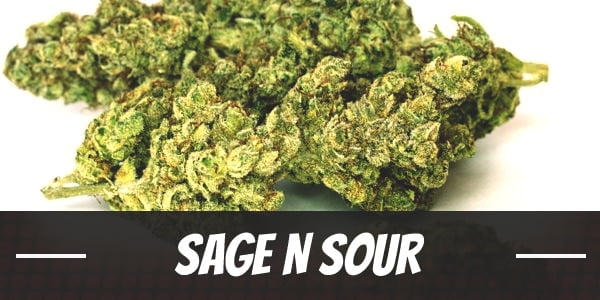 Every cannabis user knows how strain names can be very creative at times, up to the point when they start to sound really weird. Basically, it seems like the sky is the limit when it comes to naming a particular strain.

Sage n Sour is a good example of that. At first, one might think that it is a pretty strange name for a weed. If anything, it sounds more like a dip for your French Fries than something you would smoke and get high with.

However, cannabis names can be very deceiving. In fact, Sage n Sour is not your typical strain. It has a reputation to uphold. The following information will expound more on that point.

The Sage n Sour is said to have originated from the Netherlands and bred by TH Seeds. It is a cross between one of New York City’s finest, Sour Diesel and the West Coast’s pride, SAGE (Sativa-Afghan Genetic Equilibrium).

SAGE has been registered as a medical marijuana by the UK government while the Sour Diesel boasts of its infamous strength and unique flavors and aroma.

With an impressive lineage, it is natural that the cannabis community has a high expectation for Sage n Sour. Fortunately, it looks like it has lived up to its superior lineage.

Sage n Sour contains a THC level that can range from 16% to 20%. This makes the strain a highly potent variety just like its parent, the Sour Diesel.

The Sativa content in Sage n Sour is relatively high at 75%. This gives the strain the ability to induce a strong cerebral high. At the onset, some users might feel pressure on the face and the eyes. This continues to build up for the next fifteen minutes before it starts to slowly subside.

During this time, one is bound to feel uplifted and happy, and for a few others, euphoric. Depending on the tolerance level, some people could experience a heightened sense of focus and a boost in creativity.

Contrary to the powerful kick that rushes in the cerebral high, the Indica properties of Sage n Sour creeps in slowly. Because of the sedative-like properties, users of this strain start to feel their body relaxing.

Sage n Sour is a good strain to use in gatherings among friends as it does make a user feel more sociable. It could be used during daytime and in the evening. If its parent, Sour Diesel, is too strong, then this offspring could be a better choice.

Due to the intense cerebral high and potency, Sage n Sour is not recommended for beginners and anyone who has never used cannabis before.

Cannabis smokers who are familiar with Sour Diesel would almost always recognize the smell of Sage n Sour. Although it is not as pungent, it does have the same fragrance.

This strain has a sour odor, hence its name, blended with hints of an earthy and herbal smell. The smoke itself has a lemonier incense-like smell.

Just like its aroma, the properties of its Sour Diesel parent also dominate the overall flavor of Sage n Sour.

It has a sweet taste with a hint of sage. As the user exhales the smoke, it would taste more like sour earth on the palate distinct and flavorful.

It is not surprising at all that Sage n Sour also has the common adverse reactions that can be acquired from other types of strains.

Dry mouth is the most commonly reported reaction from using Sage n Sour. Another common occurrence would be feeling dry eyes.

Other milder reactions may include episodes of dizziness, paranoia, and headache.

As mentioned, one of its parent strain, SAGE, is recognized as a medical marijuana in the UK. It is no wonder that the same medical benefits should be inherited by any of its offspring.

One the most popular medical benefits that the Sage n Sour provides is its ability to relieve stress and depression. This can be attributed to its high Sativa content that can improve one’s mood. Other benefits associated with this strain may include the alleviation of chronic anxiety, seizures, PTSD and ADHD.

Sage n Sour are also sought for use by medical cannabis users to relieve headaches, eye pressure, and fatigue.

Sage n Sour could be grown outdoor or indoor.

Typically, Sage n Sour should be grown outdoor with a warm climate.

If grown indoor, the breeder recommends the use of a DWC setup for its cultivation indoors. Hydroponics may also work as well by placing the plants inside a large container while utilizing an HPS lighting.

Overall, Sage n Sour requires prospective growers to at least have some level of experience and knowledge in growing cannabis, in general, to successfully cultivate this particular strain.

The flowering time of the Sage n Sour when cultivated indoors should take 9 weeks. This will produce an indoor yield of 12 ounces per square meter.

If cultivated outdoors, you should expect your buds to be ready for harvest by early October. The expected outdoor yield can reach up to 24 ounces per plant.

Have you ever smoked or grown your own Sage n Sour? Please let me know what you think about this marijuana strain in the comments below.