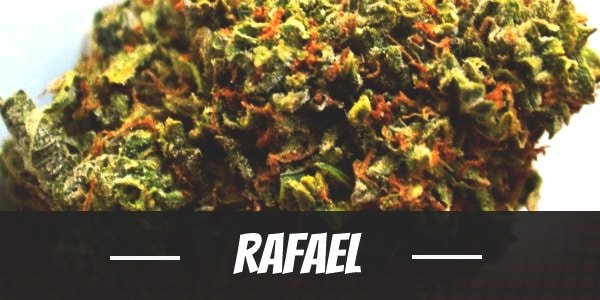 Rafael (also called Raphael) is a high CBD strain developed by Tikun Olam, a company based in Israel. The choice of its name is a tribute to the “Godfather of Cannabis” in the country. What sets it apart from other strains is the “high” it delivers without the psychoactive effects.

Among the most notable contributions of Prof. Raphael Mechoulam is his research on:

Tikun Olam, on the other hand, has been developing strains for medical use. In many of the varieties they bred, a notable feature is an absence or less pronounced psychoactive effects. For some recreational users, these strains are perfect. However, there are also people who are after the extreme effects associated with most others strains. In that case, they are better off using other hybrids.

For medical cannabis users, here is yet another strain that justifies the legalization of marijuana use. Almost devoid of THC, the “high” it delivers is general relaxation. But more important, it is the incredible value of its high CBD to patients of specific illnesses.

Tikun Olam has invested a lot of money into its research and development facility. Hence, it is understandable why they would want to keep much information confidential. For instance, we do not even know the genetic lineage of Rafael. Furthermore, they will never discuss the process involved in its breeding. Needless to say, what is important is that this hybrid is now available and will be of significant benefit to people in need.

Rafael only has 1% to 2% THC, but that does not mean it is not potent. Of course, at such levels, it does not have psychoactive effects. In other words, it cannot overwhelm users or cause psychedelic or narcotic-like effects. It will also not leave users “spacey” or disoriented.

People who use the strain often feel a mild relaxing sensation sweeping into the body. Generally, it leads to feeling uplifted and for some, may even be to the point of elation.

About 80% of the plant is Sativa. As one can see, the lack of THC means there are no buzzing or ebbing mental high. Still, the strain can help clear the mind which, in turn, allows users to have better focus.

In case people use more of Rafael, then its Indica side will have a mild sedative-like effect on the body. It is then likely that users will soon fall asleep.

One thing people do not like about medicine is its smell. Rafael, though, even if used for medical purposes is different in the sense that it can be very appealing. It emits an odor that is reminiscent of the fresh earth with the mixed aroma of herbs and sweet fruits.

The delightful odor of Rafael carries over to its flavors. Users should find it not only smooth to use but also appreciate the lingering sweet fruity aftertaste.

Using even a little bit too much can cause side effects. At least, that is the case with high THC strains. However, the near absence of THC in Rafael does not mean it is entirely free of any unwanted effects.

Because it is still cannabis, the common side effects can be pronounced, depending on the amount used or personal tolerance limit. Dry mouth and eyes remain the same adverse reactions as with other strains.

So far, though, there are no other side effects reported.

The first thing that comes to mind whenever encountering a high CBD strain is its benefits. At 15% to 18%, it is arguably the highest among the thousands of hybrids made available over the past several decades. At that level, also, it is more than likely to be a good treatment alternative for seizures and epilepsy.

Another benefit of using Rafael is with pain relief. Most users have reported how the strain helped ease pains associated with chronic illnesses and muscle spasms.

Once the amount is increased, the strain is not only relaxing, but it becomes useful for inducing drowsiness. Patients who need to sleep, without a doubt, can benefit from having a quality sleep.

Rafael is not available in seed forms. It is also not likely that anyone can get ahold of its clipping for cloning. However, we can make an assumption on its growth based on its trait.

We guess that even in Tikun Olam, they use cloning to propagate the plant and cultivate it for commercial purposes. Being Sativa-dominant, it may have the traits of one. Hence, it will probably grow more than 6 feet in the outdoors. It will also thrive in a Mediterranean climate.

Rafael should thrive even better indoors in large greenhouses. Unlike cultivating cannabis in the house where growers are often forced to keep it very short due to space constraints, the company can afford to have a much more significant space for the plant to have more room to grow.

Generally, it already has a great fragrance and taste. Instead of focusing on such, it is far better to grow it hydroponically and increase its yield. Rafael has large and dense brown buds that are covered with orange hairs.

Rafael will likely have an indoor flowering time of at least 10 weeks. As mentioned, it is best to grow using hydroponics, and while it is possible to trigger it a week earlier, it would be in the best interest of the whole batch to wait until all plants are ready. Come harves time, it should be able to produce at least 12 ounces of buds per square meter.

Outdoors
Grown outdoors, the plant will want to be in a warm climate where there is plenty of sunshine. Under the care of experts, they should be able to produce over 12 ounces of buds.

Have you ever smoked or grown your own Rafael? Please let me know what you think about this marijuana strain in the comments below.