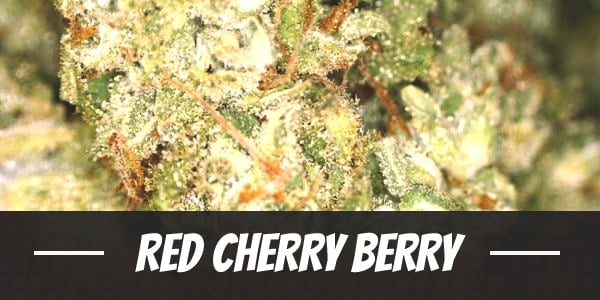 Although it was not bred for medical cannabis users, Red Cherry Berry is unique in the sense that it comes with 1.2% CBD. Of course, it cannot compare to strains that come with an insane 12% to 20% CBD, but it is still very high compared to the vast majority of hybrids in the world.

According to its breeder, Barney’s Farm, they backcrossed Skunk No. 1 with its North American Indica ancestor, to be more specific, a strain from California. It should be noted that through the decades, there are likely variants of Skunk No. 1. Hence, the consensus on the genetics of the original strain (Afghani x Acapulco Gold x Colombian Gold) bred by Sacred Seeds Co. back in the 70s should not matter.

At any rate, Red Berry Cherry did inherit potent Indica traits that promise to deliver deep relaxation. It also retains the ability to induce a gentle cerebral high. If there is one other thing that makes it hard for users to ignore, it is the insanely delicious fruity odor it emits.

Red Cherry Berry is the type of strain that sends people to cloud nine before taking back to the ground hard, and in a good way. With up to 18% THC, it is not at all lacking when it comes to psychoactive properties. For some people, it may even become overbearing. Having stated that, beginners should use only a small amount and resist the temptation to take a couple more tokes due to its irresistible scent and taste.

It begins by sending a euphoric cerebral buzz that energizes the mind and the body. Users tend to have a clear head and sharper focus. Not only that, but Red Cherry Berry also affects the behavior by inducing an uplifting sensation that leads to an overwhelming sense of happiness. Hence, it is not surprising to see people giggling or laughing.

Early on, staying productive is made easier as the strain can make users feel motivated. However, once the physical traits manifest itself, it kicks in hard. Almost instantaneously, the heavy-hitting Indica side brings on a sedative-like property that not only helps release the tension from the body but also induces deep relaxation. Even when used moderately, the chances are high that most people end up in a couch-lock. It is not likely for Red Cherry Berry to induce mental confusion, but it does leave users in a dreamy high.

Of the best smelling strains in the world, Red Berry Cherry is high up there with the elites. It emits a pungent blend of earth and berry with a sweet note.

Red Berry Cherry has a different take when it comes to how it tastes. Unlike many others in which the scent carries over, it deviates with an added spicy note while retaining its sweet and highly delectable berry flavor.

No matter how exceptional a strain is, and there are many including Red Cherry Berry, its use also means that along with the many wonderful effects, it also comes with adverse reactions. Fortunately, these are often mild such as dry mouth and eyes.

In some cases, though, some people may use too much and end up having other conditions. One of them is feeling dizzy; another is having a mild headache.

As mentioned, Red Cherry Berry is unique in that it comes with a higher-than-average CBD. Still, it is not enough to be used as a treatment for epilepsy, seizures, or even tremors. However, it still provides medical benefits that, in some ways, is more effective than many other recreational strains.

By inducing a sense of happiness, the strain is quite vicious when it comes to eliminating stress. Consequently, it becomes useful as an aid in battling depression and other similar conditions.

Interestingly, although Red Cherry Berry can cause a mild headache, it is actually used by many others for relief from the same condition. The trick here is to know how much to use.

To a certain extent, this strain can also be used to lessen or eliminate mild pains and aches. Granted that it has a heavy-hitting body high and may leave people on a couch-lock, it becomes conducive to rest and sleeping.

By all accounts, Red Cherry Berry is among the easiest strains to cultivate. Growers have a choice of planting it indoors or outdoors. Regardless of where, it is also convenient to conceal as, at most, it grows up to 3-1/2 feet.

Red Cherry Berry is ready for flowering in as early as seven weeks. Once ready for harvest, growers can expect between 14 to 18 ounces of buds per square meter.

The plant thrives well in a temperate to warm environment. It is one of the reasons why it is relatively easy to cultivate. By the third to fourth week of September, it should start flowering. During harvest, each plant should be able to produce 18 ounces of buds or more.

Have you ever smoked or grown your own Red Cherry Berry? Please let me know what you think about this marijuana strain in the comments below.