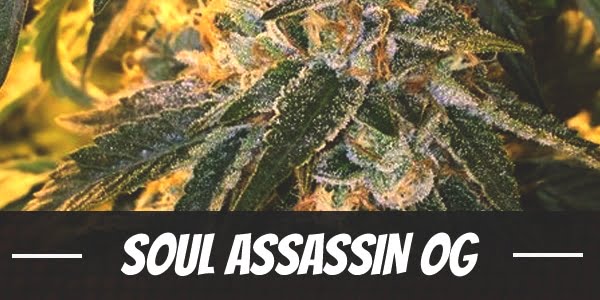 So heavily is marijuana embedded in the hip-hop industry, that a group of artists and rappers from the subculture have created a strain as a tribute – Soul Assassin OG.

Soul Assassins, the group of musicians and hardcore stoners that created the famed strain, never disclosed the genetics of their hybrid. But, many believe that it hails from herbs that are acclaimed for their own notable impacts.

As indicated by Soul Assassin OG’s name, one can conclude that part of its genetics comes from the original ocean grown cannabis. Making up the genetics of more than half of the West Coast cannabis varieties, OG Kush induces a cerebral euphoria that crushes away stress – the same trait passed on to its descendant.

Though unknown, many agree that the hybrid making up the other half of Soul Assassin OG’s genetics is Lemon Thai. A cross between pure breeds from Thailand and Hawaii, this variety has a minty lemon scent with powerful Sativa effects.

Both these parents influenced the characteristics of their offspring, Soul Assassin OG. It has the signature Kush scent with the citric flavor of Lemon Thai. Besides that, both the distinguishing effects of its origins melded splendidly into Soul Assassin’s cannabis.

Soul Assassin OG is a strain that is not to be underestimated. Insanely potent, its THC content can go up to 20%. Knowing this, users should use it moderately.

With every puff of Soul Assassin OG, the hard-hitting euphoric high invades the mind. It drops inhibitions as users turn upbeat and put any negativity to rest. In turn, it leaves many users to feel a sense of happiness welling from the inside.

Despite its incredibly high potency, Soul Assassin OG does not overwhelm users with its Sativa effects. Instead, it induces a clear-headed high. Even as the mental clarity intensifies, it only works to the benefit of the user as it increases focus. Anybody looking to get creative can benefit from smoking this strain. Another thing it does is to motivate users to be active as it does deliver a boost in energy.

After some time, the strong Indica influence reveals itself. Beginning from the temple, a buzzing but relaxing sensation spreads all over the body. In most cases, many users tend to feel the munchies. Whether one can or cannot get up to eat is dependent on the tolerance level. Some can while others are locked on the couch while delighting in sheer relaxation. Eventually, though, most people are likely to end up sleeping. Hence, Soul Assassin OG is best used late in the afternoon or early evening.

Smoking large amounts of Soul Assassin OG leaves cannabis connoisseurs completely sedated and possibly dysfunctional. As alluded earlier, it is best to gradually build up the dosage or stay well within limits.

Like its parent strain OG Kush, Soul Assassin OG produces pungent diesel fumes. Beneath the overpowering diesel is an earthy scent that of pine. These are later on balanced out with a refreshing hint of lemons.

Soul Assassin OG’s flavor mimics how it smells – pungent and citric. When toked, it tastes similar to sweet lemon tea. On the exhale, it is herbal and spicy. However, it can get quite harsh on the throat and cause a bout of coughing.

When smoking marijuana, users often experience dehydration. It usually causes dryness in the mouth and the eyes. But, these are typical of marijuana use and are mild for the most part. Thus, users often ignore such symptoms.

Apart from the dryness, users may also feel a little dizzy as well as feel mildly paranoid or anxious. The degree to which these conditions become obvious depends on two things. First, the tolerance of users. And, second, the amount of marijuana smoked.

The strain’s hard-hitting euphoric effects make it the perfect stress killer. By inducing a sense of happiness, Soul Assassin OG comforts those who battle with depression or PTSD. Thus, it makes the hybrid a great anti-depressant as well.

But, its medical benefits are not only limited to the mind. With its psychoactive properties and its Indica dominant genes, Soul Assassin OG obtained sedative characteristics. Inducing soothing physiological effects, any chronic pain or tension is relieved.

The same compounds responsible for the high are also excellent for stimulating the appetite and sleep. Undeniably, it is not surprising that people feel a strong urge to either eat, sleep, or both.

Though sturdy due to its Indica lineage, cultivating Soul Assassin OG is not an easy process. It requires more than the minimal effort to grow. One can say that a successful harvest would depend heavily on the experience and skill of its breeder. Thus, it is not a strain for novices.

In an artificial environment, Soul Assassin OG has a flowering period of 8 to 9 weeks. Because grow areas can be controlled, problems are less likely to occur. Once ready for harvest, the strain is expected to yield up to 17 ounces of buds per square meter.

Growing any marijuana plant outdoors is a wager. With unpredictable weather and the risk of pests ravaging the plants, it entails backbreaking effort. Yet, the results and yields of growing Soul Assassin OG in a garden outside means producing more than 16 ounces of buds per plant. And, that is a risk any grower is willing to take.

Have you ever smoked or grown your own Soul Assassin OG? Please let me know what you think about this marijuana strain in the comments below.